MANILA – Employees of the Metro Manila Development Authority walked out from their office to call on the agency to pay their Collective Negotiation Agreement (CNA) incentive.

“I am very happy that a lot went out of our office today to protest and pressure MMDA to give our benefit,” Fe Albaña, a streetsweeper of 35 years for the MMDA, said.

Albaña, a widow, said she somehow managed to raise her six children with her meager salary, which is roughly $175. If the CNA incentive would be distributed to the employees, she said, it would be of big help to her and to other workers receiving low salaries.

Through their union Kapisanan para sa Kagalingan ng mga Kawani ng MMDA (KKK-MMDA), workers signed their collective negotiation agreement in 2011, which provides that they are entitled to receive $595 each. The General Appropriations Act states that the savings of government agencies should be used primarily to provide compensation and benefits.

Along with other fellow MMDA employees, Albaña chanted, “Chairman Tolentino, don’t be frugal. Give us what is just!” 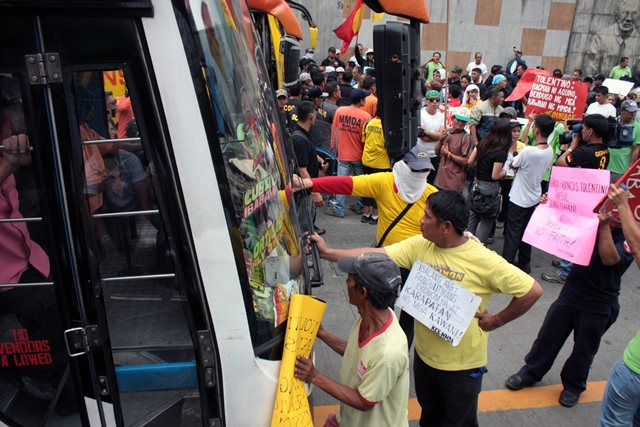 “We will not stop because we have a legal basis for what we are asking for,” Thess Gonzales, secretary general of Kapisanan para sa Kagalingan ng mga Kawani ng MMDA, said in Filipino during the protest action.

Since workers found out about the savings, they have been pressing the MMDA administration, including the mayors of cities within Metro Manila working with the agency, to distribute the CNA incentive but “the talks with the management just went in circles,” KKK-MMDA said in their statement.

Instead, Gonzales was told by MMDA officials during their dialogue that the savings would be used to pay for the agency’s debts, citing tipping fees or the money that local governments are receiving to accommodate garbage from cities under MMDA.

Last Nov. 26, MMDA workers said about two platoons of members of the Sidewalk Clearing Operations Group dispersed their protest action during the agency’s flag ceremony. Workers were told that they were merely following orders from MMDA chair Francis Tolentino. Gonzales was dragged by the members of SCOG out of the venue.

Gonzales said she was brought to the hospital for a medico legal examination. When she returned to MMDA’s office along EDSA, the security guards told her that she could no longer enter their office’s premises. “But I asserted my right. The guard was very apologetic though. He said he is just following orders and might lose his job if he allows me to enter,” she told Bulatlat.com.

In a statement, KKK-MMDA criticized the agency’s decision to bar union leaders from entering their office, saying that it kept them from doing their work.

Gonzales said she would file a case against Tolentino and MMDA’s general managers Maximo Dilla and Rodolfo Figuerroa for physical injuries, harassment and abuse of authority. “I am not going to file a case against those job orders,” referring to members of SCOG, “because I know they were just being forced to follow orders,” she said. 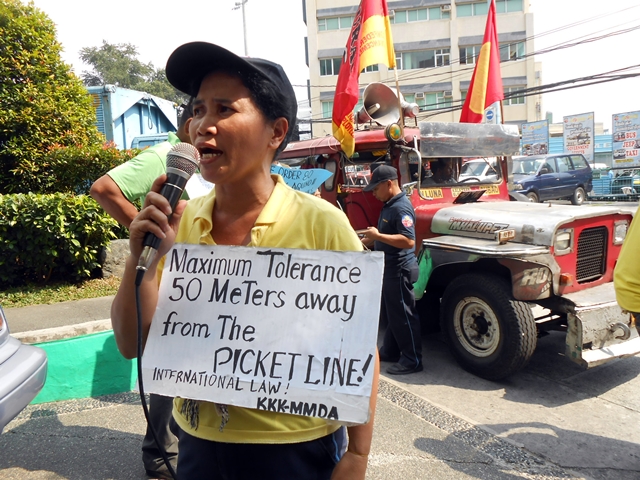 “We criticize all the retired generals and consultants hired by chairman Tolentino to head the Traffic Discipline Office that meddles with the affairs of the traffic division and the permanent employees of MMDA,” the KKK-MMDA said in a statement, “They are being paid with big salaries when our own chairman tells us that the agency does not have funds.”

The protest action has resulted to heavy traffic along EDSA after employees blocked all five lanes, where more than 300,000 vehicles reportedly pass each day. But workers said it would not reach this point if only the MMDA administration gave their CNA incentive.

Ferdie Gaite, president of Courage, a national federation of government employees union, said MMDA’s refusal to give the employees’ incentive is not just. “You are the ones who work in the middle of the streets. You are also the very same people who are often vulnerable to verbal abuses because of your duty. Yet, you do not receive a decent salary and benefits that are guaranteed by our law,” he said.

“We are apologizing to fellow commuters who are caught in the traffic jam. This would have never happened if the MMDA administration listened to the employees during their dialogue,” Gaite said.

Employees from other government agencies attended the protest action to show their support for MMDA workers. “To the MMDA, there would be no traffic here in EDSA if you were not hard-headed,” Mar Aguilar, president of Sandiganbayan Employees Association, said.