Bae Bebeth Calinawan Enriquez, a refugee in her own land

MANILA – A petite young mother, Bebeth Calinawan Enriquez had been through hell.

In April, Bebeth, her husband and their five children were among the 34 Mamanwa families who left their homes in Palidan, Mahaba, Cabadbaran, Agusan del Norte for fear of soldiers who have encamped in their community.

In other parts of the province, more than 200 families have fled their homes in a series of evacuations due to bombings and strafing incidents. The Minimax Gold Exploration and SR Mining Inc. are eyeing the area for mining operations.

“The military wants us, Lumads, to go to pave the way for mining,” Bebeth said in the local dialect.

“At around 4 p.m. that day, we were on our way home when we saw soldiers of the 36th Infantry Battalion at the farm. We told them: ‘Sir, we are civilians.’ Suddenly, they fired at us,” Bebeth related. 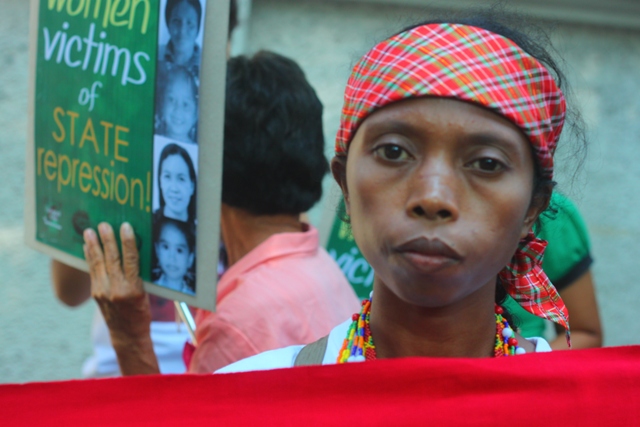 Bae Bebeth Calinawan Enriquez is one of the thousands of internal refugees in Mindanao.(Photo by Ronalyn V. Olea / bulatlat.com)

She was with her parents, an uncle, an auntie and a female cousin. “They kept shooting at us for 30 minutes.” The soldiers, about 60 of them, wore Army uniforms and combat boots.

They ran in different directions. Bebeth, who was in front of the group, sustained four gunshot and four shrapnel wounds. She crawled for hours until she reached the Agusan River where she lost consciousness.

She woke up early morning of the next day and sought help from a couple who passed by the river. The man went to the village hall of Putting Bato to ask for help. At that time, soldiers were stationed in the village and went to see Bebeth.

The soldiers took her to Bangkasi in Butuan City, the camp of the 401st Brigade of the Philippine Army. The soldiers told her that if someone asked what happened to her, she should say that the New People’s Army (NPA) were the ones who inflicted harm on her.

Worried about her, Bebeth’s father went to a local radio station and related what happened to them, hoping to find Bebeth. “After hearing my father, they took me to Evangelista Hospital in Cagayan de Oro City.”

The military announced she was a victim of a landmine planted by the NPA. For one month, she stayed in the hospital. Two female soldiers guarded her during the day and two male soldiers at night.

When she was eventually released from the hospital, Bebeth told the truth – that soldiers, not the NPA, were the ones who shot at them.

They filed charges against the military before the Commission on Human Rights (CHR) in Butuan City and the case is still pending.

Months after she came back to the community, soldiers arrived. All the 34 families in the community evacuated and stayed in Butuan City for four months.
Evacuation spelled hunger and disease for the Mamanwa tribe, especially for the children. They relied on dole-outs from various groups and government agencies hardly extended any assistance.

“The provincial government wanted us to go back even with the military presence,” Bebeth said.

When they solicited help from the National Commission on Indigenous Peoples (NCIP), they were given 30 kilos of rice for the 34 families.

They returned to their community in August and found their homes gone. “Our homes were burned down, our church was burned down. Our crops destroyed.”

They started rebuilding houses from abaca and other indigenous materials. They planted crops again but they experienced hunger as they had to wait before they could harvest their crops.

“The soldiers have not left. They even block the food donated to us by various organizations,” Bebeth said. “They said we would give food to the NPA.”

The military allows only three sacks of rice to enter the community every week. For 34 households, three sacks would not be enough.

“Now, my children have stopped schooling because we rarely have anything to eat,” Bebeth said.

“In the eyes of the military, we are weeds that they can easily uproot,” Bebeth said.

She has traveled from her province to call the attention of the national government.

“I have come here, hoping that our voices would be heard,” Bebeth said. “We want the pull out of the military from our villages. We want a stop to the killings of Lumad. We oppose mining in our ancestral land.”