MANILA – Last year it was Sendong, now it was Pablo. The Aquino government doesn’t learn. This is the bitter conclusion of Mindanao indigenous peoples and environment groups leading a ten-day Lakbayan to Manila. They arrived Nov 30 in the capital aiming to raise calls right here “to stop the killings brought about by large-scale mining, and to press accountability of the companies and the state for the attacks on environment advocates and communities.”

Recently, the environmental destruction caused by large-scale mining devastated the lives of another thousand more people. These people are now either dead or missing and feared to be dead in Mindanao, after the latest supertyphoon’s rains and winds brought waves of mud, water and logs descending from the denuded mountains of Compostela Valley.

Among the hardest hit by the strong winds, rains and resulting floods are the poor peasants especially in Davao Oriental and Compostela Valley, as well as in Southern, Northcentral and Northeastern Mindanao, and Leyte, Cebu and southern Negros who lost their homes and livelihood, the Information Bureau of the Communist Party of the Philippines said in a statement.

Reports claim President Benigno “Noynoy” Aquino III was stunned by the number of deaths. But he really should not have been shocked, if he were indeed shocked, because his policies have brought all these about, according to various progressive peoples’ organizations.

Higaonon leader Datu Jomorito Guaynon of Bukidnon chided President Aquino for dodging the real issues when his administration blamed illegal loggers and small-scale miners. Guaynon said Aquino is not “learning from the lessons of the past.”

Guaynon, chairperson of the indigenous people group KALUMBAY, headed an environmental mission after the Sendong tragedy about a year ago, which left 1,257 people dead and 13,337 houses damaged.

The mission concluded that the primary reasons for the massive devastation caused by Tropical Storm Sendong were the extensive forest denudation and destruction of the Mt. Kitanglad and Mt. Kalatungan watershed areas, and the encroachment of vast agribusiness plantations and unabated mining and quarrying operations in Bukidnon, located above the cities of Cagayan de Oro and Iligan.

“Hundreds of communities in Mindanao have been rendered vulnerable to natural disasters due to the proliferation of large-scale extractive industries being promoted by the Aquino administration through existing government policies and programs such as Executive Order 79 and the Mining Act of 1995,” Stella Matutina, a Benedictine nun and secretary-general of environment group Panalipdan! Mindanao (Save Mindanao), said in a statement. 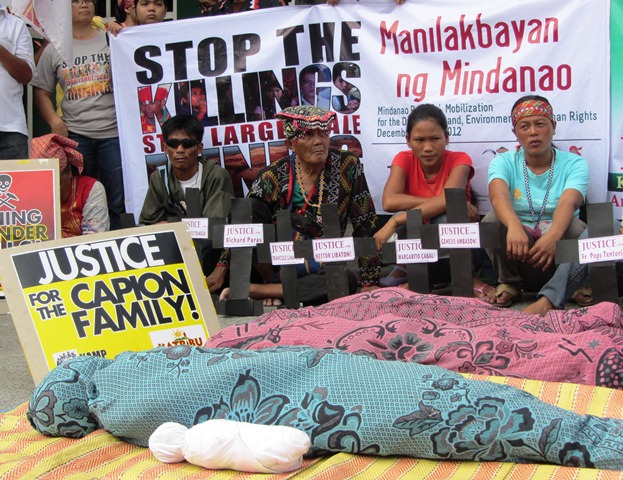 Mindanaoans bring in front of the DENR images of Filipinos killed by state forces to pave way for large-scale mining operations.(Photo by Marya Salamat / bulatlat.com)

In fact, the Aquino government has been steadily bringing about deaths and destruction to Mindanao on their way to rendering the island vulnerable to devastation by the likes of Sendong or Pablo. To pave the way for a liberalized mining policy and try to quell the growing resistance to it, Aquino has ordered massive military deployments to secure large-scale mining operations, the delegates of Manilakbayan ng Mindanao said in their various pickets in the capital.

Since the 10-day Lakbayan to Metro Manila of some Mindanao-based indigenous peoples and environment organizations arrived last Nov 30, they have called on Aquino to scrap his mining policy that allows large-scale mining operations, and comes packaged with massive military deployment and attendant human rights violations. They said that some 35 opponents of mining and “developmental aggression” from Mindanao have been murdered under Aquino. Meanwhile, under Aquino, too, 1,017 families or nearly 6,000 people in mining communities have been displaced by militarization.

In the New Bataan and Cateel towns of Compostela Valley where the latest typhoon-induced disaster is more deadly, prominent Mindanao environmentalist Francis Morales has long sounded the alarm “about the unabated mining explorations and operations” there. An example is the more than 2,000-hectare gold and copper mining project of the Canadian-owned Philco Mining in the hinterland village of Camanlangan in New Bataan town.

Morales has long warned that these mining operations would affect the integrity of various ecosystems in the area such as Mt. Kampalili-Tagub Range Complex, a known Key Biodiverity Area (KBA) and Andap and Caragan watershed areas that supply ample amount of water for residential and agricultural uses in Compostela Valley province.

He also said that despite these serious threats to the lives of the local residents, the people have not been able to voice out their opposition due to widespread military operations which, he said, protect big extractive industries. 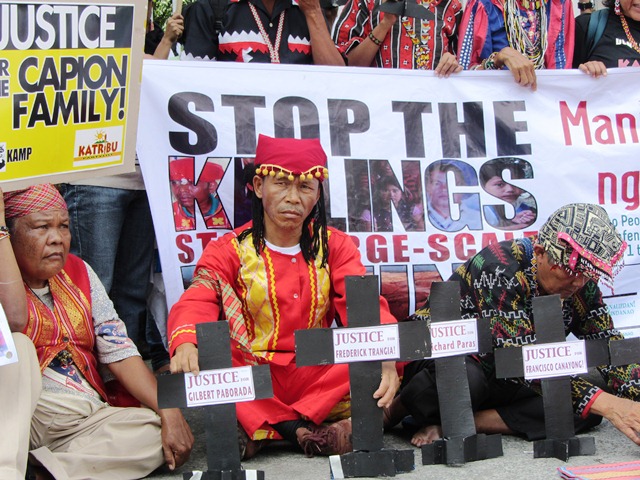 Environment and indigenous peoples group condemn the DENR for ‘colluding’ with mining TNCs to the detriment of the people and environment. (Photo by Marya Salamat / bulatlat.com)

“The ultimate objective of massive military deployments in New Bataan is to wipe out all types of people’s resistance against mining under the Investment Defense Force (IDF) and mining liberalization policy of the Aquino regime. Despite the community’s resistance, militarization has only resulted to displacement, intimidation and human rights abuses in New Bataan,” Morales said.

Sr. Matutina of Panalipdan asked: “Do we need typhoon Pablo to get the attention of the central government and concerned people about our issues like political killings and environmental destructions caused by big extractive industries and other agribusiness ventures? She said what we’re seeing now in Mindanao is “an environmental apocalypse not simply caused by nature’s wrath but by the Aquino government continuing puppetry to foreign mining interests and the government’s greed and corruption in general.”

“The heartbreaking disasters in the New Bataan and Cateel towns and elsewhere illustrate how Mindanao’s environment has reached its maximum limit, and unless this government adopts a mining policy which puts people’s safety over the insatiable thirst for profits of large-scale mining companies, we can only expect greater destruction in communities where there are big mining activities,” Matutina warned.

“Because units of the New People’s Army (NPA) in the affected areas work daily with the people, they are among the first to carry out rescue operations and assist the people in confronting the calamity,” the CPP said in a statement.

In the light of urgent humanitarian considerations, the revolutionary group said the NPA “can suspend offensive military operations against the AFP for a period of time. The responsible organs of the Communist Party, the NPA and the National Democratic Front of the Philippines (NDFP) will issue more authoritative and detailed orders on this matter.”

They urged all revolutionary forces to heed the clamor of the calamity victims for immediate relief. It called for “mobilization of resources and forces” to extend assistance to the victims of the calamity. The group also appealed to the international community “to course their assistance to the various people’s organizations directly engaged in calamity and disaster work to ensure that this reaches the people and is not diverted by corrupt officials.”

In the past, millions of money and donations were poured into the towns and provinces visited by disasters, but people there complained they hardly felt the released aid.

In the labor sector, the KMU revived its “Task Force Obrero,” a relief drive. They call on the public for various forms of support for the workers and people of Mindanao.

“The Aquino government continues to boast about its support to people in the affected areas in Mindanao,” Elmer Labog, KMU chairman, said. But from workers’ experience, he said “the government actually refuses to give significant support to Filipinos devastated by typhoons.”

In some instances, critics said the disasters were even pounced upon by the government for campaigning early, building up its candidates’ war chest, or imposing previously hard-to-implement measures such as demolition or displacement of communities.