You Are Here: Home → 2012 → July → 10 → ‘After all the antics, Aquino’s Mining EO blazes trail for further plunder of Philippine resources’ – environmentalists

‘After all the antics, Aquino’s Mining EO blazes trail for further plunder of Philippine resources’ – environmentalists

Almost a year in the making, the EO is being criticized for lacking in substance in terms of environmental protection and people’s welfare, focusing mainly in the paltry increase in government revenues.

MANILA – Progressive groups held a demonstration in front of Mines and Geosciences Bureau of the Department of Environment and Natural Resources (DENR) Monday, pelting its signage with rotten tomatoes as they took the government agency to task for “deliberately ignoring the demands of the people while actively promoting the large-scale plunder of the country’s resources.” It was the day Malacañang was due to divulge contents of its newly signed executive order on mining.

Grouped into Kalikasan People’s Network for the Environment, leaders of various organizations reiterated, at the gates of the DENR, their calls for a pro-people, pro-environment mining policy, as opposed to the mining liberalization framework of the current national mining law. They assailed the Aquino government’s EO for sticking to that same mining framework that they say had been rejected by the people.

Contrary to DENR claims that it had held public consultations, the executive order on mining signed recently by President Benigno “Noynoy” Aquino III was “drafted in secrecy,” Kabataan Partylist Raymond Palatino told Bulatlat.com at the sidelines of the Kalikasan-PNE protests. He explained that as early as March this year, Environment Secretary Ramon Jesus Paje had briefed them in Congress about the said EO. As early as that time, “we think that EO has already been compromised,” Palatino said, noting the intensive lobbying of mining industry groups and representatives. 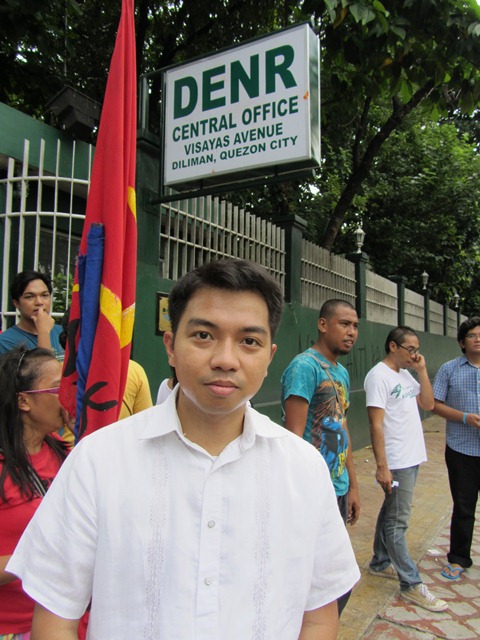 The effect of this lobbying, protesters have said before, showed in the Aquino government backtracking even on the limited aspect of mining in which it claims it is trying to change: revenue sharing.

No genuine and sincere consultation was ever made with the affected communities and environmental defenders, said Clemente Bautista, national coordinator of Kalikasan PNE. Kalikasan Partylist, in a statement, also decried the lack of transparency and thorough consultations over the EO.

“Only the Chamber of Mines seems to have been informed and consulted beforehand as to its contents. In fact, they seem to be the only ones looking forward to the release of this EO, while many important stakeholders – including mining-affected communities, local government units, environmental groups and indigenous peoples – are justly outraged at the lack of consultations and the short-sighted scope of the provisions released piecemeal,” said Frances Quimpo, secretary-general of Kalikasan Partylist.

Almost a year in the making, the EO was criticized for lacking in substance in terms of environmental protection and people’s welfare. According to Kalikasan PNE, it retains the mining provisions favoring foreign and large-scale mining companies.

The mining EO became necessary because of the public clamor for a change in mining policy. According to Kabataan Partylist Rep. Palatino, such is the backlash of the disastrous experiences and negative effects of mining that the people have already complained about it numerous times. But Aquino’s mining EO is not addressing that, he said, explaining that it focused narrowly on the economic value of mining. “The rest are just decorations and reiteration of the mining law’s provisions.” 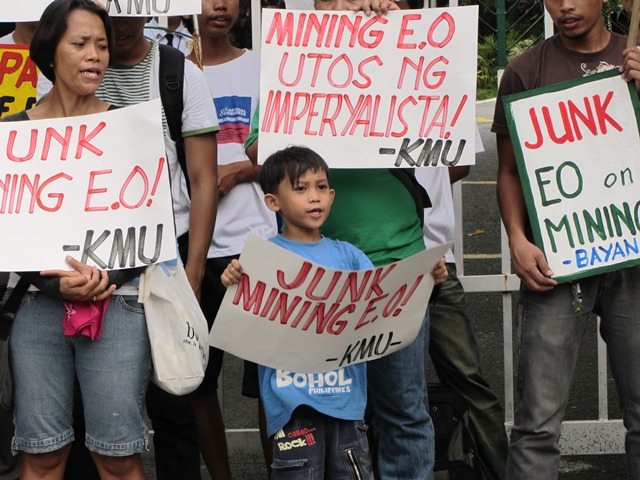 Worse, the EO’s narrow focus on revenue sharing seems too limited and precarious. And if that is not yet enough, the EO comes packaged with provisions which the mining industry stakeholders have been asking Aquino to give the go-signal to.

Aquino’s mining EO “contents itself with piecemeal increase in mining administrative fees instead of collecting our rightful shares from taxes and revenues,” Clemente Bautista of Kalikasan PNE said. This piecemeal increase will still be subject to legislation, according to multi-sectoral alliance Bayan (New Patriotic Alliance). “We can only expect the powerful lobby of the Chamber of Mines to go full swing to stop any legislation that will be detrimental to the profits of the big mining firms,” Renato Reyes Jr., secretary-general of Bayan said in a statement.

At least 40 local governments implementing various measures of regulations and bans on mining activity have previously opposed this part of Aquino’s EO since the proposal stage. These governors warned they can challenge this in court, but Malacañang has repeatedly boasted that the new EO will stand the test of the Constitution even if it is questioned before the Supreme Court. (This prompted the Kalikasan Partylist to urge the public to be vigilant over how the next Supreme Court chief justice will handle the issue of the mining EO, beginning with the Judicial Bar Council’s lining up of nominees for chief justice.)

The group Bayan said Aquino’s mining EO directs the DILG to ensure that local government units will act in accordance with national policies, including the Mining Act of 1995. Clemente of Kalikasan PNE added the EO does not just undermine the authority of local governments but also other national environmental laws.