MANILA – A growing number of local ordinances are coming out in the Philippines declaring their specific areas of jurisdiction as mining-free zones, and specifically banning open pit mining. “It can only mean that at the local level, people are rejecting mining,” said Rep. Teddy Brawner Baguilat from the lone district of Ifugao in a forum at the Catholic Bishops Conference of the Philippines (CBCP) in Intramuros, Manila early this week.

Indeed, from Cordillera in the North down to Palawan, Bicol and Negros in the Visayas and Caraga in Mindanao, communities and indigenous peoples have been banding together into anti-mining alliances, with some supported by the Church, and successfully convincing or pressuring their mayors, councilors, governors and representatives to ban the operation of destructive mining in their areas.

This, on top of the natural wealth and beauty of the Philippines, is a great piece of good news, said Sr. Stella Matutina of Panalipdan from Mindanao at the recent 3rd Peoples’ Mining Conference late last week. 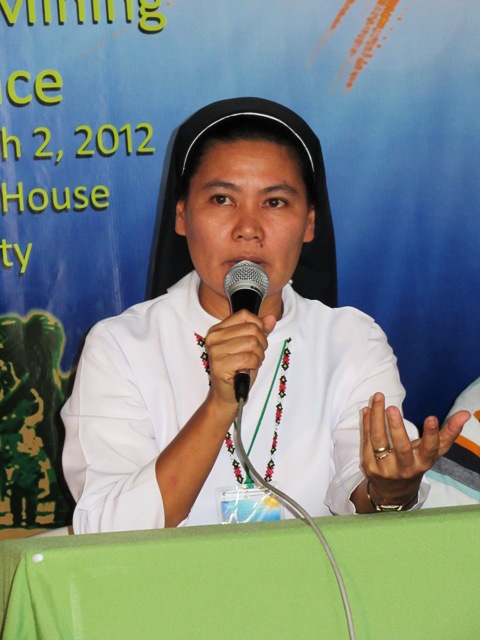 The bad news, she hastily added in Filipino, is that “massive destruction of our beautiful environment is happening because of greed for profits by a few.” That greed, based on reports of anti-mining activists in the same conference and elsewhere, is being nurtured and advanced by the Philippine Mining Act of 1995.

The Philippine Mining Act of 1995 is widely blamed for having opened wide the country’s mineral and non-mineral wealth to as much as 100-percent foreign exploitation. “This law has opened the floodgates to widespread plunder of our natural wealth, unprecedented environmental degradation and worsening human rights violations,” said Renato Reyes Jr., secretary-general of multi-sectoral alliance Bayan.

As such, many groups greeted the 17th year of Philippine Mining Act with protests and calls for its repeal. Even an impending executive order from Malacañang promising to address complaints about mining, but still hinged on the Mining Act of 1995, did not escape the fury of the protesters.

Last Saturday, on the 17th anniversary of the derided Mining Act, some 600 protesters from various regions, indigenous groups and various sectors criticized President Benigno “Noynoy” Aquino’s policy on mining as “subservient to foreign interests.” In Mendiola near Malacañang they burned an effigy of a foreign puppeteer controlling a marionette, which happens to be the Philippine president astride a backhoe.

Lip service, barefaced lies, or “greenwashing,” is how the leaders of local communities dislocated and disadvantaged by mining frequently describe the claims made by mining industry bigwigs and the Aquino government.

Bayan suspects that “From all indications, the Aquino government has acceded to the demands of the big foreign mining firms and is now merely concerned about making this acceptable to the opposition groups.

The Mining Act today faces unprecedented opposition from a broad cross-section of society, including inside and outside parliament, indigenous communities, schools, church groups, environmental groups and armed rebels in the countryside. There is a growing clamor to stop destructive large-scale foreign mining in so many provinces and regions nationwide, noted Bayan.

To counter these clamors, the government and the mining firms use billions of peso worth of “greenwashing or PR gimmicky” or multimedia lies, and “state-sponsored terrorism of military forces” in areas covered by mining, according to the Kalikasan-PNE.

Bautista of Kalikasan-PNE said that “at least 40 human rights violations since 2001, of which 37 are politically-motivated killings, two are frustrated murders and one is a case of enforced disappearance,” have been attributed to struggles against mining.

“The promise of ‘economic and social development’ by mining companies is just lip service. The lopsided mining policies have significantly contributed to the degradation of ‘host communities,’ which companies see only as repositories of minerals–not as homes to families and individuals,” said Kakai Tolentino, Dumagat Spokesperson of KATRIBU Partylist.

“When they destroy what’s underneath, where would they relocate those who live above it?” asked Sr. Stella Matutina. She shared how in some places in the Caraga region, for example, the people have to evacuate every six months due to the simultaneous entry of mining firms and the military. More than 42-percent of Caraga’s lands are covered by mining permits and applications, excluding areas approved for coal mining, said Sr. Stella.

In Rapu-rapu in Bicol, almost the entire island is targeted for mining, with some villages already leveled down by mining. As much as 70-percent of Cagayan Valley coastlines are being dredged or up for dredging for magnetite mining, said Santos Mero, member of the Ibaloi tribe and Cordillera Peoples’ Alliance. He said that almost the entire area of the Cordillera region is covered by mining permits or applications.

Yet, mining has contributed only slightly to the national economy. Based on a study on transparency issues in Philippine mining, it contributed only 0.91-percent to GDP from 2001-2009, and a mere 0.376-percent average share of total employment from 1990-2004.

Seventeen years of Mining Act have given a total of more than a million hectares of Philippine lands to foreign mining corporations’ control. The law gives each of them as vast as 81,000 hectares for a period of 25 to 50 years, with little in return except for a 2-percent excise tax. But critics said this is offset by other tax exemptions such as the eight to 10 years tax holidays.

Worse, the Bureau of Internal Revenue is probably collecting less excise tax than the actual collectible, observed Maita Gomez who researched on Philippine Mining Industry’s transparency issues. Gomez said the Philippines exported more minerals than the mining companies have reportedly produced, suggesting that they may have under-declared their production. “No wonder the mining firms are very happy operating here,” she said.

It is this glaring inequity in sharing that the Aquino government is reportedly seeking to address in a new mining Executive Order, only the Chamber of Mines is opposed to it. But even if Aquino was to have his way in carving out a slightly bigger share from the mining firms’ declared profits, that is just “a drop in the bucket compared to the billions of profits and worth of mined wealth carted out of the country each year,” said Gabriela Women’s Partylist Luzviminda Ilagan.

As it stands, mining is an extractive industry that does not develop the economy, said Bayan. They charged that the foreign mining firms and their local counterparts are apparently merely interested in exporting the country’s resources, which has grown at a rate of 27.96 percent from 2005-2010.

The Philippine Mining Act of 1995 is beyond saving or revision, according to the environment defenders. What is needed is mining moratorium, they said, and “this must stand until we are able to put in place a pro-people, pro-environment mining law,” said Clemente Bautista, national coordinator of an environmentalists’ coalition called Kalikasan PNE.

In Congress the progressive partylist bloc has a pending proposed bill seeking to allow mining only when an industrialization program calls for it, and if the affected community truly gave their consent.