You Are Here: Home → 2012 → December → 9 → Protestant church calls on Aquino to act on murder of tribe leader, stop the killings

Protestant church calls on Aquino to act on murder of tribe leader, stop the killings

MANILA – Taking the cudgels for the widow of slain anti-mining tribe leader in Bukidnon, bishops of the United Church of Christ of the Philippines (UCCP) wrote to President Benigno Aquino III seeking justice for Jimmy Liguyon.

Liguyon, a UCCP leader, was shot to death in front of his family on March 5 by Alde Salusad and his men, members of the New Indigenous People’s Army Reform (Nipar), in Dao village, San Fernando, Bukidnon. Nipar is a paramilitary group under the Philippine Army’s 8th Infantry Battalion.

In a gathering, December 8 at the UCCP office in Quezon City, Liguyon’s wife Sharon recounted how her husband was killed. Sharon said Salusad even declared that Liguyon was killed for opposing the entry of mining in their community. Nine months after, the suspect remains at large despite a standing warrant of arrest. 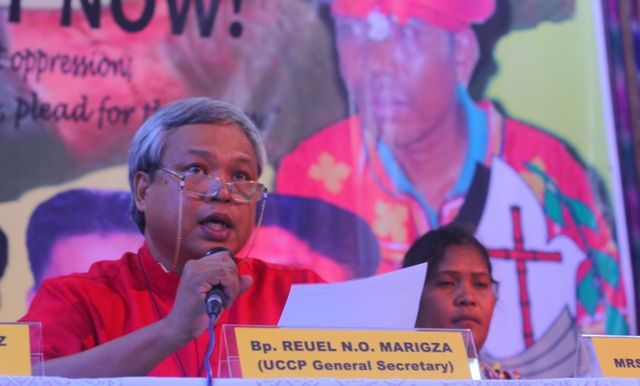 Bishop Reuel Marigza, general secretary of the United Church of Christ in the Philippines (UCCP), calls on the Aquino administration to arrest the primary suspect in the killing of anti-mining tribe leader Jimmy Liguyon. Beside him is Sharon Liguyon, widow of the slain activist. (Photo by Ronalyn V. Olea/ bulatlat.com)

“We, Bishops of the UCCP tasked with being Shepherds of the Flock, are deeply concerned for the safety and welfare of our church members and all the residents of Dao village, San Fernando, Bukidnon,” the letter dated December 7 read.

Sharon said that after the killing of Liguyon, residents of their community decided to evacuate for fear of Salusad and his men. They stayed at the Bukidnon Provincial Capitol in Malaybalay until August.

The UCCP said other tribe leaders were threatened by Benjamin Salusad, brother of Alde Salusad, leader of the Special CAFGU Active Auxiliary under the Army’s 8th Infantry Battalion (SCAA), that they would be next for refusing the entry of mining and logging operations in the gold-rich Dao village.

Speaking for their church, Marigza urged Aquino to act decisively to dismantle both the Nipar and SCAA paramilitaries “who continue to threaten, harass and kill the people of Dao village.” 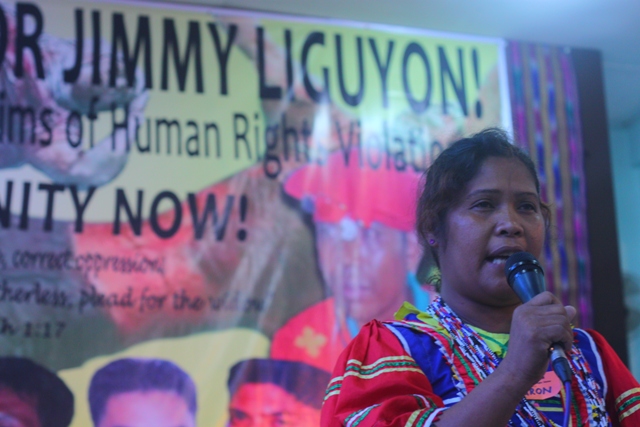 Sharon Liguyon, widow of slain anti-mining tribe leader Jimmy Liguyon, narrates how her husband was killed in front of her. (Photo by Ronalyn V. Olea/ bulatlat.com)

Bishop Melzar Labuntog of the UCCP Northwest Mindanao said they held dialogues with local government officials on the murder of Liguyon. “It is frustrating to be told that they cannot arrest Salusad.”

The UCCP bishops sought an audience with Justice Secretary Leila de Lima. They were met by Undersecretary Francisco Baraan III.

“Undersecretary Baraan assured us they would work for the attainment of justice,” Labuntog said. “We’ve been hearing that for the past nine months. We hope that something would really come out of the dialogue.”

Baraan ordered the National Bureau of Investigation (NBI) to assist the Philippine National Police (PNP) in arresting the suspect.

According to the Stop the Killings of Indigenous Peoples Network (SKIPNet), there have been 33 indigenous peoples killed under the Aquino administration, 24 of whom are from Mindanao.

The SKIPNet decried that not one of these cases “have been seriously looked into or processed by the justice system.”

“Are these victims, their families, their organizations and their tribes indispensable?” Piya Malayao, spokeswoman of Katipunan ng Katutubong Mamamayan ng Pilipinas (Kamp), said in behalf of SKIPNet.

The network called on the Aquino administration to hold accountable the perpetrators of extrajudicial killings of indigenous peoples and vowed to raise the issue at the international level.

Meanwhile, Norma Dollaga of Kasimbayan, said that under the Aquino administration, the operative meaning of injustice has been the Oplan Bayanihan, the counterinsurgency program of the current administration.

Dollaga said there is a storm greater than Pablo, the typhoon that recently hit many parts of Mindanao, leaving hundreds dead and missing. “It is injustice, exploitation, environment plunder and the inability of the government to hold those accountable,” she said.