You Are Here: Home → 2012 → December → 13 → Farmers march against militarization, terror in their communities

Farmers march against militarization, terror in their communities

“Before, we could work in our farms without fear. Life is difficult but we could still eat at least three times a day. We peacefully sleep at night. My children could still go to school. But everything changed when the soldiers arrived.”

MANILA – They traveled 176 kilometers from Lucena city, south of Luzon island, to Mendiola in Manila. Notwithstanding the scorching heat of the sun, close to a thousand people from the Southern Tagalog region marched their way to Mendiola to fight for their human rights. They carried banners calling for justice for victims of human rights violations and the pull out of military troops from the Bondoc Peninsula.

Vella Evangelista, 60, from Tanauan, Quezon, braved the long march despite her old age. Her son Ramon, 27, has been in hiding because of trumped up charges that were filed against him. “He’s just a farmer working for his family. Just because he is a member of the farmers’ organization, soldiers are accusing him of being an NPA member. He hasn’t done anything wrong,” Evangelista told Bulatlat.com.

The Lakbayan ng Mamamayan or the People’s March for Human Rights is held annually by the people of Southern Tagalog. The long march is led by the human rights group Karapatan-Southern Tagalog and was joined the by supporters, cause-oriented groups, church workers and the victims themselves.

Evangelista was one of the thousand marchers from Bondoc Peninsula in South Quezon. She said that their town is heavily militarized making life more difficult for them. “Before, we could work in our farm without feeling anxious. Now we have to be extra cautious because if soldiers see us they would interrogate us about NPAs and even accuse us of being one.” 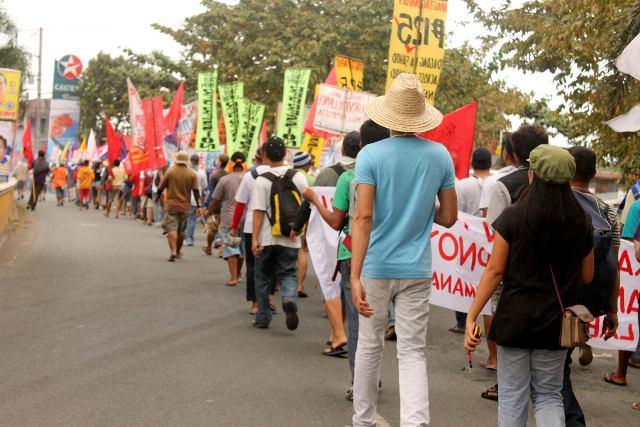 Farmers, workers and other sectors march from Lucena City to call for an end to human rights violations.(Photo by Southern Tagalog Exposure / bulatlat.com)

Glen Malabanan, secretary general of Karapatan-ST said President Benigno S. Aquino III’s peace and development program meant massive deployment of military troops in the region. She said families are forced to leave their houses because of military intimidation, making their already hard life more difficult. She added that at present, eight combat battalions of the Philippine Army are deployed in Bondoc Peninsula plus another six battalions of combined police and military forces.

The group has documented 216 victims of different forms of human rights violations in the area. Forty of them are women and 26 are children or minors while cases of threats and harassment already numbered to about 2,000. The use and encampment of security forces in homes and public places already affected at least 3,000 residents.

Malabanan said that under the Aquino administration, there are 20 victims of extrajudicial killings, three enforced disappearances, and 64 political prisoners have been recorded in the Southern Tagalog region.

Militarization has disrupted their normal lives. Evenagelista said, soldiers are harassing and intimidating farmers who are caught working in their farms, accusing them of being members of the NPA. Her son Nicasio, 29, was also subjected to harassment. He was accused of being an NPA. “But he is a farmer. The soldiers only found him carrying tingkalan, (a tool used for harvesting) they accused him of being an NPA. He was even interrogated in the camp.”

Mylene Zantua, 32, mother of five children could not go home because the military filed trumped up charges against her last Nov. 12. She is the current secretary of the Save Bondoc Peninsula Movement, a member of the Coco Levy Ibalik sa Amin (CLAIM) and Pinagkaisang Lakas ng mga Magsasaka (Piglas)-Quezon.

Because Zantua has been an active leader of farmers in San Francisco, Quezon, she was subjected to harassment and intimidation. She is being accused of being a recruiter for the New People’s Army. In one incident sometime in October, soldiers tried to arrest her and bring her to the camp. “Twelve soldiers tried to arrest me without a warrant of arrest. Their arms pointed at me. But there were many people in the barangay hall so they just detained me in my house.”

Soldiers have been terrorizing the residents of San Francisco, as well as in other villages where soldiers are deployed. Zantua said, “Soldiers raid houses, some of them even occupy houses for a month,” she told Bulatlat.com. Soldiers abuse girls who are minors, two of them even got pregnant.

The militarization of their area has a great impact on their livelihood too. “Before, we could work in our farms without fear. Life is difficult but we could still eat at least three times a day. We peacefully sleep at night. My children could still go to school. But everything changed when the soldiers arrived.”

On Nov. 10, Zantua said, soldiers went to their house looking for her. “My husband was not home and my children were the only ones left in our house. They were terrified.” Since the case was filed against her, soldiers go to their house every now and then. Out of fear, the rest of her family left San Francisco and went to Manila.

Her family joined the 800 people from Southern Tagalog who marched to Manila not only to commemorate international human rights day but also to call on the government to pull out the military troops in Bondoc Peninsula.

Evangelista also pleaded for help for his son’s case. The military charged him of murder. “He did not kill anyone. He is only working for his family’s upkeep.” And because Ramon has been in hiding since January of 2011, his family has been suffering too. Evangelista said Ramon’s five children are suffering from hunger while his wife often get sick because of too much work. However, they never earn enough for the needs of their family.

“I give them food or money if we have some because they have no one to turn too,” Evangelista told Bulatlat.com.

She also recounted an incident where they saw a soldier aiming a gun at them one noontime while she and her husband were eating lunch. “When I looked at my back I saw a soldier already pointing a gun at us. We offered them our lunch to pacify the soldier.”

These violations of their rights, gave her more reasons to join Lakbayan. She does not belong to any organization. But because her two sons lives and also hers are in danger, she finds it right to go to the streets and call on the government to respect their human rights.

Zantua and Evangelista shared the same sentiment. Zantua’s children are forced to temporarily stop their studies because of militarization. Erica Mae, 12, Zantua’s eldest said she is sad that they had to leave their place.

Even if life in Manila is more difficult, Zantua finds it safer in Manila. “It is difficult. We have no means of livelihood here. We have no house. My youngest child had a diarrhea recently because we just use tap water for his milk.”

Speaking in the rally, Zantua said Aquino has no respect for human rights. “If he respects human rights, why did he deploy battalions of soldiers in Bondoc Peninsula?” She called on the administration of Aquino to pull out the military from Bondoc Peninsula.

Meanwhile, Malabanan said that despite the attacks on their rights, they would still continue the struggle for justice. “Arroyo’s Oplan Bantay Laya I and II failed. We will once again call for a stop to Aquino’s Oplan Bayanihan,” Malabanan said in commemoration of international human rights in Mendiola on Dec. 10, Monday.

She added that despite the massive violations of their rights, they were still able to join the march to Mendiola. “Even if many of our members are being illegally arrested, disappeared and killed, we will not be cowed; we will stand for our rights.”