“It clearly shows the brazenness of the military. They were ready to do anything to sabotage our caravan.” – Save Bondoc Peninsula Movement

MANILA – They came to bring peace but they were met with hostility by men in uniform.

The Save Bondoc Peninsula Movement, a network of people’s organizations, Church-based groups and local government units, decried what they called as “sabotage” operations of the military against the ongoing mercy mission and peace caravan in Quezon province, south of Manila.

Deployed in South Quezon are 4,000 troops from eight battalions of the Armed Forces of the Philippines (AFP).

At around 2:30 p.m. of June 26, the 17-vehicle caravan was halted after three of jeepneys had flat tires. Metal spikes were scattered on the road at Malaahos village, Catanauan, about a hundred meters away from the Army’s 76th Infantry Battalion camp. 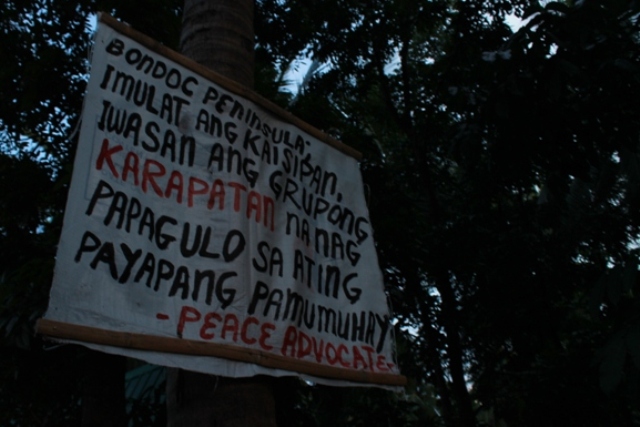 Smear campaign posters and streamers against Karapatan, one of the conveners of the Save Bondoc Peninsula Movement, were also conspicuously posted in public places in the towns of Bondoc Peninsula. The materials maliciously link the volunteers and participants of the relief and medical mission to the New People’s Army (NPA), armed wing of the Communist Party of the Philippines (CPP).

“It clearly shows the brazenness of the military. They were ready to do anything to sabotage our caravan. It is a good thing that no untoward accident resulted from their foul play,” Orly Marcellana, spokesman of the Save Bondoc Peninsula Movement said in a statement.

Upon arriving at Talisay village in San Andres town, the mission chanced upon a meeting facilitated by the military.

Marcellana said they saw 14 soldiers in full battle gear. “They were showing a film depicting our organizations as CPP fronts. They told the residents the NPAs would come to provide food and medical services.” 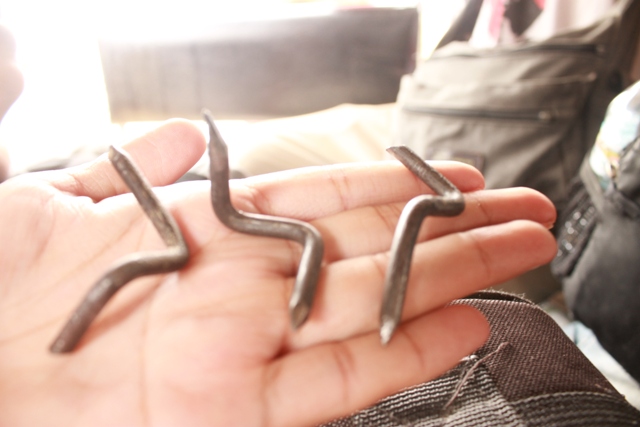 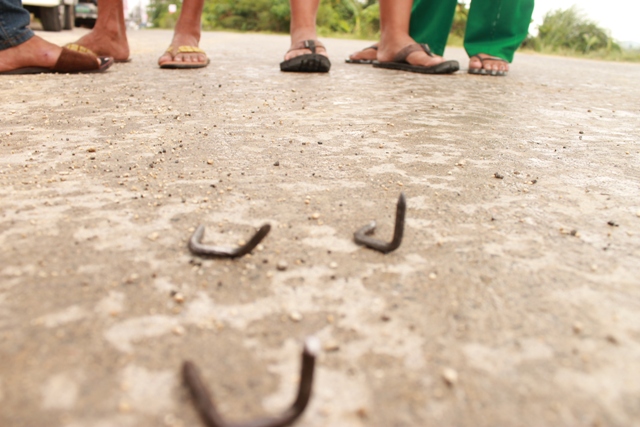 Metal spikes scattered on the road at Malaahos village, Catanauan, about a hundred meters away from the Army’s 76th Infantry Battalion camp.(Photo courtesy of Save Bondoc Peninsula Movement / bulatlat.com)

This morning, elements of the Army’s 74th Infantry Battalion were reported to have been threatening the residents, saying they would wage a war against anyone who would participate in the mercy mission.

On June 25, Karapatan members in Quezon reported that about 15 soldiers belonging to the 85th Infantry Battalion of the Philippine Army barged into the house of Mylene Santua at Pagsangahan village in San Francisco town. The soldiers interrogated Santua about the mercy mission and peace caravan.

A certain Corporal Casiano warned Santua not to join the activity led by the Save Bondoc Peninsula Movement or else she would be facing trouble. 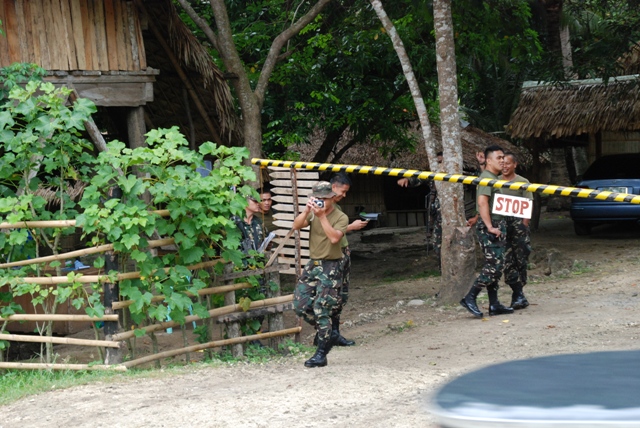 Soldiers of the 74th Infantry Battalion take photos of the mercy mission (Photo courtesy of Save Bondoc Peninsula Movement/ bulatlat.com)

“This is the Oplan Bayanihan of the Aquino administration. Contrary to the essence and meaning of ‘Bayanihan,’ the counterinsurgency program of the government is both divisive and deceptive. All the smear campaign and red-baiting propaganda by the soldiers shows that they fear that the actual anti-people effects of Oplan Bayanihan will be exposed,” Marcellana said.

The group, composed of 300 participants, is set to stay in San Andres town until tomorrow, June 28. Afterwards, the caravan will proceed to the town of Lopez for the second phase of the caravan. 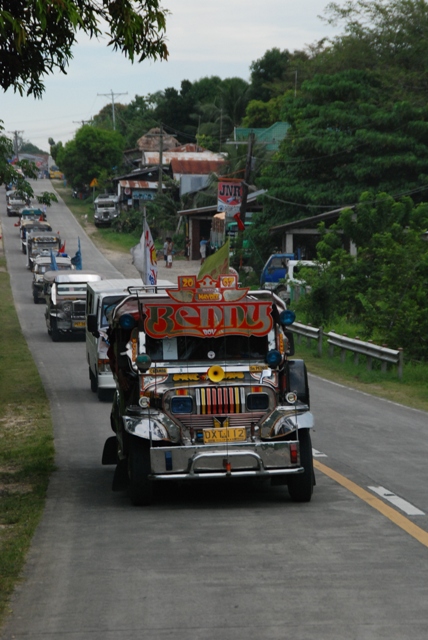 In a separate statement, Anakpawis Rep. Rafael Mariano joined the call for the immediate pullout of soldiers in Quezon.

“South Quezon and Bondoc Peninsula are now fast becoming virtual ‘war zones.’ Hundreds of poor farmers and their families are forced to evacuate their homes and seek shelter elsewhere due to intense military operations and deployment of military forces in 22 towns and 50 villages throughout the province,” Mariano said.

Since January 2011, Karapatan-Southern Tagalog documented 128 victims of human rights violations including one case of enforced disappearance, four cases of torture, 15 cases of illegal arrest and detention, 17 cases of threat and intimidation, among others.

Mariano said “the administration’s alarming human rights record will be a major issue” to be raised by the people on Aquino’s third State of the Nation Address (SONA) next month.