“From the evidence that we have gathered from the hearing and also from the documents we were able to get, I believe that he [Brig. Gen. Eduardo Año] has a direct hand in the abduction of my son.”

MANILA – The promotion of Brig. Gen. Eduardo Año, who is implicated in the abduction of activist Jonas Burgos, and his appointment as the new chief of the Intelligence Services of the Armed Forces of the Philippines (Isafp) has been deferred by the Commission on Appointments.

“I am speechless. I am asking for more prayers that in this small way, a little light of hope will come through,” Mrs. Edita Burgos, mother of Jonas, told Bulatlat.com.

On Dec. 3, Año was sworn in by President Benigno S. Aquino III as the new chief of the ISAFP. AFP spokesperson Col. Arnulfo Burgos, said in a text message to GMA News, that Año’s promotion “was deliberated on by the Board of Generals and endorsed by the Secretary of the Department of National Defense and was duly approved by the president and commander-in-chief of the AFP.”

Año, Burgos added, has responded to the allegation against him before the Department of Justice. He claimed that consistent with the counterinsurgency program Oplan Bayanihan, they adhere to the “protection and promotion of Human Rights in all its undertakings.”

But Mrs. Burgos, who has been searching for her son for five years now, said in her affidavit that she raised her objection to Año’s promotion as soon as she heard it in media reports. Mrs. Burgos said Año does not deserve to be a general in the Army.

“He has violated the human rights of my son, his right to liberty (or God forbid his right to life). Col. Año stands accused of the crime committed against Jonas in a case under preliminary investigation by the Department of Justice,” Mrs. Burgos’ affidavit read. 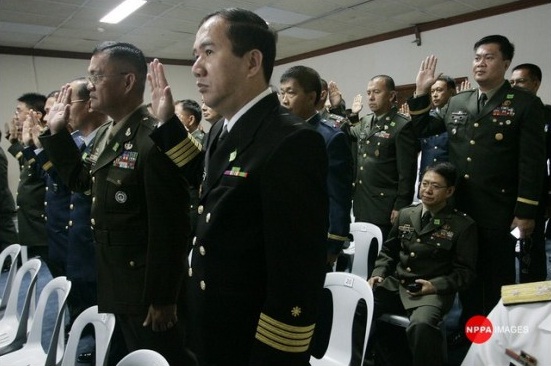 Minutes before the swearing in of the military officials, Sen. Joker Arroyo read a letter from Sen. Sergio Osmeña III, through his chief of staff, asking to defer the promotion of Año to another date. He said he wanted to question Año regarding the opposition raised by Mrs. Burgos. Senator Arroyo, for his part, adopted his colleague’s request as his own.

All 50 military officials stood up and were sworn in before the Commission on Appointments, except for Año.

In an interview with Interaksyon.com, Año said he is “okay” and refused to comment further on the charges against him and other military officials before the Department of Justice. He added that it is already pending.

Año, in his reply to the opposition of Mrs. Burgos, denied his involvement in the abduction of Jonas. He said his name was never a respondent to the Supreme Court resolution on July 5, 2011. He added that it is “quite surprising that after all the investigations, respectable judicial bodies such as the Supreme Court, Court of Appeals, and the CHR for four years since 2007 to 2011, nowhere was my name cited as respondent, but now I am suddenly being dragged and included in her complaint before the DOJ.”

He said that under his tenure he “had not come across any person by the name of Jonas Burgos.”

Mrs. Burgos, speaking before the media, said she opposed the confirmation of Año. “From the evidence that we have gathered from the hearing and also from the documents we were able to get, I believe that he has a direct hand in the abduction of my son.”