MANILA –When the Aquino administration took over the reins of government, the public health system was festering and the poor’s access to essential health services has been getting worse.

Due to poverty, six out of 10 people die without being able to see a doctor.

Propelled to power on the campaign promise of change, the Aquino government embarked on two major programs supposedly to rescue the ailing public health system and the poor majority from the throes of death: corporatization and public-private partnerships, and universal PhilHealth coverage.

To pave the way for public-private-partnerships, Congress tried to fast track House Bill 6069 , which mandates the corporatization of potentially viable government hospitals. House Bill 6069 or An Act Creating National Government Hospitals Corporations was approved at the committee level. A similar legislative measure is also pending at the Senate.

This was met with stiff opposition from concerned health workers and professionals, patients, poor communities and different cause-oriented groups who bonded together under the Network Opposed to Privatization (NOP). The group conducted lunch break pickets and nationally coordinated protest actions. The corporatization of hospitals, they said, would result in the privatization of government health services. 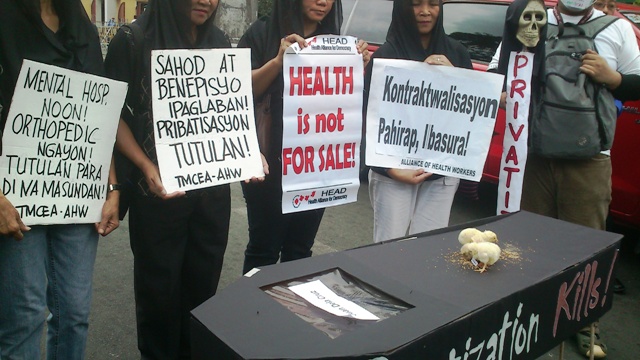 Mothers mourn for the death of health services in the Philippines. In a protest action in November last year, these mothers and the makeshift coffin depicts privatization of public hospitals as death for poor families. (Photo by Anne Marxze D. Umil/ bulatlat.com)

Valte was quoted saying in the report that, “There are proposals to incorporate government hospitals, not to privatize them. That will allow the hospitals to be run more efficiently.”

Secretary Ona has been trying to explain to the public that government hospitals would not be privatized. In an article, Ona said the DOH “is bringing certain private practices to improve efficiency and availability of public services that otherwise will take a long time or, maybe, we will not have that kind of resources at all.”

Under the corporatization scheme, the budget for government hospitals have been slashed and the respective Board of Directors of these hospitals would be given the leeway to implement measures to raise the funds for their operations, such as charging higher fees, and generate the resources for the hospital’s modernization through entering into partnerships with private corporations.

Already the budget for operations of the hospitals targeted for corporatization and public-private partnerships, such as the Philippine Orthopedic Center (POC) and the Research Institute for Tropical Medicine (RITM),have been slashed and no allocations for capital outlay have been given.

Forced to make do with the limited budget, in the meantime, and to demonstrate its financial viability to potential private investors, these hospitals have progressively increased its service or user fees.

These increases are just immediate measures to keep these hospitals afloat, given the reduction in government subsidies. Once private investors come in, fees would considerably increase further to ensure that they would profit from their investments.

A public-private partnership project is already in the pipeline for the RITM. According to Ibon Foundation, the RITM is about to enter into partnerships with private corporations for the local production of Pentavalent vaccine for diphtheria, pertusis, tetanus, hepatitis B and Haemophilus influenza B. The P453-million ($10.8 million) project will involve the partial localization of vaccine production from bulk preparation to the finished vaccine. Ibon said the project aims to reduce the overall vaccine procurement costs and ensure vaccine self-sufficiency. But when this is finally completed, these vaccines would surely be sold at a profit to enable the private investors to gain from its investment.

The POC, on the other hand, is up for bidding. The National Economic and Development Authority (NEDA) has approved the P5.6 billion ($135 million) rehabilitation project of the Orthopedic Center. According to the PPP Projects website, the project involves the construction of a 700-bed capacity “super-specialty tertiary orthopedic hospital” to be located within the National Kidney and Transplant Institute (NKTI) compound located along East Ave. in Quezon City. The government aims to transform the Orthopedic Center into the “country’s primary center for bone and joints diseases that is at par with global standards.” The PPP website further said, “With the project, the government would be able to provide better health care services to the public and provide access to more modern medical facilities and efficient hospital operations.” Once this is completed, the current increased fees would surely be a mere fraction of the fees that the envisioned modern Orthopedic Center would be charging.

The RITM and POC are among the eight PPP projects that the government targets to roll out in the near future. According to the PPP website, the RITM is in the process of securing government approval as of Dec. 12, 2012 while an invitation to bid was issued for the POC last Nov. 18, 2012.

Added to this, these envisioned corporatized, modern hospitals would also be involved in research and development. “The government has never invested in research and development, now it is even at the forefront of advocating that the private sector takes over this very crucial function,” said the NOP. What is wrong with this? The NOP believes that knowledge that is supposed to be generated for the good of society, such as technological breakthroughs in disease prevention and cure, would be “owned” and used for generating profits by private corporations, especially with the strict international patent laws.