The costs of the Aquino government’s K to 12 program

MANILA – Being touted as the main education reform program of the Aquino government, the K to 12 program is already in its second phase of implementation. How did it impact on the country’s deteriorating public school system?

Last June 2012, the Department of Education implemented the first phase of the K to 12 program to grades one and seven or first year high school. Before the school opening, news reports reveal the lack of preparation for the program’s implementation in terms of teachers’ training and lack of teaching guides, classrooms and chairs. Now, the school year is on its third semester, and yet, a grade one teacher told Bulatlat.com, essential materials such as teaching guides and worksheets are still lacking.

Digna Balderama, 45, grade one teacher in San Francisco Elementary School in Quezon City said the implementation of K to 12 program has been a burden for teachers. Miss Jane (not her real name) another grade one teacher from an elementary school in District 6 also in Quezon City said the K to 12 curriculum made teaching more difficult. This teacher requested Bulatlat.com not to identify her and the school where she is teaching because of fear of being reprimanded by her principal.

The K to 12 program was implemented without an enabling law by Congress. It was only on Oct. 2012 when House Bill 6643 or The Enhanced Basic Education Act of 2012, a law that institutionalizes the 12-year basic education system, including the mandatory kindergarten for five-year old children, was approved on third reading. The proposed bill was then sponsored in the Senate. But prior to that, the universal kindergarten was already implemented in school year 2010-2011.

The K to 12 program is the flagship program of President Benigno Aquino III. It is designed to increase the number of years of basic education from 10 to 12. 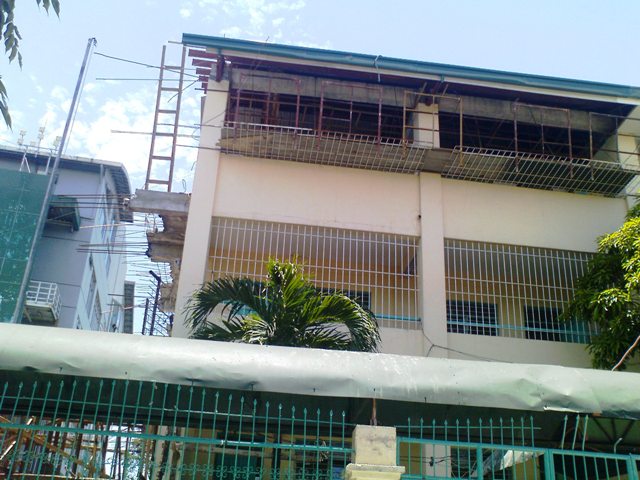 To fill in the big gap on classrooms, the Department of Education has started Public-Private Partnership projects last year. The government targets to close the gap in classrooms nationwide by 2013. (Photo by Anne Marxze D. Umil / bulatlat.com)

Despite strong opposition from progressive groups, the K to 12 program was still implemented. It worsened the shortages in the public school system: lack of books, chairs, classrooms and facilities, and teachers. Classrooms were divided in half to accommodate the big number of enrollees. Teachers have to stretch working hours to mitigate the shortages. Some students were forced to transfer to the home schooling program to decongest classes.

“Our situation is already difficult. The implementation of K to 12 made our lives even more difficult,” Miss Jane said. She said because there are no regular teachers for Kindergarten, grade one teachers are forced to teach Kindergarten classes. She said teachers are overworked, some are already getting sick and some have opted to resign. Out of frustration, Miss Jane once told her principal, “I would rather be a domestic helper than a teacher to lessen my problems.”

Miss Jane said when the school opened in June last year, 18 sections of kindergarten classes were opened for enrollment. Because there is only one permanent kindergarten teacher, they, grade one teachers, had to take on the load. She said they are being paid P3,000 ($73) for the extra load. Their teaching hours were thus increased from six to eight hours a day. This does not yet include the time they have to spend for preparations. “It is really exhausting. My time for my family is also suffering – I could no longer tutor my own child because of time constraints. There are also other chores that I still have to do at home.”

To mitigate the shortage, the DepEd hired voluntary teachers. Some have not yet passed the Licensure Exams for Teachers (LET) and some are licensed teachers who are left with no choice but to grab the job. Because they are either considered as volunteer-teachers or are contractuals, they are underpaid. ACT Teachers Party Rep. Antonio Tinio criticized this as a violation of RA No 7836 or the “Philippine Teachers Professionalization Act of 1994.” Section 27 of the said law provides that: “No person shall practice or offer to practice the teaching profession in the Philippines or be appointed as teacher to any position calling for a teaching position without having previously obtained a valid certificate of registration and a valid professional license from the Commission.” The P3,000 honorarium is even inhumane, Tinio said.

Miss Jane also said in their school, there are no new books being distributed to grade one pupils. She said they had to make do with the old books and from there get activities that are applicable for grade one pupils. Worksheets for students also came late; the said materials were only distributed to them last August 2012. “The worksheets came late. We had already taken up the topic when it came,” she said. She added that the pages of the worksheets are so thin, it gets easily torn. Worksheets for the third semester have not yet been distributed.

Balderama, on the other hand, said the quality of the books distributed to them is very poor: there are many errors in grammar and the production was obviously was done in a rush just to show that there are books for the K to 12 implementation.

“We have to get the children’s attention because now they want to see moving objects. Because of that we have to be more creative in the way we teach so that they would still have interest to go to school and learn.” She said their supervisor wants them to have different stamps to motivate the pupils; however, they were not given the funds to buy the different stamps and different colors of ink. The money would still have to come from them.

This is made even more difficult since they cannot collect, even a single centavo from the parents to augment their teaching materials. A DepEd memo was released regarding the prohibitions in the collection of fees in public schools. 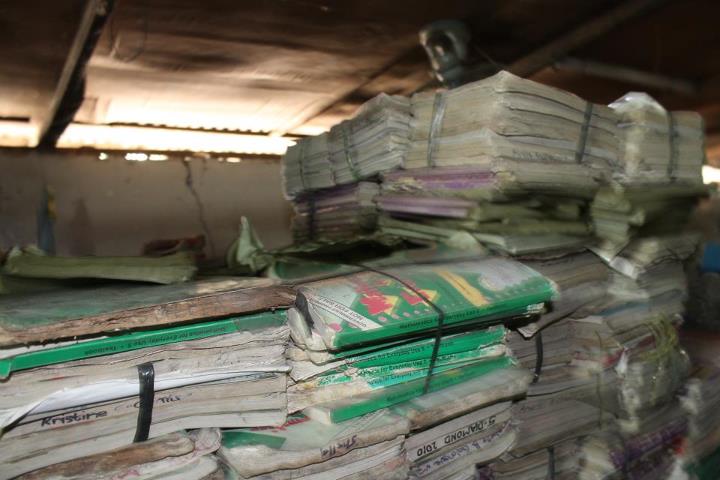 When the DepEd started to implement K to 12 program, there are no books provided for grades one and seven.(Photo courtesy of Alliance of Concerned Teachers / bulatlat.com)

And now that the enabling law for the K to 12 program has been passed in the third and final reading, she hopes that when the law would be finally enacted, there would be a corresponding budget.

Lack of training is also one of the concerns of teachers. Last year, teachers underwent training for one month, some even only for a week before the school year began.

Miss Jane said she teaches 10 subjects namely, Filipino, Mother Tongue language, MAPEH (Music, Arts, PE and Health), Math, Values, Araling Panlipunan (History) and English. She said that since the curriculum has changed, they had to teach the entire subjects in Filipino, except for the English subject.

“It is bewildering to change the way we used to teach. For how many years, we have been teaching Math using the English language, now, without prior preparation we have to teach it in Filipino?” Miss Jane said adding that they have difficulties translating terms such as fractions.

She has been teaching for 11 years. She observed that children are more confused. She said that it is confusing for children to learn Math in Filipino because in Kinder, Math is being taught in English. “They are used to count in English, one, two, three. And then when they get to grade one, it’s in Filipino. They are only getting confused and learning is made more complicated.”

While there are on-going trainings for teachers, Miss Jane said, the trainings are being held all at the same time and all trainings are important. There are also trainings where they have to pay like the training in the grading system, where the fee is P300 ($7.31). However, Miss Jane was not able to attend that training because she could no longer be accommodated. “The venue for the training was too small to accommodate the teachers. They eventually returned our money.”

The only solution of the government to fill in the shortages in the country’s education system is through Public-Private Partnership projects. According to the PPP website, the PPP for school infrastructure project (PSIP) seeks to supplement the current initiatives and program of the DepEd on classroom construction nationwide. “The objective of the government is to expand the supply of classrooms in all public school systems as fast as it could reasonably be done and cut the current shortage of around 66,800 classroom units nationwide.”

First phase of the PSIP was implemented last year.

The project was awarded to consortiums of Citicore Holdings Investment, Inc.-Megawide Construction Corp., Inc. and BF Corp.-Riverbanks Development Corporation last Dec. 12, 2012. The project would involve the design, financing and construction of about 9,300 one-storey and two-storey classrooms, including furniture and fixtures, in various sites in Region I, III and IV-A. 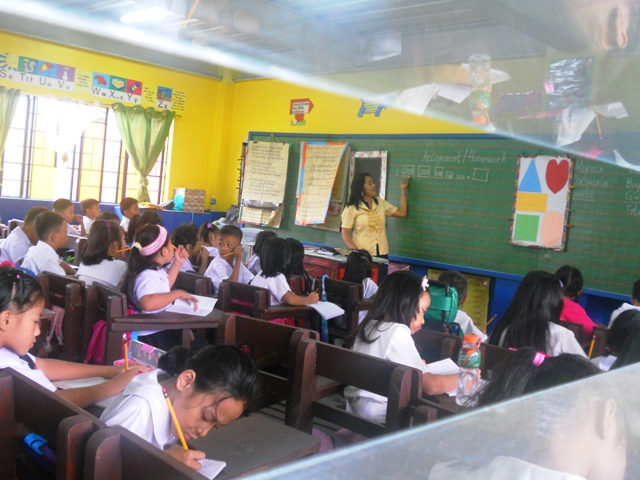 The PSIP is now on its second phase where 10,680 classrooms are targeted to be constructed, including school furniture and comfort rooms – in 14 regions nationwide. The government targets to close the gap in classrooms nationwide by 2013.

But at what cost?

Tinio warned against the higher cost of constructing classrooms through PPPs.

Tinio cited a study produced by the Canadian Union of Public Employees, which revealed that “for every two schools financed through P3s in Alberta (Canada), an additional school could be built for the same cost, if all were built using traditional public sector contracting models.”

According France Castro, secretary general of the Alliance of Concerned Teachers (ACT) and second nominee of ACT Teachers’ Party, more PPP projects are to be implemented by the government especially that public high schools are ill-equipped to accommodate grades 11 and 12 or senior high school. In senior high school, students will choose from the special courses: business and entrepreneurship, humanities and social science, science, technology and engineering, sports, and technical and vocational.

Castro said there will be an estimated 2.3 million senior high school students when the K to 12 program will be fully implemented by school year 2016-2017. The public school system has no capacity to accommodate the students and thus, a lot of students will have to enroll in private schools.

In this situation, Castro said, the government itself has resolved the possible bankruptcy of private colleges and universities.

Already the Philippine Association of Colleges and Universities (PACU) is warning about the losses being incurred by private schools due to declining enrollment rates. “ The financial losses from the enrolment drop could be in the billions of pesos if countermeasures are not put in place before 2016.” The Council of Private Educational Associations (Cocopea), estimates that financial losses of private schools would cost around P128 billion ($3.128 billion).

It could thus be concluded, Castro said, that under the K to 12 program, education is for sale and not for free. “This contradicts the Constitution, which provides that basic education, including high school, should be free,” Castro said.