Church to DILG: Effect arrest of suspect in murder of tribe leader

MANILA – Determined to seek justice for slain tribe leader Jimmy Liguyon, bishops of the United Church of Christ in the Philippines (UCCP) took to task the Department of Interior and Local Government (DILG) to effect the arrest of the primary suspect.

Liguyon, a vocal anti-mining leader and a local UCCCP leader, was gunned down inside his home in Purok 2, Barangay Dao, San Fernando, Bukidnon on March 5, 2012.

In a dialogue with Undersecretary Rafael Santos, January 16, UCCP general secretary Bishop Reuel Marigza said that despite a standing warrant of arrest issued in April 2012 against Alde Salusad, the main suspect, remains at large.

Bishop Melzar Labuntog of the Northwest Mindanao Jurisdictional Area told Santos that no less than the Philippine National Police (PNP) chief of San Fernando, Bukidnon admitted they could not arrest Salusad. 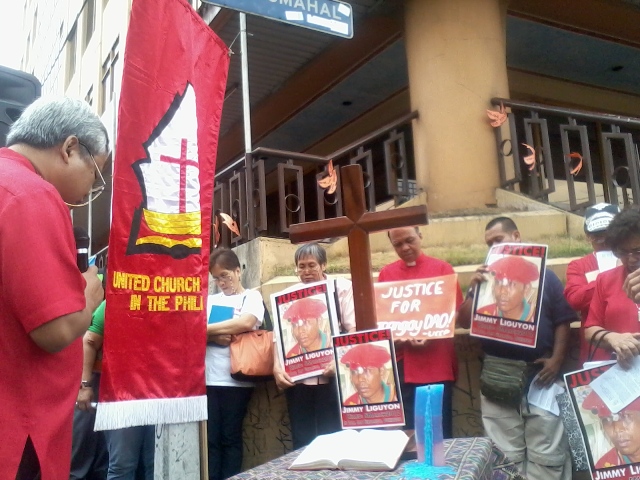 Bishops and lay workers of the United Church of Christ of the Philippines (UCCP) hold a picket outside the office of the Department of Interior and Local Government (DILG), Jan. 16, calling for justice for Jimmy Liguyon(Photo by Ronalyn V. Olea/ bulatlat.com)

In response, Santos said in Filipino: “We will have to look into the matter. We do not know yet the bottom of this case.”

Santos said that while the warrant must be served, he does not want unnecessary risks to lives.

Bishop Modesto Villasanta said: “They [Saludad and his men] are armed; [they are] linked with the Army.” Villasanta added that Salusad managed to threaten to kill all UCCP members in a radio interview.

Santos said: “You should have gone to the AFP [Armed Forces of the Philippines], DND [Department of National Defense].”

To this, Bishop Roel Mendoza said: “This is a police matter,” referring to the serving of the warrant. “The PNP is under the DILG.”

Mendoza said the UCCP is exhausting all possibilities to attain justice for Liguyon.

In December, the UCCP bishops also sought a dialogue with the Department of Justice (DOJ).

Liguyon’s wife, Sharon, and their children witnessed the incident.

“Until now, nothing has come out of that dialogue,” Asi lamented.

Santos said: “Until now, we are still looking for Gen. Palparan.” Retired Gen. Jovito Palparan Jr. is one of the main suspects in the kidnapping and illegal detention of University of the Philippines (UP) students Karen Empeno and Sherlyn Cadapan.

“We have raised the bounty for fugitives but still, they have not yet been arrested,” Santos said. “Others think we are no longer effective. It’s difficult to answer. It’s really frustrating.”

Santos promised to respond within one week. He said he needs to get information from the local police before he can decide what the best solution is.

“We feel your grief,” Santos told the bishops. “We would not ignore this case.”
Marigza said they would hold the DILG to their promise. “We are committed to pursue justice for Jimmy Liguyon.”