MANILA –Poet-songwriter Ericson Acosta is happy to be out of the Calbayog sub-provincial jail in Samar where he had been detained for 23 months on trumped-up criminal charges. His freedom is temporary, though. And Acosta is aware his battle still has a long way to go.

The court granted him temporary freedom on humanitarian grounds. He was flown to Manila on January 18 and brought to the National Kidney Transplant Institute (NKTI) for treatment of a kidney ailment.

On January 22, Acosta, 40, waited in his hospital room for the personnel from the Bureau of Jail Management and Penology (BJMP). The lone jail officer who flew with him to Manila would return to Samar and take custody of Acosta.

A day before, Col. Joseph Vela of BJMPwith ten armed personnel went to see Acosta. “The colonel said they would handcuff me as part of their SOP [standard operating procedures.]”

“I told him [Vela], ‘I have been released on humanitarian grounds and then you would treat me like that,’” Acosta said. “And then he said: ‘Nakakatayo ka naman.’ (You can still stand up.)”

Acosta was having light conversations with award-winning director BibethOrteza and University of the Philippines sociology professor Sarah Raymundo when the jail officers arrived.

Vela told Acosta he would no longer be handcuffed.

“I asked my superiors if we could forego using handcuffs, which is part of our rules. I just appealed to them not to handcuff you,” Velatold Acosta in Filipino.

Before going to NKTI, Vela’s superiors talked to him. 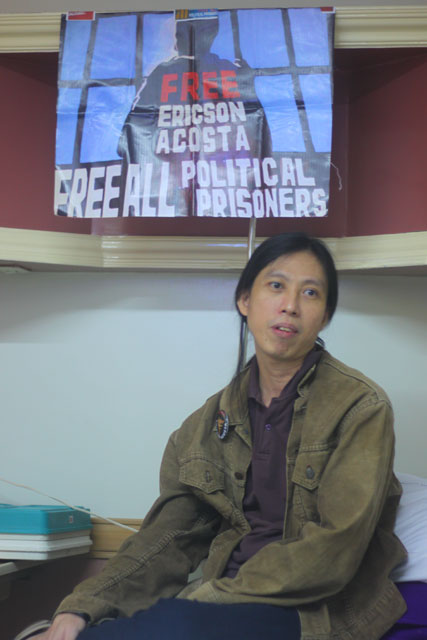 The jail officer added, however, that Acosta is not allowed to use computers.

“My visitors are the ones using computers,” Acosta said in Filipino. “I have forgotten how to use a laptop; I had been in jail for almost two years.”

The jail officer said the belongings of all the visitors would be inspected.

Vela said two BJMP personnel would be stationed outside Acosta’s room and two more at the ground floor of the NKTI.

Acosta told Bulatlat.com he believes the BJMP’s decision is “a result of pressure exerted by his supporters.”

Acosta’s visitors and friends earlier deplored as “overkill security measures” the plan to handcuff Acosta and to ban the use of cellphones and computers.

“Ericson was temporarily released on humanitarian grounds. He stayed here for four days with only one security escort and there have been no problems with him entertaining dozens of visitors and supporters every day. He is not a criminal. The last thing he needs is an overkill of security arrangements,” said UP Art Studies Prof. Roselle Pineda who was visiting Acosta when armed BJMP personnel first came to the hospital.

In a statement, the NUPL branded the aborted security measures as “a brazen overkill not warranted by the situation and his [Acosta’s] condition.”

“It is cruel, it is degrading, and it is inhuman,” NUPL secretary general Edre Olalia said.

“Again, it is another clear and shameless proof that the poor and the powerless are treated differently from the rich and influential like GMA, Abalos, Morato and many others who have exploited their arguably contrived medical conditions to whoop it up while facing far greater, serious and well-grounded charges versus the people including activists like Acosta,” Olalia said.

Acosta has asked for a dialogue with Justice Secretary Leila de Lima for the immediate resolution of his case.

More than a year ago, Acosta filed a petition for review before the Department of Justice (DOJ), citing serious irregularities and human rights violations in the conduct of his arrest and detention. It remains pending up to now.

“I was arrested without warrant by the military, tortured, tagged a terrorist and criminal, incarcerated for 23 long months – left to suffer while waiting for your good office to carry out a favorable resolution to the Petition for Review we filed in September 2011.”

Acosta’s family and supporters are currently raising funds for his hospitalization. The government is not obliged to pay for his medical expenses.

Acosta’s parents are themselves undergoing medical treatment for various ailments.