You Are Here: Home → 2013 → January → 30 → Planned privatization of Orthopedic Center to paralyze services to poor

Planned privatization of Orthopedic Center to paralyze services to poor

“The transformation of the service orientation of public hospitals into a profit-driven venture and the shift of health care from the state to private entities is clearly privatization.” – Network Opposed to Privatization

MANILA –Every day at the social services department of the Philippine Orthopedic Center (POC), Maricel Manoos, 39, assists patients requesting for help.Many of these patients belong to “class D” or patients who cannot afford their hospital bill. Because a lot of cases being brought to the POC require long medication, these patients have already spent all their savings and yet their treatment still has to continue. Manoos said there are cases when relatives of some patients were forced to leave the sick at the hospital to look for money, only to fail to come back for them.

If the POC were to be privatized, Manoos fears many poor patients will be denied health services. “It is not just an issue of security of tenure of health workers. The worst impact of privatization is that our health services would no longer befree and the poor will be denied their right to a basic social service: health.”

Manoos and her colleagues at the POC, joined by hundreds of angry health workers, patients, urban poor and members of progressive groups, stormed the National Kidney Transplant Institute (NKTI) in Quezon City Friday, January 25, as the pre-bidding for the ‘modernization’ of the Philippine Orthopedic Center (POC) was being held there. Business tycoon Manny V. Pangilinan, Philips Corporation, General Electric Company, and a Jakarta-based company were reportedly among the bidders. 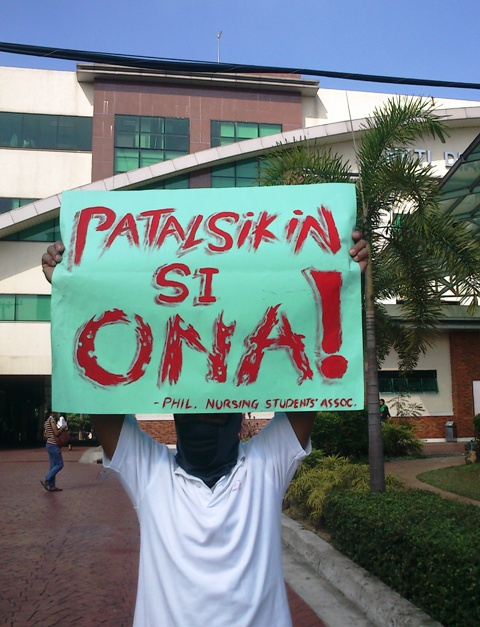 The POC is the pilot Public-Private Partnership project of PresidentBenigno Aquino III, supposedly seekingto build a modern 700-bed specialty tertiary orthopedic hospital via the build-operate-transfer scheme. It is worth P5.6 billion ($137 million). The winning bidder will also be entitled to a contract to operate and maintain the hospital for 25 years.

Under the project, the current orthopedic center in Banawe will be converted into a production center for artificial limbs and prosthesis.

According to the Department of Health, 75 beds of the new POC to be constructed in the NKTI complex in East Avenue, Quezon City will be for use of PhilHealth members and indigents, while the remainder will be for paying patients.

But according to 2010 POC data, only one in every five patients in POC is a member of Philhealth.

“This would definitely affect poor patients’ access to health care, whether they are PhilHealth members or not, because the rates would be set by the private concessionaire and hospital operators ‘based on existing market rates,’” said Bayan Muna representative Teddy Casiño in a statement.

Progressive groups fear that if the planned sale of the POC were to push through, the rest of the government hospitals would be next. They slammed Health secretary Enrique Ona’s statement that modernizing POC will not make health services expensive because the government still controls the public hospital.

Government health workers said their experience taught them that Ona’s statement is misleading. Mere government control of ‘modernized’ hospitals is no guarantee of affordable health services. On the contrary, health workers cited as example some government-owned and controlled corporations such as the Philippine Heart Center (PHC), Lung Center of the Philippines (LCP), Philippine Children’s Medical Hospital (PCMC), and NKTI, where health services such as user fees and laboratory tests are inaccessible to poor patients.

According to the Network Opposed to Privatization (NOP), data dialysis at the NKTI costs P3,500 ($87.5). There is no charity service available there and a policy of “no pay no hook” for dialysis is strictly being implemented. ‘No pay no hook’ means no dialysis session will be started unless one pays up first. At the LCP, a P10,000($250) deposit is required before a patient is admitted for hospitalization.

The NOP said corporatization, a process being undergone by the above government hospitals, is tantamount to privatization of public or government-owned assets and/or services. The NOP explained that the board of trustees which takes over its management, is mandated to enter into financial transactions that will generate profits, to attain fiscal autonomy and viability. “This is clear in the DOH Health Financing Scheme, which states that by 2020, all DOH-retained hospitals will be fully corporatized and will not receive government subsidy. The transformation of the service orientation of public hospitals into a profit-driven venture and the shift of health care from the state to private entities is clearly privatization,” said the NOP.

The POC is the only government hospital in the Philippines that specializes on bone diseases. According to Manoos, at least 400 to 700 patients per day avail of the POC’s out-patient department services. Many of these patientsare poor, she said.

Casiño said there is nothing wrong in improving POC’s facilities if the government would pursue it as part of its Constitutional mandate to uphold and protect the people’s right to health. “However, POC’s improvement was never a priority of the government, otherwise it should have allotted adequate budget to the POC.”

The new POC envisioned by the health department after this privatization scheme “will be similar to government-owned and controlled corporation (GOCC) hospitals where service patients get ‘free’ doctors’ services but pay for medicines, supplies, and confinement. This is in contrast to the present operations of POC where poor patients are provided bed, services and available medicines and supplies for free,” Casino said.

Even with the POC’s meager budget, Manoos said, they don’t let the patient leave the hospital without getting treated. “Many patients who come to the hospital don’t have enough money for laboratory tests, but they still get treated if they donatean amount they can afford. For example, a skeletal x-ray costs around P1,000 ($25). If the patient goes to social services department, the price can be reduced,” she said.

Dante Perez, vice president of the POC health workers union and an occupational therapist in POC,sacrificed one day of work to show his opposition to theprivatization of the POC and other government hospitals. “A true service is something we health workers give not just inside the hospitals. It is also our duty to protect our patients’ right to health services even if it is outside hospital premises,” Perez said. 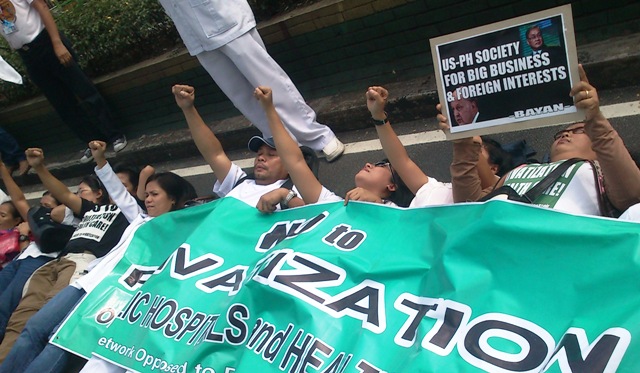 Employees from the psychology, social services, occupational and physical therapy departments of the POC also took part in the protest action at NKTI. Perez pointed out that they too, as human being, can get sick and they would need health services.They have nowhere else to go to for treatment but government hospitals.

POC, hospital for the poor

“They cried. They said they will support our protest in any way. They are willing to sign any petition so that the hospital will not be sold to private companies,” Manoos told Bulatlat.com.

The hospital’s facilities are indeed already dilapidated, said Perez. “When it rains, it also pours inside the hospital because of holes in the roof. There are many dilapidated areas inside. But our services remain affordable and most of the time still for free,” Perez said during the protest action.

In the occupational and physical therapy department alone, Perez said, they could have earned P10 million ($250,000) last year, but their income was just P2 million ($50,000). “This is because we give free services.”

Valentin Arciaga, 28, nursing aid assigned at the spinal ward, said there are patients who really have no more to shell out. In such cases, the health staff also shell out personal money for the patient. “If they needed diapers, tissue paper, we give them that,” Arciaga told Bulatlat.com. Those patients whose relatives cannot take care of them anymore are assisted by the hospital staff until the patients can go home on their own. Arciaga, for one, would change a patient’s diaper if no one else is around to do that for the patient.

“We don’t know when we will be sick and sometimes we really have no more to save for our health because we have spent it all for our daily needs such as food and other expenses. That is why it is important that health services, if not for free, should at least remain affordable for Filipinos. If not, what will happen especially to those who really have nothing?” Manoos asked.

According to the Network Opposed to Privatization, the Aquino government has lined up at least three public hospitals for privatization: the San Lazaro Hospital, the POC, and the Research Institute for Tropical Medicine (RITM). The Rizal Medical Center and the Eversly Child Sanitarium in Cebu and the Western Visayas in Iloilo are also up for sale. There is also a plan to establish a Multi-Specialty Center in Oncology, Neurosciences, and Stem Cell Research in DOH retained hospitals.

In an article, lawyer Ernesto Francisco questioned the confidentiality of documents surrounding the bidding process of the modernization of the POC. Francisco demanded that the document be uploaded at the DOH website, sayingthat the people has the “right to know and participate in the process of putting up a new orthopedic center and other government hospitals which the DOH is planning to put up with the participation of the private sector.”

Franciso was also quoted saying, “The public has the right to know if it can continue to avail of the medical care, services and facilities which are now being given for free to those who cannot afford to pay or at the least possible cost to those who can hardly afford to pay.”

The health groups, meanwhile, said their NKTI picket was just the first of their planned series of protests against privatization of government hospitals.
“We will protest the selling out of government hospitals; we will go wherever the bidding is. As long as health secretary Ona does not heed our calls he will still see us in the streets protesting against his anti-people policies,” said Health Alliance for Democracy secretary general Dr. Geneve Rivera.

“Health is a matter of life and death,” Casiñosaid. He added that“The responsibility of developing public health care should never be left to profiteering private enterprises. The privatization of public hospitals should be stopped.”