“It seems that they [the military] do not know the difference between a placard, a microphone and an M-16 rifle.” – Christian Tuayon, Bagong Alyansang Makabayan-Negros

BACOLOD CITY – How do I put thee in misery? Let me count the ways.

To activists, this is what Army officials seem to be thinking as they intensify the filing of charges not only against suspected members of the armed, underground revolutionary movement but even against activists working aboveground.

“It seems that they do not know the difference between a placard, a microphone and an M-16 rifle,” Christian Tuayon, secretary general of the Bagong Alyansang Makabayan (Bayan)-Negros, said.

Tuayon, who at 26 is the youngest secretary general of the multisectoral alliance in the province, was one of several leaders named by an alleged witness in the murder of an Army lieutenant. They have not been included in the information filed before the court, however, raising fears that they could be charged and arrested anytime.

Sanchez, who surrendered to authorities and claimed that he was a member of the New People’s Army (NPA) in the island, is an alleged key witness in the case filed for the death of 1Lt. Archie Polenzo who was slain in a gun battle with NPA rebels last March 7, 2010 in sitio Aluyan in the village of Caduhaan, Cadiz City.

In his affidavit executed in 2010, Sanchez said he was a platoon leader when the encounter happened and was “ordered” by more than 50 persons – among them the activist leaders – and all of which he allegedly knew “personally” to kill Polenzo.

The military claimed Sanchez was later killed by his former comrades in 2011.

Human rights defenders and activists deem that this is just an example of how prosecution has become a tool for “persecution.”

“Trumped-up charges are just the tip of the iceberg, something far worse is happening across the country,” lawyer Edre Olalia, secretary general of the National Union of Peoples’ Lawyer (NUPL) said during a visit in Bacolod to consult with activists who have already been charged for various crimes. 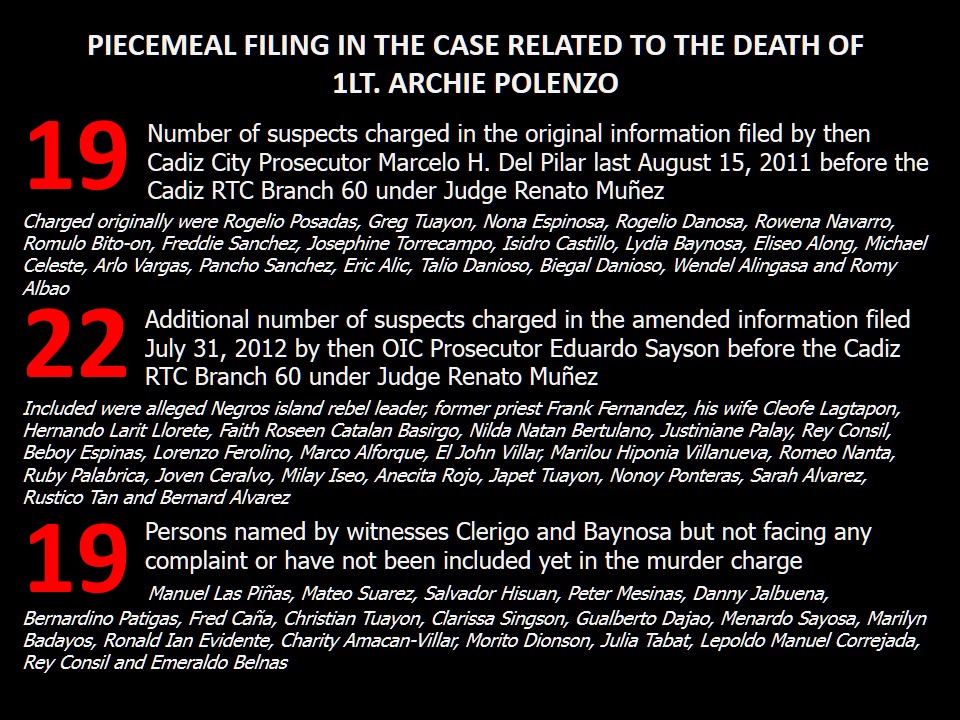 And to Olalia, there are five “very, very easy ways” for the Army to do this:

1. The mere substitution of names of John Does and Jane Does

A still unidentified suspect is named in a complaint filed before the prosecutor as a “John Doe” or a “Jane Doe.” During the filing of charges, the Army or the police would usually put in lots of Jane or John Does that would, eventually, be substituted with the names of activists.

The use “John Doe” started in England and is said to date back to the 14th century according to Internet resources.

The continued use of John Does is objectionable since Department Circular 50 Series of 1990 issued by then Justice Secretary Franklin Drilon prohibits it, Bayan Muna Rep. Neri Colmenares, also from the NUPL said.

In the case of Army lieutenant Polenzo, the original information was filed with 19 respondents and several others were added in the amended one (see illustration).

2. Mere allegation in the return of the warrants of arrest that Person A is also Person B

Another easy way, according to Olalia, is for authorities to declare that a person named in a warrant of arrest has a different identity.

A complaint is filed before the fiscal for determination of probable cause while an information is the charge filed in court as a result of the determination of probable cause made by the investigating prosecutor after a preliminary investigation, according to the Legal Competence Training Manual prepared by the Center for Media Freedom and Responsibility.

If a person is found to have a different name, a legal process has to be followed to have him or her included in the complaint. 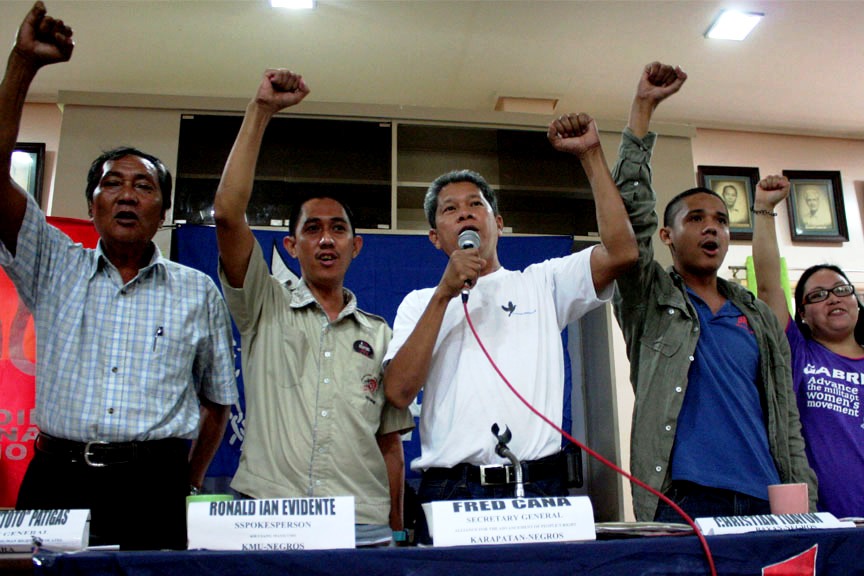 3. Concocted affidavits that are filed or produced after the filing of previous ones

An affidavit is defined as a “written declaration of facts” that is based on personal knowledge, made voluntarily, signed by the one making it and made under oath.

Olalia said that one tactic being used is for the inclusion of a person based on the affidavits that are revised, raising doubts as to their truthfulness.

This is remembering by installment, Colmenares said, which makes it suspicious why supposed witnesses of the military or police cannot give a detailed account in the execution of the first affidavit but would suddenly remember additional details if an activist is included in a specific complaint, he said.

4. By ridiculously asserting that respondents have unknown addresses

This lazy, legal maneuver, according to Olalia, is done by the simple assertion of those serving the subpoenas that the respondents, or those charged, have no known addresses, making it impossible to give it to them. By simply acknowledging this, the fiscal can go ahead with the preliminary investigation

A subpoena is a document that requires a respondent to appear and testify (subpoena testificandum) or to produce documents (subpoena duces tecum).

If a respondent cannot receive a subpoena, then he or she cannot submit a counter-affidavit within the required 10 days.

During the process of preliminary investigation, it would be determined if there is probable cause in the filing of a case and if a respondent has not submitted any counter-affidavit, the fiscal would resolve it based on the complaint filed before his or her office.

The problem with this is that those who are charged, like in the case of Tuayon and the others, are holding offices in Bacolod City, the urban center of Negros Occidental, yet they were not even informed about the cases filed against them and some have not even been served the subpoenas, Colmenares pointed out.