Despite the Philippine government having agreed to increased use of the country by US troops, warships and warplanes, there are no clear guidelines on what to do in cases of mishaps, accidents, etc.

MANILA – It is not the first time a ship ran aground at the Tubbataha Reef off Palawan. In fact, as the marine scientists who attended a discussion organized by Gabriela and Center for Environmental Concerns (CEC) last Friday attested, the last time they visited the reef, they had used the remnants of past shipwrecks as landmarks. Collecting samples for study of the reef, they said, requires a lengthy process of clearing it first with the authorities. As the reef has protected zone status, one cannot just sail into the area, catch fish or take off with anything.

That another ship ran aground in Tubbataha last January 17 was therefore not unprecedented. But what has happened since day 1 of its grounding up to now, show too many worrying firsts, according to the discussion at the University of the Philippines Diliman of environmentalists, scientists, academicians, lawyers, women’s groups and leaders of various peoples’ organizations. They urged the Aquino government to immediately act on these issues.

These unprecedented occurrences exposed by USS Guardian’s grounding include the following:

– The Philippine government’s ceding of command or control in the various issues of the grounding problem, from conducting investigation and seeking accountability on why the grounded ship had trespassed into the protected reef in the first place, to the day-to-day problem-solving of what to do with the ship to minimize the already inflicted damage to the reef; 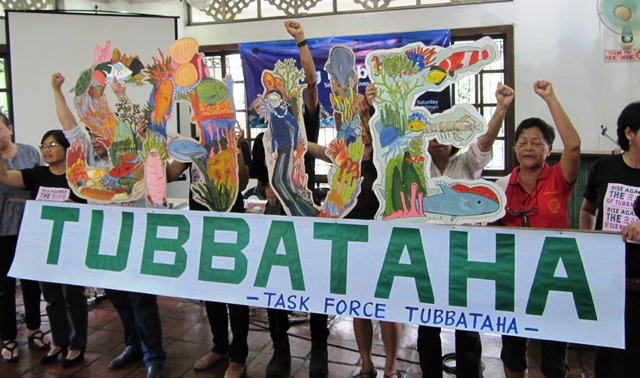 Leaders of various groups show their joint call after a discussion on Tubbataha Reef (Photo by Marya Salamat / bulatlat.com)

– The seeming lack, until now, of accurate charting or mapping of the Tubbataha Reef despite its having been declared a UNESCO World Heritage site. Related to this, the seeming lack of active effort to have the reef declared as a Particularly Sensitive Sea Areas (PSSA) which could have limited or restricted vessel traffic, discharges and resource exploration (such as oil and gas exploration) in the area.

– Despite the Philippines being an archipelagic country, and despite many Filipino’s dependence on fish and seafood, there remains a glaring lack of guidelines and clearly in charge government agency or body overseeing Philippine marine resources.

– Despite the Philippine government having agreed to increased use of the country by US troops, its warships and warplanes, there are no clear guidelines on what to do in cases of mishaps, accidents, etc.

Worse, while the Philippine government is showing leniency to the US Navy, they are showing the Filipino fisherfolk the opposite. Pedro Gonzales of fisherfolk group Pamalakaya said the fishermen in Palawan are highly affronted by the fact that some of them were apprehended recently, fined for up to P100,000 and threatened that their fishing boats would be impounded, when a bigger violator remained stuck at the reef, continuously destroying it and ravaging the breeding ground of fishes.

No action from Philippine government to take control

“The Aquino government should not give the US military the sole command and freedom to take action in removing the ship. It must make its own demands to make the US accountable for the destruction,” said Frances Quimpo, executive director of the Center for Environmental Concerns (CEC).

There is a big possibility this latest case of trespassing and grounding (at a protected reef) would also be set aside just like the other unresolved cases involving the US troops in the Philippines, Quimpo warned. She recalled the cases of ordinary peasants and fisherfolk killed by unexploded ordnances or hit by passing ships in past Balikatan military exercises. She said the US military always manage to go scot-free.

The UP academic community including some of its marine scientists volunteered to become part of a technical working group that would independently assess and investigate the actual damages on the reef inflicted by the USS Guardian. Some have also drafted proposals concerning the rehabilitation of the reef once the stuck navy ship was removed.

At present, the US and Philippine governments were reported to have estimated the damage to the reef as still small in comparison to the entire reef. But without transparency and an independent probe, this claim is being taken with a grain of salt by many who attended Satuday’s discussion at UP.

Nenita Gonzaga, vice president of Kilusang Mayo Uno, cited the Filipino saying: pain even in one’s tiny finger is felt by the entire body. The damage may be small as the government and the US Embassy are claiming, but as Rollon told Bulatlat.com, the damaged part can also happen to be an important part of the reef. He said there remains a need to assess the extent of the damage.

‘Aquino government has to take responsibility’

Renato Reyes Jr., secretary general of Bagong Alyansang Makabayan (Bayan), urged the public to take part in campaigns to compel the Aquino government to investigate those directly involved in the navy ship’s grounding at the reef. He said Aquino should also be compelled to assert responsibility over the reef’s restoration.

With Bayan, Gabriela, Pamalakaya and KMU also demanded that given how the Visiting Forces Agreement is “very vague” on mishaps and ‘accidents’ like the damaging of the reef and the dumping of untreated wastes on waters off Subic, the government needs to bar for the meantime the entry of more warships.

“No US warships mean no toxic wastes and no Tubbataha grounding,” Reyes of Bayan said.