You Are Here: Home → 2013 → March → 1 → Groups press for suspension, investigation of Secretary Soliman, other DSWD personnel

“The DSWD is accountable not only for its shameful act of ineptitude but also for its gross violation of the international code of conduct on disaster response which says that relief operations must not be discriminatory.”

MANILA – Survivors of typhoon Pablo managed to get official promises after three days of barricading the Department of Social Welfare and Development Region XI office that they would receive what they say is rightfully theirs.

The DSWD and leaders of Barug Katawhan have finally held a dialogue on Wednesday night, Feb 27 and they came into an agreement on how the relief goods would be distributed. According to a report of Davao Today, both parties agreed to the following:

1. In case there are inadequate supplies received, a strict validation would be implemented by a partnership of Barug Katawhan, Balsa Mindanao, local government units and the DSWD.

2. Quantities must be identified immediately as these are the basis for releasing relief goods.

3. Relief operations shall continue until June 2013.

4. Fast-tracking the validation of quantities of needed relief goods and identification of areas that received insufficient or no supplies, based on a list to be compiled by Barug Katawhan.

5. 100 sacks of rice to be given to protestors when they return to their villages.

6. No retaliatory measures between Barug Katawhan, local police and DSWD.

7. If there were any problems in implementing the agreement, representatives from Barug Katawhan, Balsa Mindanao, DSWD and an environmentalist group will immediately meet to discuss the issues.

On Monday, Feb. 25, about 5,000 Pablo survivors stormed the DSWD office and took some relief goods. They called it “organized retrieval” — they had waited for the 10,000 sacks of rice which DSWD secretary Dinky Soliman committed to them when they protested by blocking the national highway in Montevista town, Compostela Valley last Jan. 15. Davao Today reported that the survivors took with them 593 boxes of noodles, 52 sacks of rice and 820 sacks of assorted goods. 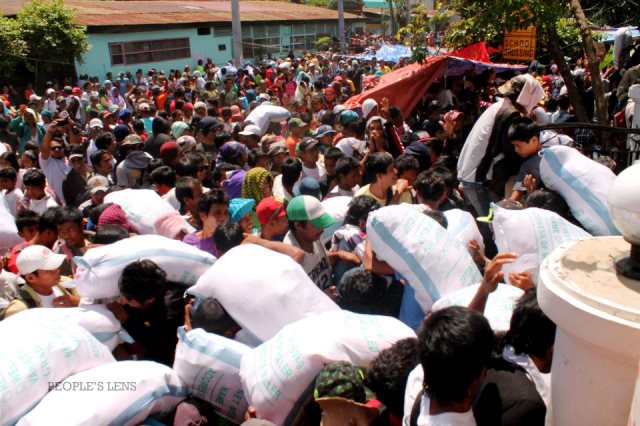 Survivors of typhoon Pablo call this “organized confiscation” of relief goods. It had been earmarked for them but a long list of DSWD requirements had reportedly hampered its distribution. (Photo by Peoples’ Lens / bulatlat.com)

After the ‘retrieval,’ the survivors camped out in front of the DSWD office. Confrontations between the police and protesters broke out resulting to the arrest of some Pablo survivors. News reports on television also showed policemen beating up at least two of the survivors.

Come Wednesday night, groups and individuals supporting the survivors’ struggle posted on Facebook their gains of three days of barricading before the DSWD.

Liyang Miñoza of Barug Katawhan reported an update in a post, “Relief operations to continue for six months with all listed survivors as beneficiaries; 100 sacks of rice to be immediately released upon signing of agreement; all charges against leaders dropped, and those detained to be released immediately.”
Miñoza is referring to the charges filed against the leaders of Pablo survivors who put up the barricade last Jan. 15.

Karlos Trangia, spokesman of Barug Katawhan, said: “We celebrate this gain with vigilance. We will continue to expose and oppose corruption and fight for environmental justice.”

He was also quoted as saying, “After three days of intense protest, which resulted in several confrontations, we have finally achieved what we came for. This is a victory for the people.”

Progressive groups expressed support for the struggle of typhoon Pablo survivors. Amid threats of filing charges against the survivors, which was aired by DSWD Secretary Dinky Soliman, progressive groups blamed instead the DSWD’s “ineptitude” at relief distribution. They slammed Soliman’s stringent requirements before distributing the DSWD relief goods.

Soliman was quoted as saying that the DSWD has been asking for a master list of the recipients of relief goods, but no one can give them the master list.

Barug Katawhan or People Rise Up replied that it is not their job to give the DSWD such master list. On the other hand, they said, it is the job of the DSWD to distribute relief goods. As such, in not immediately releasing said goods, “the DSWD is not doing its job and actually violating the international code of conduct on disaster response.”

“Passing on to the victims the burden of making the relief distribution list is grossly unjust and unethical,” Trangia said. He added that “The DSWD is accountable not only for its shameful act of ineptitude but also for its gross violation of the international code of conduct on disaster response which says that relief operations must not be discriminatory. Everyone in a totally-devastated area like ours in Compostela Valley and Davao Oriental must be served.”

Renato Reyes, Jr., secretary general of Bagong Alyansang Makabayan (Bayan), said the reaction of the DSWD and its secretary is utterly appalling. “Instead of squarely addressing the protesters’ demands, Soliman has resorted to all sorts of diversionary tactics, even to the point of questioning whether the protesters were indeed typhoon Pablo’s victims. This is grossly insensitive.”

Reyes said that a statement posted on the DSWD website lists some conditions for distributing relief goods. These include a list indicating the name and address of recipients; list of names of responsible persons who shall guarantee the safe distribution; a requirement that the distribution has to be witnessed by the DSWD and provincial and municipal local government representatives, and that the release of rice will be held at the Typhoon Pablo Relief Operations Center at the Department of Public Works and Highways Depot in Panacan, Davao City. The DSWD also required an acknowledgement that the relief goods came from the government, a distribution report ‘consistent with actual distribution,’ and storage of rice that follow safety standards.

“Dinky insists on requirements as if it’s not more than a month since she promised to release 10,000 sacks of rice to the survivors. Her agency should have taken a more pro-active stance already and listed down the names and number of people who haven’t received relief goods,” said Roger Soluta, secretary general of Kilusang Mayo Uno (KMU).

Trangia stressed that they are victims of typhoon Pablo and since the disaster, many of them have received only three batches of relief goods which were not enough to alleviate their hunger. He said “We learned that there are still undistributed goods intended for the victims of typhoon Pablo. We will not leave unless we are heard. We are here once again not to beg but to claim what is rightfully addressed to us,” Trangia said.

The Union of People’s Lawyer (UPL) commented in a statement, “It seems that Soliman is giving the survivors the legalistic and bureaucratic run-around in order to renege on the January 15 negotiations.” They reiterated Barug Katawhan’s proposal to the DSWD for it to work closely with local government units in obtaining the master list, rather than exact an additional burden to the already hungry, jobless, and grieving survivors of typhoon Pablo.

The lawyers group added, “This incident is not a question of legality; it is a question of justice and human rights. The state has an obligation to address the grievances of its people, and ensure the safe guarantee of the people’s right to food, shelter, and freedom of expression.”

Terry Ridon, national president of Kabataan Partylist, said the issue is still “far from over.” He stressed that the allegations of corruption in DSWD need to be investigated and those involved in alleged mishandling of funds for relief and rehabilitation should be held accountable. “Just because there is already an agreement on relief distribution doesn’t mean the talks are now over,” Ridon said.

“Though this is an initial victory for Barug Katawhan and for thousands of victims who stood up for their welfare, we must still hold accountable the erring DSWD officials. Ultimately, the Aquino administration must be held accountable too for implementing policies that resulted in disasters, and leave thousands of families homeless and deprived of their livelihood,” Ridon said.

There are reports of DSWD’s alleged mishandling of the P18 billion ($442 million) worth of calamity funds and international aid pouring in for victims of typhoon Pablo.

Kabataan Rep. Raymond Palatino is set to file a resolution urging Congress to probe reports of corruption and mishandling of calamity funds and international aid. Palatino said the corruption in DSWD has delayed the distribution of relief goods to thousands of Pablo victims in Compostela Valley and Davao Oriental.

Palatino said they have been receiving reports from former DSWD employees and typhoon victims that the DSWD is “systematically” siphoning off millions of pesos from calamity funds through falsified liquidation forms, purchase of overpriced goods and services, and hiring of “ghost employees.” These funds are intended for relief and rehabilitation of Pablo victims.

Obenza worked as a disaster response team leader during Typhoon Pablo. He reported that the said DSWD officials forged liquidation documents for the relief funds, and they received kickbacks from certain DSWD infrastructure projects and construction of overpriced bunkhouses.

The former DSWD employee also disclosed that there are “ghost laborers” in the payroll of DSWD’s ongoing rehabilitation efforts.
Joms Salvador, secretary general of Gabriela, called for the immediate suspension of the DSWD personnel involved in the corruption charges. She called for an investigation to scrutinize officials up to the highest levels to determine their involvement and accountability in the allegations of corruption. “For the sake of delicadeza, DSWD secretary Dinky Soliman must resign while investigations are ongoing. She herself is accountable for the corruption in her department.”

Salvador said her group fears that the “stolen” money will be used for the campaign of candidates or partylists associated with the administration. She urged the public to be vigilant and active in going after such allegations of corruption.

“The public should know what is happening there. If Sec. Soliman claims she does not know of the irregularities, then that is sufficient proof of her incompetence as DSWD head because she should always be on top of the situation and aware of what is going on in her department,” Salvador said.