Schools and village halls are being used as camps by soldiers. Residents have to seek the permission of the military and sign in their logbooks whenever they go in and out of the community.

GUINOBATAN, Albay – Before Felix Paz, 81, became a peasant leader in the Bicol region, he was a farmer himself. Having his own share of hard work in the fields during his days as a farmer, Paz told Bulatlat.com, life is harder for farmers now because – they do not just worry about making a living. Their rights are violated by no less than the government itself.

Paz was among the supporters of farmers from communities in Guinobatan, Albay who held a protest action last Feb. 25. Though it coincided with the commemoration of the first EDSA uprising in 1986, their protest was far from celebrating the supposed restoration of democracy in the country.

Peasants from Bicol region held simultaneous protest actions in Guinobatan, Albay, Bato, Camarines Sur and in Barcelona, Sorsogon against the continuing militarization in their respective communities.

“We are united in fighting for our basic rights,” Vince Casilihan of Karaptan – Bicol, said. 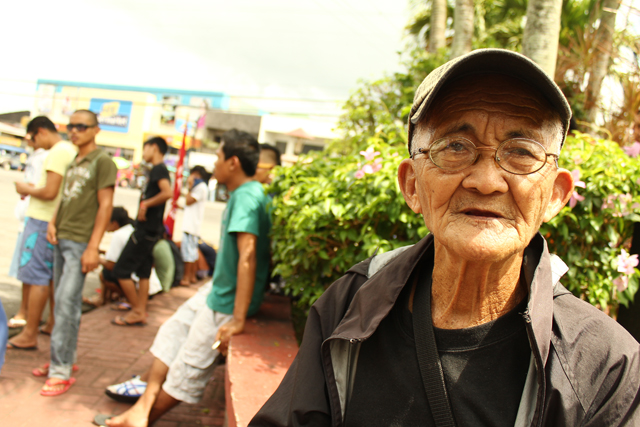 Felix Paz says life for peasants would be better if militarization is lifted in the region (Photo by Janess Ann J. Ellao / bulatlat.com)

Karapatan-Bicol said the Aquino government tried to sugarcoat Oplan Bayanihan by calling soldiers conducting military operations as “Community Peace and Development Teams.” But in reality, they said, violence lies beneath the military’s relief and disaster response and supposed campaigns on human rights.

Under President Aquino’s Oplan Bayanihan, a counterinsurgency program patterned after the U.S. Counterinsurgency Guide of 2009, the human rights group said, nothing much has changed.

The human rights group documented 86 cases of human rights violations from July 2010 to December 2012. These include harassment, killings, torture, physical assault, surveillance, use of schools and other public facilities for military purposes, among others.

“(One common occurrence) is the interrogation of residents, who, soldiers claim, are supporters of the New People’s Army. Ordinary peasants and workers who are living in rural communities need not become victims of these human rights violations,” Casilihan said.

In the village of Pood, one of the pilot areas of Oplan Bayanihan, Meriam Pardines, 32, was tagged by members of the military as a supporter of the New People’s Army. In a fact sheet sent by the human rights group to Bulatlat.com, Pardines was summoned by the soldiers at around 10:30 a.m. She was brought to the community’s chapel for interrogation.

“According to Meriam, one of the soldiers placed a knife on the table while the investigation was happening. There were several times when soldiers acted as if they would slap her because she, according to them, was lying. They threatened her that they would burn down their house if they find out that she was lying. The interrogation lasted for about 30 minutes,” the report read.

In another pilot area of Oplan Bayanihan, in the village of Bololo in Guinobatan, residents heard three gunshots coming from the direction of the 2nd Infantry Battalion detachment in their community on Aug. 15, 2011. Karapatan – Bicol reported that these gunshots were fired by soldiers who were having a drinking spree at that time.

The following day, at around 1:30 p.m., peasants Anna Brenda Rosero, 40, Oscar Rosero, 44, Benito Mangampo, 46, Ramon Bangampo, 58, Faustino Paje and Nelson Paje were invited to the military barracks. Soldiers took their pictures of them and told them to put their thumbmarks on a blank paper, which would supposedly “clear” their names. They refused to do it.

As a result, six of them were told to pay the military a visit three times a day to sign in their logbook.

Forced signing in logbooks of the military is also happening in other villages of Guinobatan.

In Sinungtan, Severito Ortecio was invited to the village hall by the military on Aug. 4, 2011. He was interrogated by soldiers and tagged as a supporter of the New People’s Army, Karapatan – Bicol said in its report. According to soldiers, Ortecio is an active members of the “Milisyang Bayan,” whose name purportedly appeared on a list they got from the rebel group.

He was forced to sign a blank paper to supposedly “clear” his name but he refused. As a result, the military wanted him to go to their barracks everyday to sign in their logbook.

His neighbors Salvador Oyardo and Rudy Rosales were also invited by the military to go to the village hall on Aug. 16, 2011 on two separate instances. They, too, were interrogated and were forced to admit that they are supporters of the New People’s Army and that they regularly attend the meetings the rebel group held.

“(Oyardo) was also threatened that if he would not admit it, something bad would happen to him and to his family,” the report read. Soldiers then took Oyardo’s photo, with him on it holding a placard that read “GMP.” He was also asked to sign and put his thumbmark on a blank paper.

“Peasants could no longer go out of their villages. They have to ask the permission of the military and sign in their logbooks. They now see soldiers as their landlords,” Casilihan said.

Casilihan added that soldiers said they have to keep peasants from going in and out of the community as for “security purposes.”

“They said they need to monitor every move of residents. And so that members of the New People’s Army could not visit the community,” he said.

Troops belonging to the 42nd Infantry Battalion arrived in the town of Bato in Camarines Sur on October 15, 2012. They reportedly visited former town mayor Jaime Gonzales to coordinate their deployment not the incumbent mayor Jeanette Bernaldez. Among the villages where there are confirmed military deployments are Buluang, Payak, Salvacion, Sooc, Cotmon. Cristo Rey, Guyudan, San Juan, San Roque, Sagrada, San Isidro and Pagatpatan. About 10 to 16 soldiers are deployed in each village.

In the village of Sooc in Bato, Camarines Sur, residents decried the occupation of their health center for military purposes. Soldiers also stationed two of their barracks in the middle of the community, which, according to Karapatan-Bicol, “poses danger to residents should there be a gun fight between soldiers and the New People’s Army.”