Karapatan-Bicol, in its report, said they also tried to reach out to locals of the village of Cotmon, also in Bato, but the villagers were afraid to talk to them. Again, they cited fear from soldiers who are also deployed in their community.

Here, soldiers, too, used their village hall, which is surrounded by homes belonging to locals, for military purposes. According to a village official, they allowed the military because “they were not using it.”

Locals, too, have been summoned in village halls by soldiers, where they were reportedly interrogated and tagged as supporters of the New People’s Army, Karapatan-Bicol said. There were 15 and 20 documented cases of interrogation in the village of Sooc and Payak, respectively.

Even village officials, themselves, were not spared from interrogation. Kagawad Roland Reyes was summoned four times by soldiers deployed in Buluang since the troops were deployed there last Oct. 9, 2012. Another local, Jessie Talagtag, was also invited to go to the military barrack and was tagged as a supporter of the New People’s Army.

Karapatan-Bicol, on the other hand, reported that in Buluang, five locals were hurt because of indiscriminate firing reportedly committed by members of CAFGU. They are Romar Talagtag, 36, Jerson Talagtag, 36 and three minors Gerald Din, 16, Jasmin Talagtag, 11, John Paul Talagtag, 6. 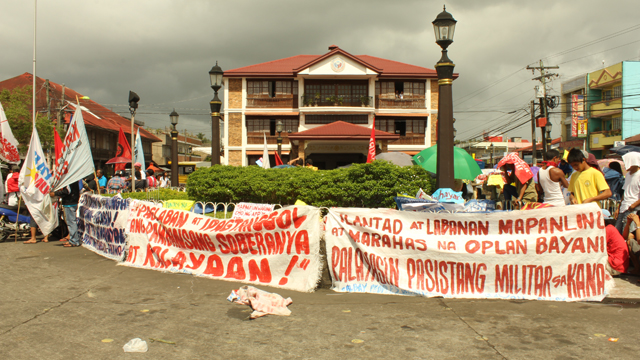 Peasant families asked for the assistance of the local government code to address the human rights violations but to no avail. (Photo by Janess Ann J. Ellao / bulatlat.com)

“Even with all the documented abuses of the military, the local government does not lift a finger to pursue justice for the victims,” Karapatan-Bicol said in a report the group sent to Bulatlat.com.

The group, together with the Ecumenical Bishops Forum, held various dialogues with local government officials. But to no avail.

“There were several instances when we reached out to the local government officials of Guinobatan but there was no response, which could directly address our concerns on human rights violations,” Casilihan said.

“Somehow, it was of help that the (Commission on Human Rights) came up with an advisory, forbidding the military to use schools and village halls,” Casilihan said, “They followed (the advisory) for a while. But a year later, we observed that they started using schools, village halls, among others, for military purposes.”

“(The military) is using these public facilities as a place where they could have their drinking spree, their home and their barracks,” he added.

Militarization, according to peasant leader Paz, is endangering livelihoods of farmers and farm workers, who are also facing cases of displacements from land owners.

These farmers, he said, earn mainly from planting rice and coconuts. “According to our study, they earn roughly $2.25 a day,” Paz said, “There were cases that peasants left the community and the land they are tilling because they were afraid of the harassments they were getting from the military.”

Paz said he got several reports that when a peasant is seen doing work in the fields, “a soldier would go to him and interrogate him if he saw a member of the New People’s Army in the area. If they respond that they have not seen any, the soldiers hurt them.”

He was consistent in saying that these kind of harassments never happened during his time. He started working in the fields at the age of 12 to support his family. Harassments, for his part, from state security forces later came into the picture. He has been charged with trumped-up cases, and had “visits” from the military, when he was already known as one of the most outspoken peasant leader in the region.

“Peasants usually wake up early in rural areas. They do not go out to the fields when it is still dark. They also go home earlier than before,” Casilihan said, “They could not go and do as they wish. They fear that if they do something, which soldiers might deem as out of the ordinary, they would be interrogated or worse, killed.”

Paz also expressed his concerns for several peasant families who are sending their daughters to Manila to work as household help for fear that they might be impregnated by soldiers. “It is tearing families apart.”

Casilihan said they received reports where soldiers impregnated women from the communities. Their families, however, did not want to speak out because they are worried of the embarrassment it might cause them.

Aside from calling to put an end to militarization, activists from the Bicol Region also remembered those who have died under the government’s Oplan Bayanihan, and lamented that justice remains elusive.

Last Feb. 25 was the first year since the killing of the Mancera family – Benjamin and sons Michael and Richard. The military claimed that it was a legitimate encounter and that Benjamin was a New People’s Army fighter. But Karapatan-Camarines Norte and Karapatan-Bicol concluded after its three-day fact finding mission that the incident was a massacre.

“Oplan Bayanihan here in the Bicol Region is violent, bloody, inhumane and deadliest in the history of our region. It is bloody because only under Aquino, 37 individuals have become victims of extrajudicial killings. Children, mothers and even village officials, too, are not spared,” Casilihan said, “Even those who are not members of progressive groups are falling victims to human rights violations.”

As for 81-year-old Paz, his only hope is for militarization to be lifted in their communities. “Life would be more productive if there is no militarization. They do not have to be afraid anymore.”