After typhoon Pablo struck the province, Gov. Corazon Malanyaon and Lt. Krishnamurti Mortela of the the Army’s 67th Infantry Battalion created the Incident Command Post (ICP). All the relief goods are in the military camp and the command for relief distribution comes from the 67th IB, and residents of Binondo, Cristina Jose’s village, said they only received help once, and instead of ten kilos of rice per household, they were given only five kilos.

MANILA – Cristina Jose, a leader of an organization of Pablo victims, received threats from soldiers stationed in the community before she was killed.

This was the result of the initial investigation of the quick reaction team (QRT) formed by Karapatan-Southern Mindanao Region (Karapatan-SMR) who went to the site a few hours after the incident. A copy of the fact sheet prepared by the team was sent to Bulatlat.com.

Jose, 40, a mother of three, was shot dead by unidentified assailants in Baganga bridge, Davao Oriental, March 4. At around 5 p.m. that day, Jose, and her youngest daughter were riding a motorcycle driven by her niece when they noticed three men on board a motorcycle tailing them.

Jose’s daughter, Dona (not her real name), 11 years old, told members of the QRT in the vernacular: “…[t]he man on the middle was holding the gun and he shot mama. I could not recognize them because it happened too fast. When we stopped, they also stopped and then moved forward (about 3 meters) and looked at mama. Maybe they wanted to make sure that Mama is dead. When they saw mama lying on the road, they left and sped toward barangay (village) Lambajon.”

Jose sustained a single gunshot wound at the left side of her back that went through her right breast. When she was brought to a lying-in clinic, the victim was declared ‘dead on arrival.’ 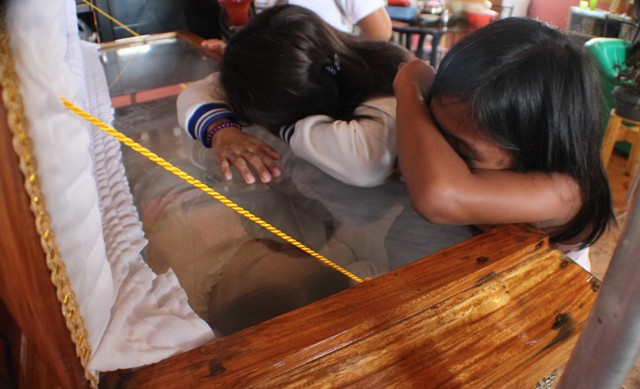 Two of Christina Jose’s children mourn the death of their mother. (Photo courtesy of Karapatan-SMR / bulatlat.com)

Jose, a councilor of Binondo village in Baganga municipality, Davao Oriental, and a local leader of Bayan Muna party list, was very active in demanding relief for their village.

After typhoon Pablo struck the province, Gov. Corazon Malanyaon and Lt. Krishnamurti Mortela of the the Army’s 67th Infantry Battalion created the Incident Command Post (ICP). All the relief goods are in the military camp and the command for relief distribution comes from the 67th IB.

In a phone interview with Bulatlat.com, Hanimay Suazo, secretary general of Karapatan-SMR, said that Jose complained of the delay in the distribution of relief goods to the remote village of Binondo.

The soldiers branded the residents as supporters of the New People’s Army (NPA) and claimed the residents would just give the relief goods to the rebels. Because of the labeling, residents of Binondo said they only received help once, and instead of ten kilos of rice per household, they were given only five kilos.

This prompted Jose and the residents of Binondo village to join the barricade in Montevista, Compostella Valley in January. There, they formed the Barug Katawhan, with Jose as one of the conveners representing the east coast of Davao Oriental.

Jose’s friend, Esther, told the team that the ICP was furious with Jose.

A resident of Binondo, also a village councilor, was told by a soldier to “be wary of your neighbor (referring to Jose) because she asked for the deployment of NPA members in Limot subvillage, Binondo.”

The soldiers knew that the NPA guerrillas were the first to hold rescue operations in the remote community of Binondo. The residents said the NPA members distributed relief goods and helped them repair the damaged houses even before the government came.

Even before typhoon Pablo, Mortela, head of the military’s ICP, tagged Jose as “councilor of the NPA.”

A certain Max, a rebel returnee, now a regular member of the 67th IB, would go to the house of Jose, drunk, and point a gun at her.

Karapatan-SMR’s Suazo said Jose exposed the food blockade and other forms of harassment to their community in a press conference in Davao City, which earned the ire of the 67th IB.

According to a neighbor of Jose in Lucob village where Jose also maintains a house, Max would often go to the victim’s house and ask for her whereabouts.

When Jose and some 84 residents of Binondo went to the regional office of the Department of Social Welfare and Development (DSWD) in Davao City for the three-day camp-out, Max was seen, wearing a police uniform, taking photos and video of the protesters.

After the camp-out, on March 1, Jose reported to Karapatan that soldiers were harassing them. They were also threatened by some government officials that they would be blacklisted because they joined the camp-out. This was the reason why Jose had decided to go back to Davao City to report the cases of harassment.

Before proceeding to Davao City, Jose attended the session of the Barangay Council on March 4, to assert the correctness of their decision to join the camp-out at DSWD in Davao City. According to her niece, MM (not her real name), who accompanied her, there was heated arguments during the session. The session started at around 1p.m. and ended at 3:30 p.m. that day.

MM said they decided to go to Davao City early morning of March 5. After the meeting, the two immediately went back to their house in Lucod and reserved a van for their Davao trip. Unfortunately, Jose was shot dead.

“Clearly, the killing is politically motivated,” Suazo told Bulatlat.com. “Kagawad Cristina (Jose) was under surveillance and threatened before she was killed.”

Reacting to statements by the 67th IB denying any involvement in the incident, Suazo said: “The circumstantial evidence is strong.”

Suazo, who led the QRT, noted that the local police took “too long to respond” to the crime.

The nearest police station is 250 meters away from the site of the incident, Suazo said.

Chief of Police Renato Duldul told the QRT they never found any empty shell or bullet in the crime scene.

Karapatan-SMR calls on the Commission on Human Rights (CHR) to conduct an independent investigation of the incident.

In a protest action in front of the Department of Justice, March 6, Tanggol Bayi and Karapatan condemned the killing.

Jose is the first woman victim of extrajudicial killing documented by Karapatan this year, and the 18th, including four minors, since President Benigno Aquino III took office.

Palabay said most of the women victims of extrajudicial killings under Aquino were human rights defenders. “They are leaders or members of people’s organizations,” Palabay said.

There are also 33 women political prisoners under the Aquino government.

“These women are mostly those who exercise their rights to be involved in political and socio-economic struggles of the people. Yet, this government sees them as enemies and are often victims of human rights violations,” Kiri Dalena, convenor of Tanggol Bayi, said.

“If President Aquino thinks the people will be pacified through intensified state terror, he is mistaken. More women will assert their rights and will fight for justice,” Dalena said.