You Are Here: Home → 2013 → March → 21 → Election watchdog asks Comelec to prepare for ‘all contingencies,’ after it failed in AES preparations

Election watchdog asks Comelec to prepare for ‘all contingencies,’ after it failed in AES preparations

“With two months to go, there is very little Comelec can do to drastically fix the flawed automated system.” – Fr. Joe Dizon

MANILA – Less than two months before the midterm elections, the Commission on Elections has yet to address the problems besetting the holding of an automated election.

Last Thursday March 14 the poll watchdog Kontra Daya called on the Comelec, urging the body to prepare for all possible contingencies including a manual count should machines utterly fail. Fr. Joe Dizon said we have a strong basis to worry about the outcome and conduct of the automated elections, and the possibility of its failure. He said that should things go wrong, such is the situation with the automated elections that “the candidates’ problems now include how to protest.”

Kontra daya held an assembly at San Agustin Church in Intramuros, Manila, before marching to the offices of the Comelec where a fire truck, some policemen and the building security had cordoned off the main entrance.

Fr. Dizon and other conveners of Kontra Daya were allowed to enter the Comelec office to personally deliver their letter to Comelec chairman Sixto Brillantes. 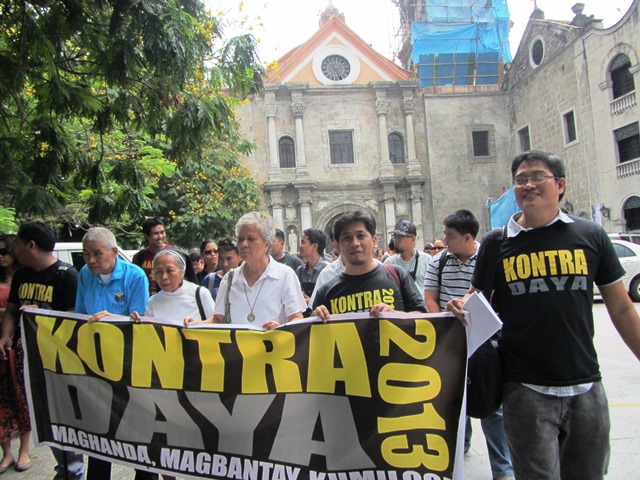 They march to Comelec urging it to work for a clean and honest elections. (Photo by Marya Salamat / bulatlat.com)

“I hope Brillantes will listen instead of engaging us in a fight,” Dizon told Bulatlat.com in Filipino. He explained that the Comelec has a duty “to do everything, to have contingency measures, for example, in case it (automated elections) fails.”

“With two months to go, there is very little Comelec can do to drastically fix the flawed automated system,” Dizon said, thus making preparation for all contingencies more urgent.

Kontra Daya reiterated that as it was during the 2010 elections, they are concerned over the accuracy of the PCOS count, the reliability of the machines and the lack of safeguards in the transmission of the results. Kontra Daya has previously observed cases of rejected ballots that threaten to disenfranchise voters.

The group said it was appalled that the matter of the source code review by interested parties, an issue that is mandated under the law, is still the subject of negotiations between the Comelec and the software provider.

“Is Comelec deliberately undermining its own preparations for the automated elections? We cannot draw confidence from the statements of Chairman Brillantes that all is fine with the AES,” Dizon said.

Rick Bahague Jr of the Computer Professionals Union (CPU), told Bulatlat.com that except for the Comelec mouthing some general instructions, there was no change implemented in the automated elections system despite the various recommendations given to it by various IT experts. “Everything we have seen in 2010, and recommended since 2009, have all been ignored,” Bahague said. Kontra Daya has previously warned that many of the glitches and vulnerabilities of the automated election system from the 2010 polls have not been addressed by the Comelec.

As the PCOS machines are now being moved to various locations, Bahague said that by now, it would be useless to hold a source code review, even if the Comelec suddenly allowed for one.

Kontra Daya data pointed to the conclusion that the Comelec preparations have rendered the 2013 elections vulnerable to a broad range of bungling. The whole preparation for AES is already a failure, the group has said earlier.

The election watchdog said it will field nationwide monitors and gather information on the conduct of the 2013 elections. They have set up a website www.kontradaya.org as monitoring site where viewers can track incidents all over the country.

The concern is “to have honest and clean elections,” Fr. Rudy Abao, Missionary of the Sacred Heart, said.

Kontra Daya is encouraging volunteers to come forward and help in their monitoring, to use their mobile devices’ messaging system and the social media to post reports. Kontra Daya said it will gather all these together in one site and also plot it in a map so Filipinos can visualize where the reported irregularities are taking place. So far, church people have volunteered to join.