By JANUARY A. TURLA
Northern Dispatch

BAGUIO CITY — The family of James Balao, along with members of the Cordillera People’s Alliance (CPA) and Cordillera Human Rights Alliance (CHRA) celebrated James’s 52nd birthday at the University of the Philippines Baguio (UPB).

On April 19, James’s family and colleagues reunited to commemorate his birthday and to mark the 1, 677th day of his disappearance since his abduction in Tomay, La Trinidad Benguet on September 17, 2008.

Earlier reports showed that heavily armed men who introduced themselves as police officers abducted James along a busy highway a few meters away from the regional headquarters of the Philippine National Police.

The celebration also served as the official launch of the folding of a thousand paper cranes carrying short messages for James. 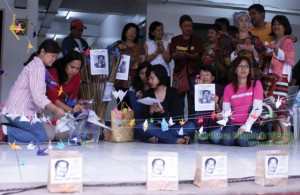 Family, friends, colleagues and students fold thousand of paper cranes with short messages wishing for the surface of James Balao’s during the celebration of his i52nd birthday at the University of the Philippines Baguio. It will be barely the 5th year since his abduction in Tomay La Trinidad in 2008, April 19. (Photo by Brenda S. Dacpano / nordis.net)

A short program was held at the UPB lobby as people talked and remembered James’s endeavors before his enforced disappearance. Nonette Balao, James’s sister, represented the Balao family and read a birthday message to his brother.

“He missed to celebrate four of his birthdays with us. This is the fifth. Nevertheless, we never forget to celebrate it with or without him. It feels empty to celebrate a birthday without him though. But what can we do? He was taken away from us forcefully and we were left with no choice but to deal with this emptiness,” Nonette read.

Joanna Cariño of CPA also shared her experiences with James in their fight for the indigenous people and land rights. She further said she was with him when they formed CPA and that he was an integral part of the process.

Other members of CHRA and CPA and writers of Outcrop, the official publication of UPB which James once edited, read poems for him. Paper cranes were pinned to an installation and sky lanterns were flown as people hope for his surfacing. Northern Dispatch