With the rate the Philippine government is going about the repatriation of stranded OFWs in Saudi Arabia, only a handful would be able to leave before the July 3 deadline set by the Saudi government.

MANILA – As soon as she felt the plane hit the ground, Marian Guinto, a Filipino worker who just returned from Saudi Arabia, said tears fell down her face. It was hard to believe that after weeks of campaigning for their repatriation, she would soon be in the arms of her family. But, she said, this will not be the end of it. Guinto vows to work for the repatriation of her fellow stranded Filipinos in Saudi Arabia.

“I hope that they will be repatriated soon – all of them and for free. Like me, they too have their families and children waiting for them here,” Guinto told Bulatlat.com after a dialogue between officials of ther Overseas Workers Welfare Administration and leaders of Migrante International and overseas Filipino workers who arrived from Saudi Arabia.

Guinto left the country in 2010 to give her husband and two children a better life. She worked as a domestic helper in Jeddah. But Guinto was forced to leave her employer when the driver of the household sexually harassed her.

She said the driver forcibly hugged and even attempted to kiss her. Guinto did not inform her employer about what was happening because they would not believe her anyway. Earlier, when she told her employers that she was experiencing asthma attacks because of the workload, they did not believe her.

“How do I expect them to believe something more serious such as that?” she said, referring to the driver’s sexual advances on her.

Guinto tried to make a living in Saudi Arabia, along with other Filipinos who were forced to leave their employers due to similar cases of abuse or not getting paid on time. But things became more difficult with the implementation of the Saudization policy. Under the said policy, companies in Saudi are required to hire Saudi nationals to comprise at least 10 percent of its total workforce.

The Saudization policy has resulted in a crackdown on stranded and undocumented migrant workers, which did not only include Filipinos but other nationalities as well. The Saudi government announced that they are extending the grace period for undocumented workers to leave the country without being arrested to July 4. Migrants’ rights groups estimate that there are more than 7,000 undocumented Filipinos in Saudi Arabia who have expressed their interest to be repatriated since the last quarter of 2012.

So far, only a handful of Filipinos have been repatriated. 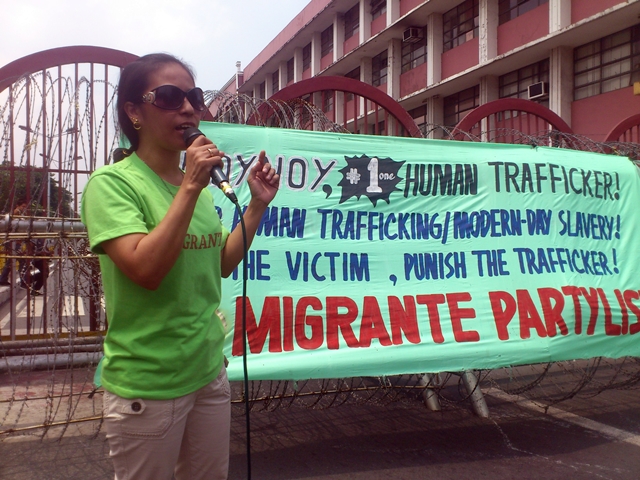 On June 4, 2013, Guinto arrived in Manila. She was happily welcomed by her family. And though she felt relief in being home, she continues to worry about the safety and welfare of Filipinos she left behind. She joined the dialogue between officials of OWWA and leaders of Migrante International on June 6 to make sure that her fellow stranded OFWs in Jeddah would be heard and represented, through her.

Guinto said the condition of Filipinos at the tent city in Jeddah is deplorable. The hot weather there is incomparable to what the country is experiencing, she said.

“Every time we go near the Philippine consulate to stay under the shade, officials there would drive us away,” she said, adding that, “it is so hot there you can feel the heat penetrating your scalp.”

The tent city, she said, would not have survived if their fellow Filipinos there did not donate food and water to stranded OFWs. “But we were always lacking in water. As I have said, it is very hot there.”

Tents were also donated to them.

Guinto used to have a camping tent. But another Filipino with children asked if she can have it. “I gave it to her, for her children.” She then slept on carton boxes night after night.

Around the second week of May, Guinto agreed to be taken to a deportation center, in hope that this could fast track her repatriation. But she did not expect that she would experience a far more deplorable condition.

“There were so many of us inside a cell. They put food in a basin and we all ate from it. We were treated like animals. We were given rice only once a day,” she said.

She still slept on carton boxes. While there were blankets for sale inside the deportation center, she said, she did not have a single riyal to buy one.

When they were finally told that they were going to be repatriated, Guinto said, she was very happy and excited. But on their way to the airport, another fellow Filipino woman was asked by a Saudi policeman to go with him. She thought that the Saudi policeman only wanted to check her bag. But Guinto said they were wrong.

“She told me that the Saudi policeman locked the door and told her to remove her clothes. He made her touch sensitive areas. My friend was very angry when she was finally released by the Saudi policeman. She said they are animals,” Guinto said.

Lisa Deres, 68, told Bulatlat.com she has not been able to sleep for the past few weeks. Her son Roger Cariño, 42, left to work for Saudi Arabia in 2000 as a construction worker. But a few months later, she said, her son left his job because his employer reduced his salary and did not give it on time. From then on, Cariño worked part-time for two to three times a week.

He then met Nora, 31, whom he married and they have two children. During the crackdown on migrant workers, Deres said, Cariño wanted to go home. He was even willing to pay $3,660 for his exit papers and airplane tickets. But Cariño had a heart attack and died on April 23, 2013.

Deres said that since then, all she could think of was to have the opportunity to see Cariño’s remains, and meet her daughter-in-law and two grandchildren. But, she said, Nora, who is still stranded in Saudi Arabia, was reportedly told by Philippine consulate officials that, “repatriating remains is not our priority. Our priority is to send home those who are alive.” 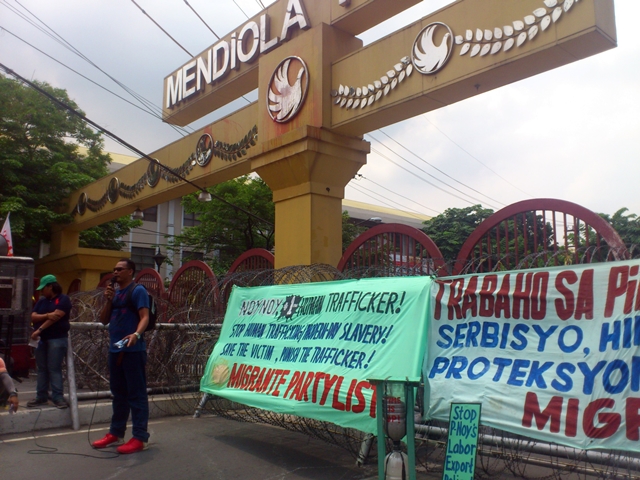 “My tears have run dry. I should not be crying at all. I am old and sick. But what can I do? I went to the DFA (Department of Foreign Affairs). They said they will call in two weeks. But three weeks have already passed and I did not get a single call from them,” Deres said.

During the dialogue, OWWA administrator Carmelita Dimzon clarified that it is not true that their priority is to send home stranded OFWs, adding that they have a separate program to repatriate remains.

Among the primary concerns of Migrante International is the urgent on-site medical assistance for Filipinos residing in the tent cities in Jeddah and in Riyadh. The group said that aside from the crackdown, stranded OFWs are also facing threats of Middle East respiratory syndrome coronavirus (MERs-Cov).

The World Health Organization has received reports of confirmed Mers-Cov cases from countries such as Jordan, Qatar, Saudi Arabia and United Arab Emirates. The WHO said Mers-Cov is a particular strain of coronavirus that has not been previously found among humans. “There is very limited information on transmission, severity and clinical impact with only a small number of cases reported thus far.”

The group is still closely monitoring the situation.

Migrante International, for its part, said this should pressure the government to all the more work on the repatriation of stranded OFWs who are residing in tent cities.

“It is not enough for the Philippine government to just warn OFWs regarding the virus. They have to be more pro-active and deploy medical personnel to attend to the needs of stranded OFWs,” Garry Martinez, chairperson of Migrante International, said.

Stranded OFWs, according to Migrante, have not been receiving enough medical attention even before the reported cases of the said virus. The group said that in one incident, embassy officials even prevented a volunteer medical mission team from entering its compound in Riyadh.

When raised during the dialogue, Dimzon said, the approval of the Saudi government is needed to be able to hold a medical mission. But, she said, the OWWA would look into the matter and tap the help of the Department of Health. She said they might even tap the Filipino medical community in Saudi to help check the medical conditions of stranded OFWs in tent cities.

“They have colds, coughs and some have fever. Unfortunately, the OWWA refuses to allow them to stay in their shelter and does not provide medical assistance to them.”

During the dialogue with OWWA officials, Migrante Partylist chairperson Connie Bragas-Regalado said that if undocumented Filipino workers who were repatriated from Syria and Libya in 2011 were able to get financial assistance from them, workers from Saudi Arabia should also be entitled to the same benefits.

OWWA deputy administrator Josefino Torres said the agency could not easily release money – unless there is a resolution signed by the members of OWWA’s Board of Trustees.

Migrante International is currently waiting for OWWA’s confirmation if they could attend its Board of Trustees’ meeting to ask for financial assistance for repatriated workers from Saudi Arabia.

“As of now, all of the things that the OWWA agreed to are just words and promises. But it is good that we have heard these commitments straight from the officials themselves,” Lyndon Salonga, another OFW repatriated from Saudi, told Bulatlat.com, “We will wait and see if they will be true to their words.”