‘Burgos’: A film about the painful search and inspiring transformation of a mother

How many more mothers would have to shed tears before justice prevails?

“Burgos” is probably the most courageous Filipino film in recent years.

Based on the true story of a closely-knit family, beautifully written by Ricardo Lee, “Burgos” takes the audience to the most important scenes of almost six years of searching for activist Jonas Burgos.

Unlike Joel Lamangan’s indie films in the past years, which are mainly fictional although inspired by real events, such as “Dukot” and “Deadline,” “Burgos” is an honest-to-goodness non-fiction film.

Undoubtedly, the strength of the story lies in the manner how it is told, from the perspective of a mother Mrs. Edita Burgos played by Lorna Tolentino. Her difficult journey exposes not only the hurdles the family has had to face but also her struggles from within.

Mrs. Burgos’s search for the truth about what happened to son Jonas, ably portrayed by Rocco Nacino, led to her reawakening.

During the martial law years, Mrs. Burgos supported her late husband’s fight against the Marcos dictatorship. Jose “Joe” Burgos Jr. could not have been able to publish We Forum and Malaya without the approval and participation of Mrs. Burgos and their children. After Marcos was ousted, the family had taken on a quiet life on their farm in Bulacan. 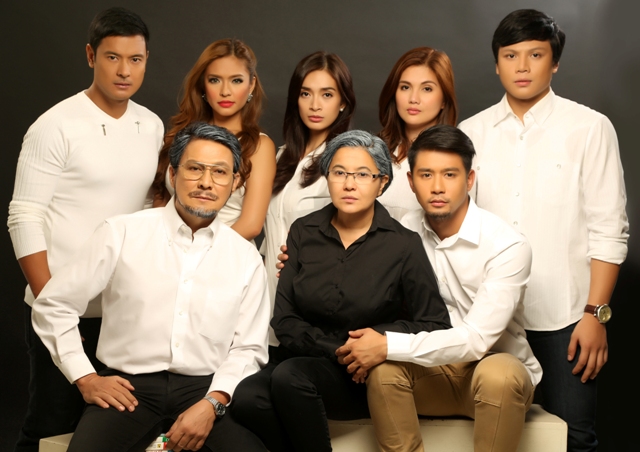 The cast of “Burgos.”(Photo courtesy of Heaven’s Best Entertainment / bulatlat.com)

“Burgos” illustrates how Mrs. Burgos, from being a simple mother and a devout Catholic, has become a human rights defender, how her personal battle led her to take on the battle of others like her — mothers, fathers, sons and daughters — of the disappeared.

It also shows how the military, as an institution, has been covering up the truth. It shows the pain and frustration of the family, especially after military officers involved in the abduction of Jonas were rewarded and promoted under the Aquino administration.

Unlike the usual melodrama characterized by Lamangan’s films, “Burgos” is poignant. There are many scenes that are so powerful one would wish that they lasted a bit longer. The film pierces the heart, opens the mind and bothers the conscience.

At the end of the film, one would realize how amazing and inspiring the Burgos family is. The actors who portrayed Jonas’s siblings — Dimples Romana as Peachy, Allen Dizon as Sonny, Bangs Garcia as Anne and Kerbie Zamora as JL – were all good. Ina Feleo’s performance as the wife of Jonas was equally good.

Proof of their acting power is the reaction of Burgos family members who watched the advanced screening of Burgos for the first time. The eyes of Mrs. Burgos and her children were swollen after seeing the film.

“I thought no tears were left,” Mrs. Burgos told the press at the Bantayog ng mga Bayani. “I knew the story. This is my story…but I consumed a box of Kleenex (tissue).”

Kudos to the producer of “Burgos,” Heaven’s Best Entertainment, for a relevant and quality film.

“Burgos” will be the closing film of Cinemalaya 9. The independent film festival will run from July 26 to Aug. 4 at the Cultural Center of the Philippines with satellite venues at Greenbelt 3, Trinoma and Alabang Town Center.