DAVAO CITY, Philippines— As President Benigno Aquino III presents his State of the Nation Address (SONA) today, Davao residents found little changes in their lives in the past year.

Folks such as Eddie Lopez, a garbage collector whose wrinkled face, thin frame and white hair makes him look older than his age of 47, said nothing has changed for his lot.

“For us, I don’t see any improvement. There are so many people living in hard times now,” says Lopez.

As a collector he saw more poor people lying despondent in the city’s streets, including elderly and children. “Look at Osmeña Park now, there’s so many people sleeping there.” 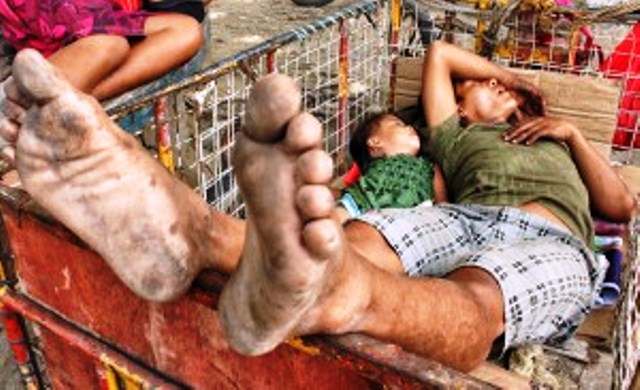 The poverty situation betrayed Aquino’s boast of the country’s 7.8% growth rate the past year.

Gabriela Women Partylist Representative Luzviminda Ilagan said poverty has increased in the country, citing statistics that the number of families who consider themselves poor have consistently increased from 8.9 million at the start of Aquino’s term in 2010 to 10.5 million in 2012.

“The present improvement in the economy is not the work of (Aquino’s) administration but the results of previous efforts. Fundamentals do not happen overnight,” said Stephen Antig, executive director Philippine Banana Growers and Exporters Association.

Amado So of the Davao Chinatown Development Foundation was more blunt, saying “(T)he growth only favors his allies and contributors from the business sector. I think only the business process outsourcing (BPO) have grown and this only benefits the youth.”

So said the business community wants the President to address more important industries such as manufacturing which would generate more jobs and income.

For Dodong Basilio, head of Kilusang Mayo Uno Davao Region, Aquino has not done anything to alleviate workers’ woes, “The bill asking for 125 pesos wage increase was rejected. Contracutalization continues while prices are inflationary.”

Domingo Ang, chairman Philippine Export 11 said the economic growth should address the country’s problem of poverty. “At the end of the day the benefit should be to the SME (Small and Medium Enterprises) and to masses to ironically alleviate poverty in this country of plenty.”

Ilagan said inflation has made life difficult for the poor. “The price of rice has gone up by 2 pesos per kilo. The prices of diesel and gasoline have gone up by at least 8 pesos since Aquino held office in 2010.”

A jeepney driver, Roselle Fernandez, complained that frequent oil price hikes affect his earnings. “They rolled back gasoline for 50 cents, but they will double it next time around. What’s going on?” he lamented.

Rep. Ilagan noted that “Researches indicate a 4.3% inflation rate in the cost of public utilities while a 2.6% inflation rate was posted for the cost of food and basic commodities in the past three years of the Aquino administration. This has made it extremely difficult for poor Filipino families to cope. With high prices of goods, more people are hungry, more people are suffering!”

Aquino’s Conditional Cash Transfer program that was supposed to reduce poverty incidence, also got the flak.

“Instead of prioritizing food, CCT is intended for education. But since families have no they will spend it to buy rice and for transport fare for the children,” said women urban poor leader Corazon Espinoza from Samakana.

Aquino raised the CCT budget from P19 billion in 2010 to P39 billion in 2011 and again to P45 billion this year; but people criticized this for not addressing basic problems.

Davao’s youth such as Baian Lindo-Valdez, a graduate of Masters in Applied Social Research, found the CCT a “band-aid solution which does not alleviate poverty.”

Kit Frias, editor in chief of the University of the Philippines Mindanao publication Himati, told Aquino to “teach them to fish, not to take dole outs. Do not underestimate your people.”

Farmer leader Malen Uyanguren complains that CCT is being used to discourage people from criticizing the administration.

“They are using CCT to dismantle our organizations in the farms, because they will remove our members if they join rallies or if they fail to attend meetings. There are so many requirements,” said Uyanguren.

Davao folks are also wary of Aquino’s private-public partnership as it is threatening to privatize social services. Consumers and members of Daneco have formed a Save Daneco Movement (SADAMO) to protest Aquino’s law that wrests their hold of the cooperative and allows the entry of the private power firm Aboitiz Company to take over.

Likewise consumers and workers of the Davao City Water District are opposing moves by Aboitiz to take over the water utility company.

Malen Uyanguren is worried of moves to privatize Davao’s public hospital Southern Philippine Medical Center. “We farmers will go to SPMC for treatment. Now where will we go if we can’t afford the cost of hospitalization?”

Lindo-Valdez said this is forcing the issue of “”Quality’ of needs at the cost of the access and the right of such need. The government becomes inutile and lackey-yes-men-salesmen for the private sector instead of serving its people.”

“There’s a fine line between growth and development, and what we need is the latter. Although such development does not happen over time, there should have been at least a few changes for the good. Pero wala eh. (But there’s none),” said Lindo-Valdez.

“He needs to give clear cut plans and not motherhood statements,” said Antig.

“Many cases remain unsolved, especially those affecting the poor like the Maguindanao Massacre, because the culprits are rich. There’s still no justice even when the evidence is glaring. He’s the president; he should do something about it,” Bintia said.

For Daisy Jane Banugan, a former reporter and now councilor in Caraga, Davao Oriental, she wanted the president to act “on corruption especially in LGUs since there are still corruption cases in the ombudsman that are not yet resolved.”

She also wanted to know the president’s agenda on the indigenous peoples or Mindanao Lumads whose ancestral land have been threatened by large-scale mining, logging and militarization, which is an issue in her community.

“It’s nice to hear sweet words, but we would like to see actions. Words are useless without action,” says Bintia.

Perper Cagula of Kabataan Partylist said “In three years, there is enough to know what Aquino’s speech would be about. Aquino has done nothing, he has deprived us of our right to education. Thus, in this SONA, the youth have no illusions of change.”