Against the 156 processed Certificate of Ancestral Domain Titles, of which only 37 were registered, the National Commission on Indigenous Peoples issued a total of 320 certifications allowing mining operations. 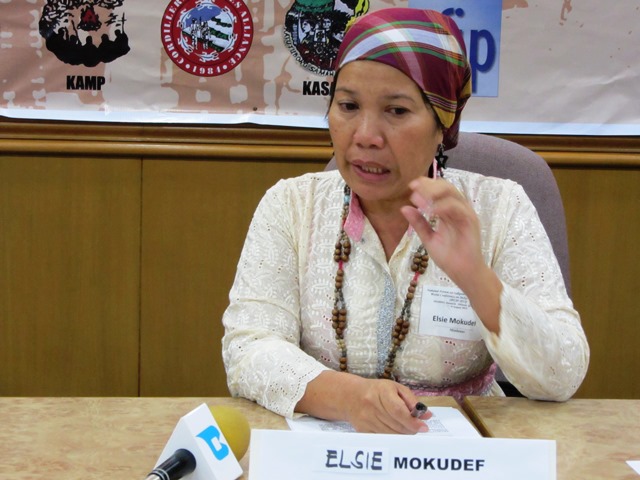 This year, they “updated” the Filipino indigenous peoples’ agenda as they tackled the hindrances to their asserting their right to self-determination and their right to practice it in their own territories.

For the Teduray to enjoy these rights, Mokudef said, they are calling for an “autonomy within an autonomy.” The Teduray tribe lives within the Autonomous Region of Muslim Mindanao. Mokudef said that while the Aquino government is in talks with representatives of the Moro Islamic Liberation Front, they, who also should have a say in how their territories would be governed, are left out not just in the talks, but also in the delivery of social services. Mokudef said their tribe also often gets caught in the crossfire during armed clashes between Moro rebels and government troops.

For most of the other tribes from the Cordilleras in Luzon to Kalumaran of Mindanao, asserting their right to self-determination and to their territories necessitates opposing “development aggression” brought onto their lands by government-backed mining activities, expansion of large plantations, construction of power projects such as dams and power plants, eco-tourism projects, massive land-use conversion for bio-fuels, use of unsustainable mono crops, to name some of it.

In mining projects alone, more than half of designated mining areas cover territories of indigenous peoples. Into these lands, the Aquino government has deployed more soldiers, which it calls as “Investment Defense Forces.” Its tasks is chiefly to protect the operation of foreign mining companies. Under mining Executive Order 79, foreign mining companies are given preferential treatment over small-scale Filipino operators as the former further expand their operations.

“We are losing our lands to land grabbers,” Mokudef said. Three years into the Aquino presidency, indigenous leaders said the government has practically snubbed the agenda they submitted during the early years of its term. Save from seeking to cover indigenous peoples in the government’s Philhealth program – which cause them difficulties as most of them have no birth registration papers – indigenous peoples remain unsecured in their lands and territories. These, their leaders said, are targets of big mining firms, logging and plantations.

If the end — the implementation of development aggression — spells bad tidings for the land and lives of the indigenous peoples, the means to implement it are just as bad if not worse, based on the statements of indigenous leaders and advocates. Protecting and defending their lands and resources from “landgrabbers”, which include big companies protected by the government, has proved risky for the tribes.

The Kalipunan ng mga Katutubong Mamamayan ng Pilipinas or KAMP said that in the first half of Aquino’s presidency, some 35 indigenous leaders, including 5 indigenous women and 4 children, were killed.

Indigenous peoples reported that not only are they being driven or flushed out of their territories by militarization, violence and deception inflicted by hired “mercenaries” of corporations who come to take over their lands – their tribes are also being torn apart by “development aggression.” And the government led by its agency for the indigenous peoples, the National Commission on Indigenous Peoples (NCIP), even has a hand in it.

The past three years have been worse for indigenous peoples, said Giovanni Reyes, secretary general of Koalisyon ng mga Katutubong Samahan ng Pilipinas (Kasapi). Looking at the NCIP’s performance, he said the last three years were its worst.

In the 14 years of its existence, the NCIP has reportedly processed 156 CADTs (Certificate of Ancestral Domain Titles) covering a total of 4.3 million hectares. “It sounds like a big accomplishment,” said Reyes. But of these, only 37 CADTs were actually registered, he said, and these cover some 936,000 hectares or less than a million hectares. For a CADT to be binding, it has to be registered.

It takes NCIP an average of seven (7) years to process one title, but only a few days to issue certifications allowing mining and dam projects, which displace indigenous peoples and plunder natural resources, Reyes said.

Based on the sharing of Mangyans to Bulatlat.com early this year, the Indigenous Peoples Rights Act (IPRA) Law being upheld by the NCIP also has a basic flaw. The Mining Act of 1995 was enacted ahead of the IPRA Law. As such, claims to ancestral domain have to compete with mining claims that may have already taken precedence for the government.

For whom then is the NCIP, the indigenous leaders asked? Since the implementation of the IPRA Law, the NCIP has issued more certifications approving mining operations than ancestral domain claims. Against the 156 processed Certificate of Ancestral Domain Titles, of which only 37 were registered, the National Commission on Indigenous Peoples issued a total of 320 certifications allowing mining operations, Reyes said.

Indigenous peoples’ groups have also noted cases that show how the IPRA Law is actually violating and not upholding their rights. They said the NCIP’s understanding of IPRA “is different from our customary laws.”

The leaders of indigenous peoples’ groups demanded changes in the NCIP and in the way the Aquino government has been treating them. They vow to officially submit their updated agenda to the Aquino government and Congress, the multilateral bodies based in the Philippines and the World Conference on Indigenous Peoples in 2014, a high-level plenary meeting of the UN General Assembly.

The indigenous people’s leaders chided President Aquino because “in his Sona, IPs are invisible.” 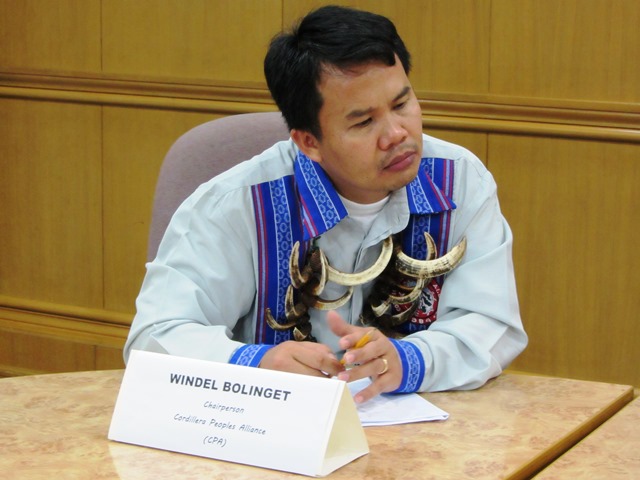 “IPs exist, whether or not the government responds (to the updated IP agenda we are going to submit), or whether or not it shows sincerity to its supposed righteous path,” said Windel Bolinget, chairman of Cordillera Peoples Alliance.

“Our IP agenda should be in the rest of his term. He needs to correct, rectify his programs,” Vicky Corpuz, co-chair of Alta Global Preparatory Conference and executive director of Tebtebba Foundation, said. She added that instead of conducting military operations that result in human rights violations, instead of the forcible implementation of the mining act and executive order 79 down our throats, he should be listening to our agenda.”

“Still, if he does not listen, we would exercise our right to self-determination, and he should not blame us for the ways in which we would act for our self-determination,” Bolinget said. Some indigenous peoples have accepted that to defend their lands and way of life, they may have to be on a collision course with government forces and its current laws.

“We believe we can implement in our own territory our self-determined agenda,” the Indigenous peoples’ leaders said, asserting that most of them still have territories, and their obligation is to protect it not just for themselves but for everybody.