“Public funds are being used to kill the people and perpetrate thousands of rights violations.” – Karapatan

MANILA – Child rights and human rights groups stormed the House of Representatives, Tuesday, Sept. 3, during the hearing of the Committee of Appropriations on the proposed 2014 budget of the Department of National Defense (DND). The groups protested against the proposed P123.1 billion ($2.760 billion) budget for the defense department.

The Salinlahi Alliance for Children’s Concerns, together with other organizations, called on legislators to closely examine the proposed budget of the DND. Kharlo Manano, acting secretary general of Salinlahi said the budget allocated to the DND would be used to further perpetuate human rights violations and atrocities against children.

“We do not want our hard-earned taxpayers’ money to be put towards the acquisition of firearms and ammunitions to be used to claim the lives of children and their families,” he said.

The group demanded for an assessment of the human rights record of the Armed Forces of the Philippines before the House approves the defense department’s proposed budget.

“We ask our representatives to study and assess the record on human rights violations of the AFP first before they decide to appropriate even a single cent to the department,” Manano stressed.

The group cited its data that shows the AFP as a consistent perpetrator of child rights violations. As per documentation of the Children’s Rehabilitation Center (CRC), a Salinlahi member organization, there were 7,060 children victims of human rights violations from July 2010 to April 2103. The violations against children include extrajudicial killings, frustrated killings, illegal arrest and detention, rape, branding of children as child soldiers and forced evacuation. “These atrocities continue to happen because of the government’s counterinsurgency program Oplan Bayanihan,” Manano said.

Many victims of human rights violations are from rural communities, said Manano. “Under Oplan Bayanihan, state military forces are deployed in communities where there are mining operations and other extractive industries to silence resistance from the people. Children are also targets of these vicious attacks against the people.”

On Aug. 23 a minor Victor Freay, 16 years old, was killed in sitio Bulol, barangay Kimlawis, Kiblawan town. According to Davao Today’s report, Victor’s father Anting, 60 years old, went out of their house to check why the dogs were barking when elements of the 39th Infantry Battalion and Task Force Kitaco (Kiblawan, Tampakan, Columbio, Malungo) strafed their house. Anting died instantly. Victor, who ran to help his father, was shot 18 times, blowing out his intestines. Anting was a chieftain of the Blaan tribe and was known for his firm opposition against the operations of the Xtrata-SMI Mining Corporation in South Cotabato.

“A single bullet that kills a child is already a grave rights violation, but to pepper his body with eighteen bullets is sadistically inhumane and atrocious. We are saddened at the same time enraged over this incident. Not only did the AFP take the lives of a child and his father, they also left a life-long scar to the survivors. Moreover, incidents such as this wreak terror to the affected communities,” said Jacquiline Ruiz in statement sent to Bulatlat.com. Ruiz is the executive director of the CRC, an NGO that conducts fact-finding missions, psychosocial activities and stress debriefing for children victims of human rights violations.

According to the CRC, the killing of Victor brought the number of children killed by state security forces under the administration of President Benigno S. Aquino III to 17. Last year, the wife and two sons of tribal leader Daguil Capion, were massacred by elements of the 27th Infantry Battalion. The killings of the Capions remain unsolved and the perpetrators remain at large.

Human rights group Karaptan also slammed the more than P82 billion ($1.840 billion) proposed budget of the AFP, which the group called as the Aquino government’s “killing machine” being the primary implementer of Oplan Bayanihan. They called for a “zero budget for the DND.”

Karapatan secretary general Cristina Palabay echoed the people’s clamor to redirect huge amounts of government money “to social services like hospitalization and medical care for the poor and marginalized, education and subsidies to public colleges and universities and, housing facilities so that the people could access the funds directly and benefit from it, instead of ending up either in the pockets of generals or used to bomb communities such as what is happening now in Sagada, Mountain Province.”

Palabay cited the use of MG520 by the Air Force 1st Division’s Strike Wing on Aug. 31 on suspected camps of the New People’s Army (NPA), destroying communal hunting grounds, farms and, water sources near rice fields and communities.

“Public funds are being used to kill the people and perpetrate thousands of rights violations. Under Aquino’s counter-insurgency program Oplan Bayanihan, Karapatan has documented and recorded 142 cases of extrajudicial killings and 164 cases of frustrated killings, 16 incidents of enforced disappearance, 76 cases of torture, 540 cases of illegal arrests, and more than 30,000 victims of forced evacuation,” Palabay said.

Palabay also slammed the allocation of P2 billion ($45 million) for the compensation of the Civilian Armed Force Geographical Units (CAFGUs), which is included in the DND budget, despite the wide and persistent clamor for the disbandment of paramilitary groups, civilian volunteer organizations and private armies. She also said the European Parliament and several states have called on the Philippine government to immediately disband all paramilitary groups during the Universal Periodic Review conducted by the United Nations Human Rights Council in 2012.

Palabay said Karapatan also documented several extrajudicial killings and human rights violations since 2010 involving paramilitary groups, such as the killings of Datu Jimmy Liguyon, Fr. Fausto Tentorio, and the massacre of Juvy Capion and her two children. “Similarly, the operations of the Special CAFGU Active Auxiliary (SCAA) units, which are co-funded and organized by the AFP and mining/transnational corporations, have continued, with Pres. Aquino categorically giving the go-signal for it on October 20, 2011. The question then is why are we still funding CAFGUs and SCAAs?” she asked. 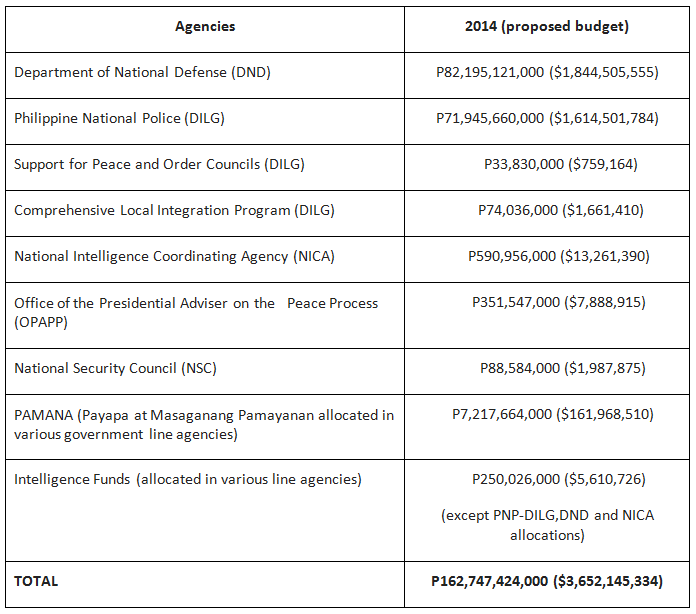 Palabay explained the inclusion of the proposed budgets of the National Intelligence Coordinating Agency (NICA), Office of the Presidential Adviser on the Peace Process (OPAPP), National Security Council (NSC) and of some specific projects as in the case of PAMANA or Payapa at Masaganang Pamayanan in the overall budget of Oplan Bayanihan “because these agencies and programs are conduits in the implementation of Oplan Bayanihan’s components, specifically the psychological warfare and intelligence aspects.”

The groups demanded that the budget allocated for the counterinsurgency program be rechanneled toward ensuring the provision and delivery of basic social services, which would benefit the marginalized.

Manano said that for as long as the government does not heed their calls, cases of human rights violations would continue. “There will be more cases of military deployments in civilian communities, more children will be killed, more schools will be turned into military barracks, and more children will be falsely branded as child soldiers in the name of their malicious propaganda and so on. The culture of impunity will continue to prevail as more children will suffer,” Manano said.

Palabay said the Filipino people deserve better than a government that is repressive and corrupt.

“It is the people’s right to have access to health services, to medical attention, to attend school and to better education and, to decent housing at the very least. We can no longer tolerate a government that has nothing to offer the people but press release spins and catchphrases of goodwill while violating the people’s rights.”