You Are Here: Home → 2013 → December → 11 → Typhoon damaged state universities to get slashed budgets

“It would be a double blow for typhoon-ravaged schools if these impending budget cuts push through. The cuts are particularly lethal, as the government will not provide any capital outlay for the said schools. How will they rebuild damaged buildings without a single cent in their infrastructure budget?” – Kabataan Rep. Terry Ridon

MANILA – Kabataan Rep. Terry Ridon expressed concern over the fate of devastated state universities and colleges (SUCs) in the Visayas Region. According to Rep. Ridon, most of the SUCs that were badly hit by super typhoon Yolanda last Nov. 8 will also suffer budget cuts in 2014, citing the approved 2014 national budget.

“During the congressional hearings on the 2014 national budget, we have already pointed out that 79 out of 110 SUCs will suffer another wave of budget cuts next year. When we reviewed the data, we found out that most of the SUCs that will suffer reductions in their budget are in fact schools ravaged by Typhoon Yolanda,” Ridon said.

The youth solon said at least 11 SUCs in Regions VI, VII and VIII suffered massive damages due to typhoon and are also set to suffer budget cuts in 2014: 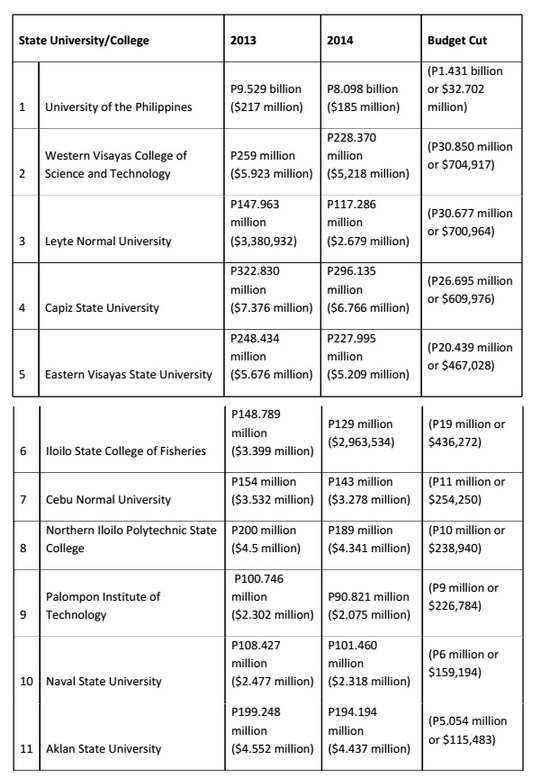 He added that 11 severely damaged SUCs also do not have allocation for capital outlay for the next academic year. It includes the UP System, whose Tacloban campus was totally wrecked by the super typhoon. 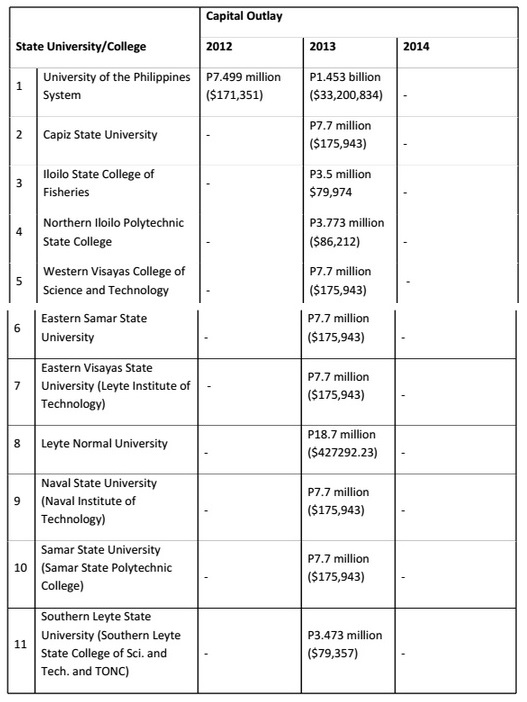 “It would be a double blow for typhoon-ravaged schools if these impending budget cuts push through. The cuts are particularly lethal, as the government will not provide any capital outlay for the said schools. How will they rebuild damaged buildings without a single cent in their infrastructure budget?” Ridon said.

The massive devastation of SUCs should not have happened in the first place, Ridon pointed out, only if the budget for SUCs have not been slashed over the years. “We also have to take into consideration the fact that for years, the government has underfunded the infrastructure development of many of these schools in Visayas, leading to low-quality buildings and infrastructure that can be easily toppled by storms.”

He added, “Our national government will not be stuck in a bind like this if, in the first place, adequate funding is allotted to all of our SUCs. Yet year after year, SUCs and other basic services still sustain massive cuts, despite the repeated call of the people. Ultimately, this just goes to show how President Benigno S. Aquino III’s administration disregards the welfare of students and the people – a dangerous attitude that could easily be amplified by disasters.”

Meanwhile, there are five devastated SUCs that have been provided funding for capital outlay. However, Ridon noted that the budget for 2014 is lower than the capital outlay budget that SUCs received for 2013. 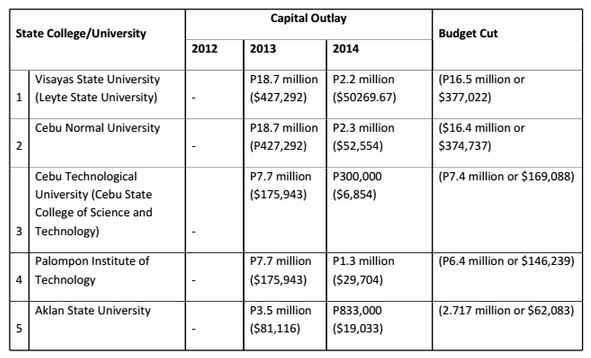 “Both Houses of Congress must address this issue at the soonest. We should not pass a budget that cuts the funding for SUCs that have sustained massive damages from typhoon Yolanda.”

The young law maker called on the leadership of both Houses to recall the 2014 budget and make necessary adjustments – not just for SUCs damaged by Yolanda but for all SUCs with pending cuts in their budget. He said that additional funds through a supplemental budget might not be enough for the damaged SUCs.

Ridon also called on Congress to pass House Bill 354, a bill that seeks a three year moratorium on tuition fee increase filed by the Makabayan bloc last July. The bill seeks to prohibit tuition and other fee increases in schools that have registered profits in the previous year.

“Now more than ever, we need to enact a three-year tuition moratorium law to provide immediate relief to our people, especially as effects of the aftermath of typhoon Yolanda will have a great impact on prices of basic commodities,” Ridon said.