“It is simply callous and insensitive for big business and the government to connive and bring forth this pestilence to the people just weeks after our nation suffered from Typhoon Yolanda, and mere days before Christmas.” – Kabataan Rep. Terry Ridon

MANILA – “Nganga” is how Lani Budna describes her family’s Christmas. With the approved increase in power rates of P4.16 ($.09) per kilowatt-hour (kWh), Budna said, she doesn’t know how they will celebrate Christmas at all. Nganga is a Tagalog word that is used to describe nothing or empty.

The Energy Regulatory Commission (ERC) has approved the biggest increase in power rates on Dec. 9, which will soon reflect on consumers’ electricity bill starting this month up to March 2014.

To supposedly cushion the effect to consumers, Meralco said the increase in generation charge and other charges including transmission charges, taxes and other components will be staggered. Starting this month, the power rate will jump by P2.41 ($.05) per kWh in December, P1.21 ($.03) per kWh in February and P0.54 ($.01) in March.

But many groups believe that staggered or not, the said increase is a big burden for a family like Budna’s, a housewife who has five children and a husband who only earns about P400 ($9.13) a day. “Even if this increase is staggered or implemented one time it is still a heavy burden for mothers especially when there is no significant increase in wages and the poor barely have a job,” said Misty 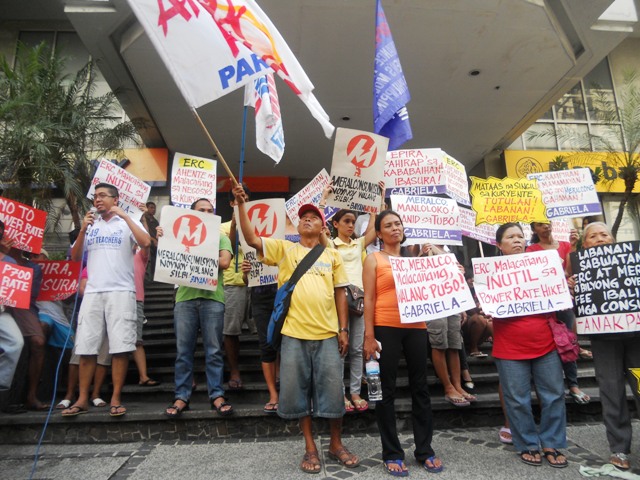 Lorin, deputy secretary general of women’s group Gabriela who stormed the ERC office on Dec. 9 while Meralco and ERC conduct its consultation.

But even with the strong protest by many groups and testimonies of consumers from poor or the working class that this increase will greatly affect their budget, from food, transportation allowances, daily expenses such as snacks for children going to school, payment for other utilities, house rent among others – the ERC still approved the Meralco’s demand to increase charges in power rates.

‘ERC, a rubberstamp of Meralco and power producers’

“I am disappointed with the ERC because it has become a mere rubberstamp of Meralco and power producers instead of defending the rights of consumers by immediately stopping the power rate hike,” said Bayan Muna Rep. Carlos Zarate during the hearing on power rate hike in Congress on Dec. 10.

Anakpawis Party-list national president Rafael Mariano said the ERC has become a stamp pad of power producers as it justifies power rates. “It has no consideration on its adverse effects particularly on ordinary residents and small to medium level business operators. Their measly income and wages will be only spent for the payment of their electric bill.”

Anakpawis Rep. Fernando Hicap also said the ERC acts fast on approving power hikes but slow to mitigate the burden of the high cost of electricity to the consumers. “Meralco has the gall of grinding more profits to its consumers while it has a standing debt to pay for double-charging. This attitude of Meralco is not anymore surprising as it has ERC’s direct and indirect approval by not chasing after its rampant profiteering and numerous abuses to its clients,” Hicap said.

Zarate also lambasted the Department of Energy (DOE), “The DOE is equally appalling because it has no functional energy plan until now. Yet, even if there are already indications that there is an apparent cartelization in the electric power sector, no serious efforts have been done by the DOE to break its control and end the sufferings of our overburdened consumers.”

Independent think tank Ibon Foundation said the supposed tight energy supply is only artificial. In its statement, the group said the public would have been spared from the increase if only the government did not give up its control over energy development to profit-oriented private business.

Ibon argued that the power supply problem could have been prevented if the maintenance shutdown of the country’s energy sources and power plants were effectively controlled by government. “But because it relies too heavily on private business, government has no handle in determining the maintenance schedule of power plants in a way that ensures energy security and protects public interest. This makes the public vulnerable to possible manipulation of supply to bloat power rates.”

Meralco said the shutdown of Malampaya and other power plants forced it to buy from the Wholesale Electricity Spot Market (WESM) where electricity is being sold at a higher price. But Ibon noted that the private investors who control the power plants are the same investors that dominate the WESM.

“Thus, it raises a legitimate suspicion that the simultaneous maintenance shutdown of the power plants could have been staged to raise demand for volatile WESM power.”

The group explained that the maintenance shutdown of Malampaya started on November 11, the same date that President Aquino put the country under a state of calamity because of Yolanda. “Energy officials already knew then that it will trigger a big spike in power rates. At that time, energy supply in Luzon was already tight due to a series of maintenance shutdowns of major power plants. But instead of ensuring that Malampaya will remain operational, especially in a state of national calamity, the government’s response was lacking as the source of 40 percent of Luzon’s power needs was cut off, triggering a new round of huge rate hikes.”

ACT Teachers Party Antonio Tinio said this unprecedented increase has shattered yet another illusion peddled by the advocates of privatization. “WESM was and continues to be touted as a mechanism that would reduce electricity rates by bringing market forces to bear on the price of peak power.”

“The harsh reality is far different: a handful of players can manipulate the market and gouge the public seemingly at will, with the government regulator, ERC, unwilling to intervene,” Tinio said.

Ibon’s survey last October shows 64 percent of Filipinos already find it difficult paying for power and water. They urged Congress to investigate the shutdown of Malampaya and the power plants as well as the WESM to determine if the big power investors are abusing the public through their unhampered control over the energy sector.

‘Lights off on Friday the 13th

Meanwhile, to protest against the impending $.09 kWh increase on power rates, youth groups led by Kabataan Partylist will conduct a mass “lights off” protest this Friday the 13th “We call on every individual and community to turn off the lights on December 13, Friday, between 6:00 p.m. to 6:30 p.m. to oppose the impending $.09 kWh power rate hike that will be implemented on a staggered basis starting this December,” Kabataan Partylist said in an online invitation via change.org.

Kabataan Party-list Rep. Terry Ridon said turning lights off for half an hour is a simple gesture that would enable the 4.7 million Meralco consumers to vent their rage against the exorbitant increase. “Imagine four million households going dark in protest all at the same time. It may be a daunting feat, but no one should underestimate the growing anger of consumers against this new power rate hike.”

The youth solon lamented the fact that huge power rate hikes will lead to higher inflation, as most goods and economic services require power. “Not only will our electricity bills be inflating, but also the price of food, garments and lots of other basic needs. It’s practically economic sabotage,” Ridon said.

“It is simply callous and insensitive for big business and the government to connive and bring forth this pestilence to the people just weeks after our nation suffered from Typhoon Yolanda, and mere days before Christmas, Ridon added.

“The almost five million consumers of Meralco should rise and protest this all time high power hike. No amount of Meralco’s proposed staggered charges will save its consumers from the power hike burden,” Mariano said.