MANILA — Three years after a Bulacan local court issued a warrant of arrest against retired Gen. Jovito Palparan Jr. for the kidnapping of two University of the Philippines (UP) students Karen Empeño and Sherlyn Cadapan, authorities have yet to locate Palparan.

Lorena Santos, secretary general of Desaparecidos, said in a statement, “No one believes the Aquino government’s claim that it is doing everything to catch Palparan…Because if Aquino really had the will, Palparan should have been behind bars today. ”

Desaparecidos is an organization of families of victims of enforced disappearances. Karen Empeño’s mother, Mrs. Concepcion Empeño, is the current chairwoman of the group. 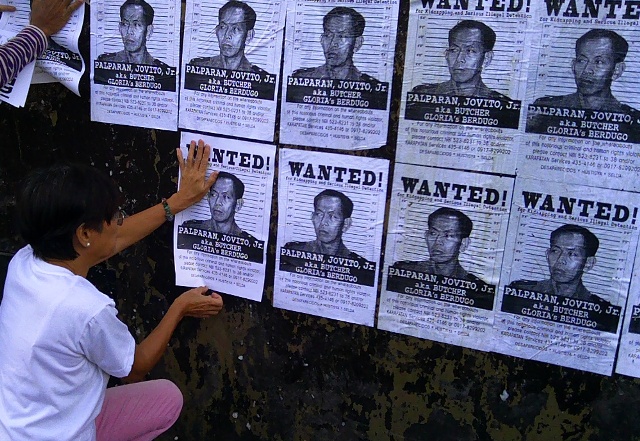 Karen and Sherlyn were abducted on June 26, 2006 in Hagonoy, Bulacan by men believed to be under Palparan’s command.

“For us families of the disappeared, unless and until Palparan is arrested and faces the court, President Aquino becomes part of the cover up to protect the Butcher. He thus, becomes part of the continuing crime of enforced disappearance and should be liable under the Anti-Enforced Disappearance Act,” Santos said further. Butcher is the label used by human rights groups for Palparan.

In December last year, Aquino signed into law Republic Act 10353 or An Act Defining and Penalizing Enforced or Involuntary Disappearance.

The law penalizes those who harbor, conceal or assist in the escape of the principal/s in the act of enforced or involuntary disappearance.

Desaparecidos said Palparan might be in a military camp. “We believe he is hiding with the help of top military officials, who are powerful, to provide sanctuary in their own camps,” Santos said. “We still get persistent reports that Palparan is hiding in one of the largest camps in the Philippines.”

“We dare the BS Aquino government to open all military camps and facilities and surrender Gen. Palparan,” Santos said.

Santos added that even the P2 million ($45 thousand) reward money for the arrest of Palparan is just for show.

A key witness testified in court that Palparan went to one of the camps where the two students were detained. According to the same witness, Palparan’s men tortured and raped the two students.

Palabay noted that Aquino and Interior and Local Government Secretary Mar Roxas “would rather go after the small fish like the ‘martilyo gang’ that recently robbed a mall than to catch and punish butchers like Gen. Jovito Palparan or Pfc. Roderick dela Cruz, one of the suspected killers of Hacienda Luisita farm-worker leader, Ric Ramos.”

Another suspect S/Sgt. Rizal Hilario remains at large. Two others — M/Sgt. Edgardo Osorio and M/Sgt. Felipe Anotado — surrendered to authorities shortly after the issuance of the arrest warrant. Anotado and Osorio are detained at Fort Bonifacio, headquarters of the Philippine Army.