“Compensation should have been for the actual land value of P304 million only, since DAR will not be paying them over a ten-year period as contemplated in the law. Why did DAR pay the Cojuangcos extra for the 10-year cost of money when they were paid outright and in full?” – ACT Teachers’ Rep. Antonio Tinio

The amount is equivalent to P100,000 ($2,223) per hectare or “double the value initially prescribed by the April 24, 2012 Supreme Court decision on Hacienda Luisita,” according to the Alyansa ng Manggagawang Bukid sa Asyenda Luisita (Ambala) and Unyon ng Manggagawa sa Agrikultura (Uma).

In its final ruling, the high court maintained that the date of reckoning for land valuation in Hacienda Luisita shall be November 21, 1989, the same date that the stock distribution option (SDO) in Hacienda Luisita was approved. The SDO is one of the non-land transfer schemes allowed under the Comprehensive Agrarian Reform Program (CARP). To evade actual distribution of the land, the Cojuangco-Aquinos during the administration of the late president Corazon Aquino, the current president’s mother, gave farm workers shares of stocks instead of land. According to Ambala’s lawyer Jobert Pahilga, the 1989 valuation should be pegged at P40,000 ($952) per hectare, the same valuation given by the Cojuangco-Aquinos when they computed the shares of stocks of farm workers under the SDO. The SC affirmed that the valuation should be based on 1989 prices.

“There has been an overpayment of over P167 million to the Cojuangcos,” said ACT Teachers Rep. Antonio Tinio. “Public funds have been used to further enrich the President’s kin.”

Tinio questioned the payment of interest on top of the actual cost of the land based on the 1998 valuation, as mandated by the Supreme Court. His questioning revealed that the P167.46 million ($3.72 million) in interest represented the cash equivalent of matured 10-year Land Bank bonds computed using the prevailing 91-day T-Bill rates from 1989 to 1999. The Comprehensive Agrarian Reform Law allows the payment of 25 percent in cash and the remainder in 10-year Land Bank bonds as a mode of payment of just compensation to landowners. “It appears that the DAR used this as a basis for computing the compensation they paid to the Cojuangcos,” he said. 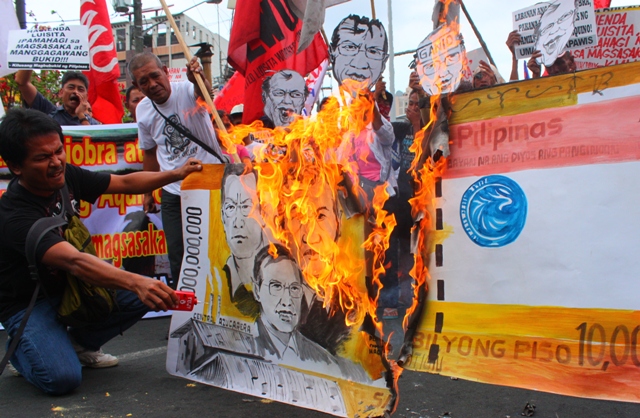 “However, such a formula is grossly disadvantageous to the government and the taxpayers,” Tinio said. “Compensation should have been for the actual land value of P304 million only, since DAR will not be paying them over a ten-year period as contemplated in the law. Why did DAR pay the Cojuangcos extra for the 10-year cost of money when they were paid outright and in full?”

Tinio pointed out that despite the overpayment, the Cojuangcos are still questioning the compensation already paid to them and demanding that the government pays them even more as interest. The HLI filed a complaint before the DAR Adjudication Board (Darab). Tinio added that unofficial computations could see the Cojuangcos’ claim anywhere from P784 million ($17.42 million) to as much as P1.5 billion in compensation ($33.33 million).

In a statement before the Darab, the HLI said that it was “underpaid” and that the amount of P471.5 million ($10.48 million) was “certainly inadequate.”

Mariano said that “it is totally revolting that the Cojuangcos still have the gall to claim that they were underpaid when, in fact, Hacienda Luisita remains undistributed.”

Not a single peso

For Ambala and Uma, the Cojuangco-Aquinos do not deserve even a single-peso payment for Hacienda Luisita.

The groups reminded the public that the Cojuangcos acquired Hacienda Luisita through government loans in 1957 on the very specific condition that, after ten years, the more than 6,000 hectares of land should have already been parceled out to the farmers. “Such condition was obviously never fulfilled. Not in 1967. Not in 1987, when the first Cojuangco-Aquino president put in place the much ballyhooed CARP; nor in the whole length of her term when she ought to have made good her electoral promise not only to the Luisita farmers but to the entire nation,” the farmers said.

“Not only have the Cojuangco-Aquinos enriched themselves from the blood, sweat and tears of generations of Hacienda Luisita sugar farmworkers, they have also piled hefty earnings from sales of portions of this vast Tarlac estate,” Uma and Ambala said. The groups cited the payment of at least P80 million by the government for that part of the Subic-Clark Tarlac Expressway which now cut across Hacienda Luisita.

The farmers also said that there are no indications that the Cojuangco-Aquino clan will abide by the SC order to compensate the farm workers with the P1.33 billion ($29.56 million) proceeds from the sale of 580.51 hectares of land by Hacienda Luisita, Inc. (HLI), and Centenary Holdings (CHI).

What is more revolting, according to Anakpawis Rep. Fernando Hicap is the fact that “while the president and his family enjoys the multimillion-pesos in tax payers’ money paid to them as landowner compensation for Hacienda Luisita, they still continue to maintain the immoral and illegal control over the vast agricultural land.” said Anakpawis party-list representative Fernando Hicap.

Anakpawis claimed that the Cojuangco-Aquinos are using the compensation money to prevent the actual land distribution of the disputed landholding to its 6,212 beneficiaries.

Hicap said the Tarlac Development Corporation (Tadeco) owned by the Cojuangco-Aquinos have filed trumped-up charges against farmer-beneficiaries, bulldozed and fenced agricultural lands in Barangay village and deployed security guards, military and police forces to quell the struggle of Luisita farmers.