One billion rise for justice

“The three issues of injustices namely, Aquino’s criminal neglect of victims of calamities, his neo-liberal policies that result in high prices of basic goods and utilities, and government’s unabated corruption, served to further push women and their families deeper into the quagmire of poverty.” – Joms Salvador, Gabriela

MANILA – Thousands of women rose and called for justice on Valentines’ Day, Feb. 14 during the culmination of the One Billion Rising for Justice campaign this year.

Last year’s One Billion Rising was a protest against violence against women and children. This year, the campaign was a call for justice.

A dance protest was held in the morning at the Chino Roces Bridge (former Mendiola Bridge) in Manila participated in by members of Gabriela and Kilusang Mayo Uno (KMU). The protest dance highlighted three issues of injustices under the government of President Beningo S. Aquino III. Theater actress Monique Wilson, director of One Billion Rising, joined the protest activity at Mendiola.

“The three issues of injustices namely, Aquino’s criminal neglect of victims of calamities, his neo-liberal policies that result in high prices of basic goods and utilities, and government’s unabated corruption, served to further push women and their families deeper into the quagmire of poverty,” said Joms Salvador, secretary general of Gabriela. 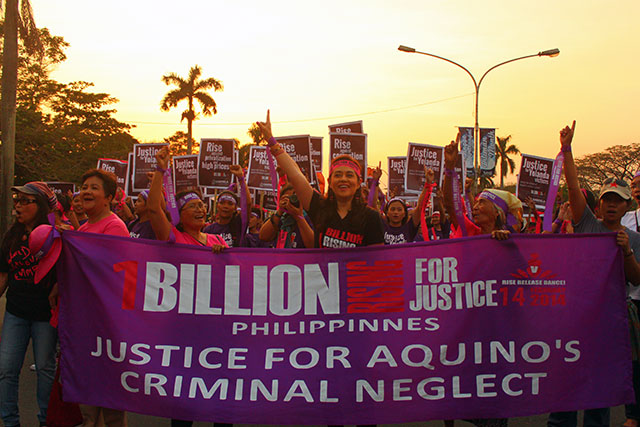 In the late afternoon, women marched from the National Housing Authority along Elliptical Road in Quezon City to the University of the Philippines – Diliman campus where a program was held. A contingent of youth and students also held a One Billion Rising for Justice activity at Morayta, Manila where they called for justice, an end to violence against women and for the democratic right to education and other social services.

Salvador said Aquino’s reign proved to be the most disaster-stricken, literally and figuratively. They dubbed Aquino as “disaster President.”

“Supertyphoons, earthquake, storm surges, name it and it happened in the three years of the Aquino’s presidency. But what is most disastrous is the fact that his government does not care about the people’s welfare and continues to implement policies that further worsen the effects of natural calamities,” said Salvador.

“The miserable conditions of women and children in Eastern Visayas have worsened since supertyphoon Yolanda ravaged the region. Thousands of women and children have lost their lives as a result of the criminal negligence of the Aquino government in ensuring the safety and welfare of the victims,” said Jessica Darantinao, 24, a typhoon survivor from Carigara, Leyte. 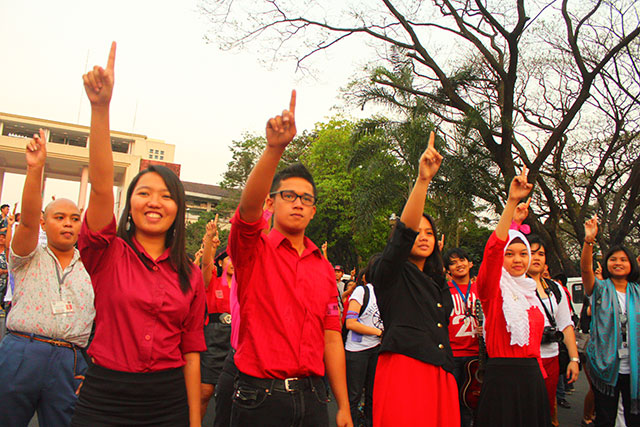 Darantinao is a typhoon victim and a member of People Surge, an organization of survivors of typhoon Yolanda. She said the government’s utter disregard for the victims’ plight buries the victims deeper in poverty, hunger and debt.

Gabriela Women’s Party Rep. Luz Ilagan said that after three months since typhoon Yolanda struck the country, there is still no improvement in the lives of the survivors. “Instead of providing them sturdy shelters, the government built overpriced and substandard bunkhouses. Instead of providing sustainable jobs, victims have to rely on cash dole outs. Instead of ensuring the safety of women and children, human and sex trafficking have surfaced. Indeed, injustices hound the already injustice-ridden areas. We are, therefore, rising for the victims of Yolanda. We are seeking justice and for their immediate rehabilitation and recovery.”

The One Billion Rising for Justice program at UP also paid tribute to the women who staunchly fought for social justice. Those women who were killed fighting for justice include Lorena Barros and Cristina Jose to name a few as well as Kalipunan ng Damayang Mahihirap or Kadamay’s chairwoman emeritus Carmen “Nanay Mameng” Deunida.

Different sectors danced to the beat of “Bangon!” (Rise!), the Philippines’ theme for One Billion Rising and the global event anthem “Break the Chain.”

Salvador said the One Billion Rising for Justice serves as a fitting vehicle for Gabriela to mobilize thousands of women to act against injustices, through the form of dance-protest. “Dance, as a form of expression is already liberating. Dancing in the streets as a form of protest brings it to a higher level. It encourages women who are too afraid to join rallies and protest actions.” 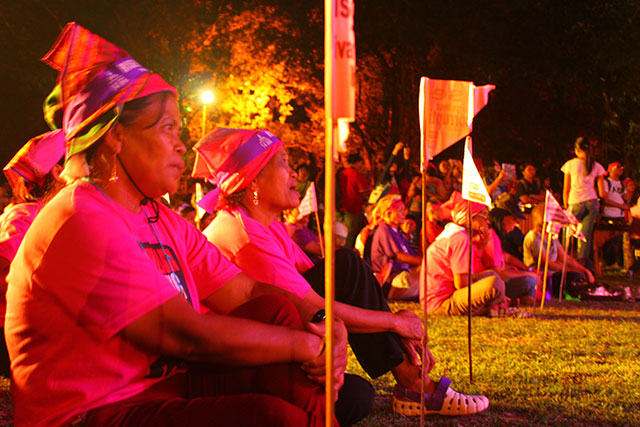 According to Gabriela, dance protests were held in front of various government agencies and business headquarters, which cause the repression and injustice borne by women such as mining companies and agribusiness plantations in Mindanao, to decry the plunder of resources and destruction of the environment. The women also directed their dance protests at the Malacañang Palace to demand for lower electricity rates and prices of basic goods and services, for justice for Yolanda victims and to put a stop to government corruption.

One Billion Rising dance protests were simultaneously held at Davao City, Baguio City, Bacolod City, Legazpi City, Naga City and Manila. The same activity was also conducted in 207 countries around the globe.
Wilson said the rising will go beyond Feb. 14 and will culminate on International Women’s Day on March 8. This year’s March 8 commemoration will center on Aquino’s accountability for women’s sufferings.