You Are Here: Home → 2014 → February → 27 → Injured Yolanda victims confined in Manila not receiving any assistance

Injured Yolanda victims confined in Manila not receiving any assistance

“Because of the POC modernization, we are being asked to leave the hospital even if the medical treatment has not yet been completed.”

MANILA – Maria Nida Permeo could not help but cry during the protest action in front of the Supreme Court on Monday, Feb. 24 while Wilson Cecero, 22, is sharing the plight of poor patients at the Philippine Orthopedic Center (POC). Cecero’s mother and Permeo’s son are confined at the spinal ward of the POC since last Nov. 16, 2013.

Permeo’s son could no longer move because of his spinal injury and so is Cecero’s mother.

“The news said the government through Philhealth will shoulder all the medical expenses of the injured patients due to typhoon Yolanda. Who are they fooling?” Cecero said adding that it never happened.

Permeo is from Dulag, Leyte and Cecero is from Basey, Samar. Their houses were swept away by the typhoon. 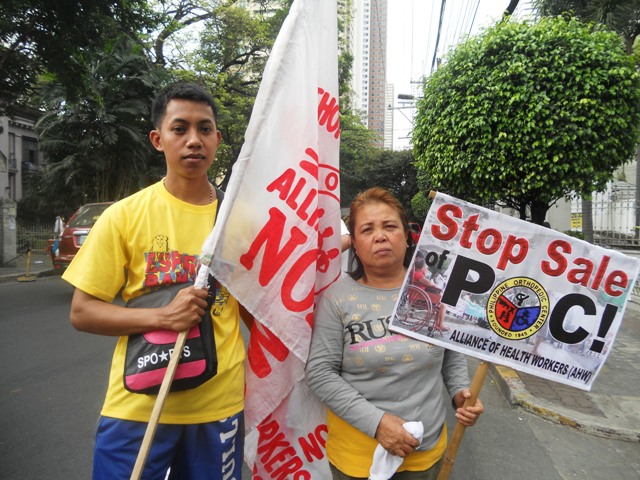 Permeo is with her husband at the POC to take care of their son. They were not able to bring anything with them, no belongings and not a single centavo. Cecero is with his parents and some relatives. They too have nothing. They just flew in to Manila after the typhoon because of their patients. Permeo and her husband live mostly in the hospital while Cecero is temporarily living with his father’s employer.

“I don’t have clothes. This (clothes) was just given to us by other patients’ companions,” said Permeo.

Permeo and Cecero joined the protest action at the Supreme Court on Monday, Feb. 24 asking the high court to issue a Temporary Restraining Order (TRO) against the modernization of the POC.

Cecero said they don’t know what to do with their situation. He said they are not receiving help from the government. He tried to ask for assistance from the Philippine National Red Cross so that somehow they would have something for their basic needs. “But I was told that they are not giving relief assistance to those who are here in Manila. Their priority is those who are in the provinces,” Cecero told Bulatlat.com in an interview.

Cecero said all the Yolanda victims who have been confined at the Philippine Orthopedic Center are now being asked to leave the hospital. “Because of the POC modernization, we are being asked to leave the hospital even if the medical treatment has not yet been completed. We heard that if we still want to stay, we have to pay P500 ($11) a day in the new POC. Where will we get the money? We are victims and all our belongings and livelihood were destroyed,” Cecero lamented. “If there is only a hospital like the POC in our province, we should not have come here,” he added.

The new POC will be built in the National Kidney Institute compound at East Avenue, Quezon City. According to Public-Private Partnership Center, the construction of the new POC will begin on the last quarter of this year.

In the hospital, they were given food by the companions of other patients. “We have no money to buy food. The others just share what they have,” said Permeo.

No help from the government

Cecero also tried to ask help from the Department of Social Welfare of Development (DSWD) but to no avail. “I keep on coming back to the DSWD but they are not heeding our plea.”

Cecero said they also asked for a wheelchair, but the Social Services Department of the POC is still waiting for a donation. “We have to wait for someone to donate a wheelchair but up to now no donations are forthcoming. The government could not even provide for that to the victims of Yolanda.” Cecero said her mother needed a wheelchair that supports her nape.

“What we’re asking for is just a wheel chair. My son badly needs it,” said Permeo who is emotional all throughout the interview with Bulatlat.com. She said they could not bring home their son without the wheelchair. “We are living in the mountains in our province. In the town proper we have to ride a tricycle and then we have to walk at least three kilometers before we can get home. How can I bring him home without a wheelchair? My husband and I cannot carry him.” Some patients, according to Cecero have gone home.

Since Cecero, Permeo, and their injured relatives and other victims of Yolanda are not getting the much needed help, they could only hope that the modernization project of the POC would not push through. “Please, have compassion especially to those who are victims of Yolanda,” said Cecero during the protest action.

“Please Chief Justice (Lourdes Sereno), even if you were appointed by the President (Benigno S. Aquino III) we hope that you will base your decision on the needs of the people. In the long term, only public hospitals are accessible to the poor majority,” he added.