“In other countries, proper disaster risk reduction and management has made a difference, regardless of the strength of the storm or any other natural hazard. For example in Vietnam, only six people died when Yolanda struck there, in part because of the preparations.” – Vencer Crisostomo, Anakbayan

MANILA – To this day the stench of death still pervades Leyte province. There is few reconstruction going on and some roads are still unrepaired. Subsequent typhoons after Yolanda piled more landslides and rocks by the highway, but, as a Leyte resident told Bulatlat.com, when the resulting deaths are fewer than the feared 10,000 caused by Yolanda, the next typhoon’s death toll did not get as much notice.

It has been four months since the strongest typhoon to make landfall struck this country, yet, it is only now that the country’s president has uttered a word of apology about the slow government response. His administration’s “criminal neglect,” critics said, had been evident from the preparations to the aftermath of the supertyphoon. Aquino’s social welfare secretary finally agreed to meet with the survivors who have come all the way from the devastated region to bring the survivors’ demands to the national government only this week.

But leaders and some members of the organization of Yolanda survivors, the People Surge, have so far encountered only scorn and insult, mistrust, and the run-around from the Aquino administration.

After a seemingly fruitless dialogue with Social Welfare Secretary Dinky Soliman, members of People Surge accompanied the two Gabriela Women’s Party legislators to file a resolution at the House of Representatives urging the Aquino administration to grant the demand of P40,000 ($888) immediate financial assistance to 3.4 million families affected by typhoon Yolanda.

People Surge said the Aquino administration appears callous to their being homeless, jobless and starving as evidenced by the government’s relief distribution system that continues to be snail-paced, unsystematic and inadequate. The super-typhoon destroyed even the root crops they depend on for the coming dry months, leaving them with nothing to harvest and eat. Before the 100th day of Yolanda, they have warned that without active support, they who survived Yolanda may die by hunger.

The typhoon survivors said that in the past, the second quarter of the year is usually lean season, and now, Yolanda has made their situation even more precarious.

People Surge had petitioned the Aquino government for a P40,000 ($888) immediate financial relief to approximately 3.4 million families affected by the typhoon. Their petition, signed by at least 17,000 individuals, was personally delivered by their leaders to the President in Malacañang. But they were ignored and were even castigated before the media by no less than the President. From their computations, the survivors said P40,000 is the bare minimum they need to rebuild a basic house for their families and buy food for the lean months.

Apology as a PR stunt?

In a statement, the progressive labor center Kilusang mayo Uno (KMU) said Aquino’s apology, more than being late, is also insincere as “it is surrounded by attempts to justify his government’s late response.” Members of KMU trooped to Mendiola to demand for Aquino’s resignation. The KMU called Aquino a disaster president. The KMU said the number of people who died because of the super typhoon and his criminal neglect warrants not merely an apology but no less than his immediate resignation. 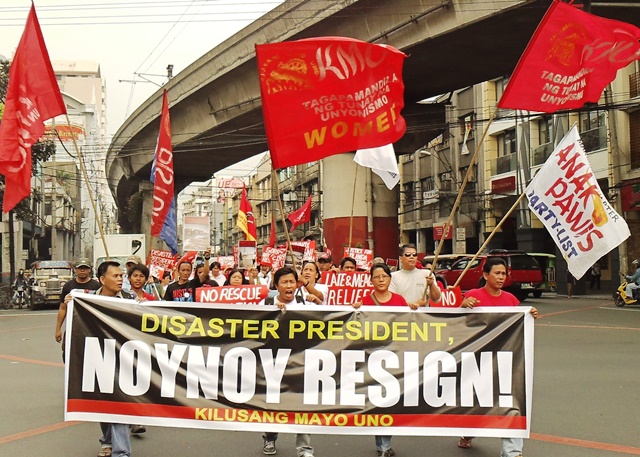 “Aquino’s apology brings to mind Gloria Macapagal-Arroyo’s ‘I am sorry’ speech in the aftermath of the ‘Hello Garci’ electoral fraud scandal,” said Elmer “Bong” Labog, chairman of KMU. He said both apologies highlight the chief executive’s crimes and their desperate attempt to dampen growing condemnation of their crimes.

The Aquino government’s late response to super typhoon Yolanda is being condemned in many quarters as part of its criminal responsibility for the death of more than 10,000 Filipinos in the Visayas. “The Aquino government failed to conduct massive evacuation before the super typhoon hit and it failed to carry out rescue operations immediately after. The relief operations it did carry out were late, grossly insufficient and constitute an insult to Yolanda’s victims,” Labog said.

Vencer Crisostomo, national chairperson of Anakbayan, said Aquino’s apology is ‘disgusting’ as it continued to insist that the government could not have done anything to either lessen the impact of Yolanda, or prepare a quicker disaster response to typhoon-stricken areas.

“Time and time again, our president exhibits complete and total ignorance. In other countries, proper disaster risk reduction and management has made a difference, regardless of the strength of the storm or any other natural hazard. For example in Vietnam, only six people died when Yolanda struck there, in part because of the preparations” said the youth leader.

“We cannot afford to have a president who does not understand something as basic as disaster risk reduction, especially as around 20 typhoons hit our country yearly. Aquino is a separate disaster in itself” said Crisostomo.

In Congress, party-list group Anakpawis urged local and international aid donors to push the Aquino administration to act on reports that the Department of Social Welfare and Development let some relief goods to get spoiled before being distributed.

“Letting relief goods rot instead of giving it to Yolanda survivors only shows Ms. Soliman’s disrespect and unappreciative attitude to the efforts of all those who extend their hands to help Yolanda survivors live for another day. We should not let this pass; the DSWD secretary should be immediately investigated,” said Anakpawis party-list Representative Fernando Hicap.

Anakpawis expressed full support to the survivors’ demands for a P40,000 initial financial aid. Hicap said this can help the survivors restart their livelihood.

There are funds if only the government would choose to course it to the survivors rather than to the profit-oriented public-private partnership projects more favoured by Aquino’s supposed rehabilitation plan for the Yolanda-stricken central Philippines, as disclosed by Gabriela Women Party legislators.

Gabriela Women’s Party Rep. Luz Ilagan said that the government has been receiving aid on top of allotting a budget item specific for Yolanda rehabilitation.

“Considering that donations, both domestic and foreign, as well allocations of government funds are made to and for the victims, it is only fitting that the government listens, and listens intently, to the victims themselves. Aside from the remaining Calamity Fund/Quick Response Fund of 2013 as provided for under the Joint House Resolution No. 7, the P14.1 billion ($313.3 million) supplemental budget, the Presidential Social Fund, cash grants from foreign and domestic aid pledges can also be tapped,” Rep. Ilagan said.

The Gabriela legislator said it is unfortunate that most disaster response prioritizes Aquino’s Public-Private Partnership projects, investing larger amount of funds for the rehabilitation of infrastructures, instead of investing more on agriculture, which is the most damaged sector and the basic livelihood of the people in the affected areas.

As Gabriela Rep. Emmi de Jesus said, “If the Aquino government has the money to spend P200 million ($4.44 million) on substandard bunkhouses that will benefit only 100 families, at an overpriced cost of P1 million ($22 thousand) for every substandard bunkhouse unit, why is Aquino telling the (Haiyan) victims it has no money and no solution for the requested P40,000 financial assistance per family?”