“The fight against charter change is not about votes in Congress but about the demands of huge numbers of people gathering and forcing their district representatives not to throw support for charter change.”

Part 2 | Who will benefit from Chacha? Not the poor, progressive groups say

MANILA — Back in 2012, President Aquino said in news reports that he is willing to listen to proposals to amend the Constitution and that he is not closing his doors to charter change.

“We are in a democracy. We have to listen to different ideas and come up with what is best for the people,” Aquino said in a Sunstar report.

But now that moves to amend the Constitution is being fast tracked in both the lower and upper houses of Congress, the Aquino administration appears to be distancing itself from it. In his recent pronouncement, Aquino said, “There is no absolute certainty that if we lift the restrictions in our Constitution, there will be corresponding economic gain.”

“Before we do charter change, I think there should be concrete evidence that it would help our country,” Aquino added.

But progressive groups and lawmakers doubt whether the president is being truthful in his public pronouncements.

In recent weeks, Aquino’s allies in the Senate and the House of Representatives have been holding “marathon hearings” and before the lawmakers declared a recess in March, House Joint Resolution No. 1 was passed by the Committee on Constitutional Amendments and transmitted to the plenary for deliberations when the Lower House resumes in May. 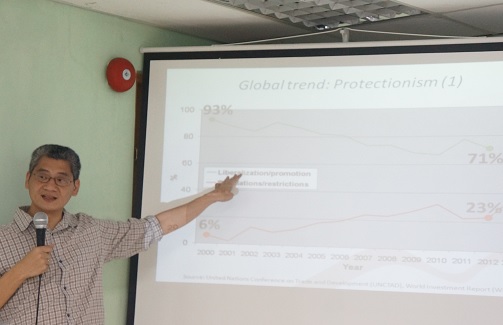 “They are claiming that they are not railroading the approval of House Joint Resolution No. 1. They said that as proof they even invited Sonny (Africa) and Liza (Maza) to present their positions (in committee hearings),” Kabataan Partylist Rep. Terry Ridon said in a forum organized by Ibon Foundation.

“No committee meets once a week. But they were able to do it twice,” he said.

Colmenares added that lawmakers pushing for charter change tried to stop us from questioning the procedures in passing the resolution, but we resisted.”

Other bills, which progressive lawmakers believe would be of help to the Filipino people, remain pending in Congress. Colmenares said lawmakers even canceled a hearing for the Freedom of Information bill so that they could vote on the House resolution on charter change so that it could be passed by the committee.

Colmenares said it is difficult to even put the Freedom of Information Bill on the committee’s agenda.

“Even if we were able to put (the Freedom of Information Bill) in the agenda, it would be hard to gather the congressmen for a committee hearing and also to find available rooms. If the committee hearing would push through, those who are against the it would give long speeches to kill time,” he added.

Distancing Malacañang from moves to push for charter change could just be a tactic of President Aquino to avoid suspicions that the administration is pushing for it to extend Aquino’s term in office or to rescind restrictions regarding the reelection of the president,” Colmenares said.

Jose Enrique Africa, executive director of Ibon Foundation, said that not one from among the basic sectors in the Philippines is asking for amendments to the Constitution. “Who are pushing for charter change?”

Africa quoted former US Ambassador to the Philippines Harry Thomas saying that for the Philippines to enter the Trans-Pacific Partnership – a trade agreement between the United States and eight other countries – it must “change laws, issue executive orders and introduce amendments to the Constitution.”

The Office of the US Trade Representative and the US State Department have also stated in their reports their complaints about economic restrictions in the Philippine Constitution.

The marathon hearings for charter change, Ridon said, also showed how the Joint Foreign Chambers are pushing for charter change. The likes of John Forbes of the American Chamber of Commerce were invited to speak during the committee hearing.

Recalling the case of Thomas van Beersum, a Dutch activist held at the airport and deported to Amsterdam reportedly for observing a protest action held during Aquino’s State of the Nation Address in 2013, Ridon said if Beersum was deported for supposedly intervening in the country’s internal affairs, what do you call inviting and allowing members of the Joint Foreign Chambers of Commerce to speak before a committee hearing that would tackle amendments to the Philippine Constitution? That is clearly political intervention in the country’s internal affairs by foreigners.

Ridon said that during the hearing, he questioned the citizenship of the representative of the Joint Foreign Chambers of Commerce. “Is it enough that they marry a Filipino woman (to meddle with the country’s affairs)?” Ridon said during the forum.

Ridon said progressive groups would look into every possible legal injury made by lawmakers supporting charter change and that they would file respective motions to delay the passage of the House Resolution on charter amendments.

If House Joint Resolution No. 1 will not be passed by 2015, Ridon said, it would be “dead in the water.”

Colmenares said lawmakers are rushing charter change before the election fever begins, roughly around 2015. During this time, it would be hard to get a quorum as politicians would be busy campaigning in their respective districts or would be considerate of the position of their constituents regarding charter change because it would have an impact on their chances come election time.

“If they pass this in haste, those who are against it would find it hard to stop it,” he said.

Colmenares said they have passed two resolutions urging members of the House of Representatives not to support charter change. But lawmakers did not support it.

Makabayan chairperson and former Bayan Muna Rep. Satur Ocampo said during the forum that the issue of charter change and the plan to dilute the protectionist provisions of the Philippine Constitution in favor of foreign direct investments would result in Filipinos losing control over their own country, which is all about the country’s sovereignty.

But Colmenares said the fight against charter change does not lie inside the halls of Congress alone.

“The fight against charter change is not about votes in Congress but about the demands of huge numbers of people gathering and forcing their district representatives not to throw support for charter change,” Colmenares concluded.