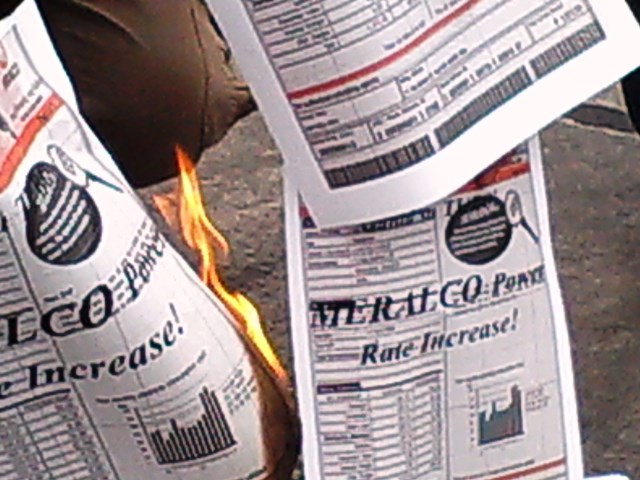 MANILA — Workers and urban poor allied with KPMM (Koalisyon ng Progresibo at Makabayang Manggagawa) from Makati and Pasay protested in front of the Meralco Sub-Office at the intersection of Ayala and Buendia Avenue in Makati this morning (Apr 14). They condemned the series of increases in power rate imposed by Meralco since November 2013.

A statement issued by the KPMM-Pasay-Makati warned the public against the rate hikes imposed by Meralco, saying the company and its “cohorts” in the power industry have “tried to trick consumers in its November and December 2013 electricity rates.” The group reiterated that only in the face of public opposition that led to a Supreme Court temporary restraining order did Meralco trim its proposed hike from Php 4.56 to 45 centavos per kilowatt-hour. For the KPMM, though, that reduction is just a company effort to regain public trust.

Labor leaders with the Kilusang Mayo Uno said in another statement that even the reduced power rate hikes from the proposed P4.15 per kWh and P5.33 per kWh hikes are “still unacceptable as these stem from big capitalists’ collusion to squeeze bigger profits from consumers through rate hikes.” 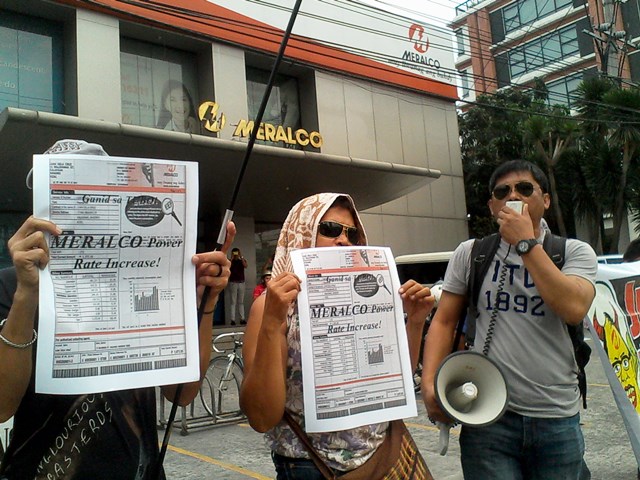 “Now, Meralco, with its cohorts, is trying once again to fool us with their TV advertisements claiming they get only 18 percent of the total payment by consumers,” KPMM said. After what the public had learned about the things Meralco could do to increase rates, “those TV ads are self-serving, don’t you think?” asked Charlie Arevalo, spokesman of Makati-Pasay KPMM.

Meanwhile, in 11 other branches of Meralco in Metro Manila, workers led by national labor center Kilusang Mayo Uno, together with members of other sectoral organizations, also simultaneously conducted a picket-protest this morning. They condemned as well the 89-centavo per kilowatt-hour rate hike announced by the power firm for April and its plan to hike rates until July.

KMU was joined by other progressive sectoral organizations such as Gabriela, Kalipunan ng Damayang Mahihirap or Kadamay, Migrante, and Anakbayan and government employees’ center Confederation for Unity, Recognition and Advancement of Government Employees or Courage.

In a statement, Roger Soluta, KMU secretary-general, said “We have to intensify our campaign because the Aquino government has basically supported big capitalists’ push for a power rate hike.” He cited as proof the fact that the Aquino government has approved the record-high rate hike through the Energy Regulatory Commission last November; that it said it can do nothing to stop the hike, and that it “merely staged” a dispute with the chairman of Energy Regulatory Commission because of widespread opposition.

The labor leader said the Aquino government has also approved the rate hike for April and did not protest Meralco’s announcement that it will seek rate hikes until July, or during the summer season when an increased power demand is projected.

Aside from opposing questionable electricity rate hikes, union leaders also took issue with EPIRA (Electric Power Industry Reform Act), saying its justification for having privatized the NAPOCOR (National Power Corporation) and many of its power generating plants has been repeatedly belied by experience. The privatization, they recalled, promised to provide cheaper power rates and adequate supply based on increasing demand for power. Both did not materialize, the KPMM said. 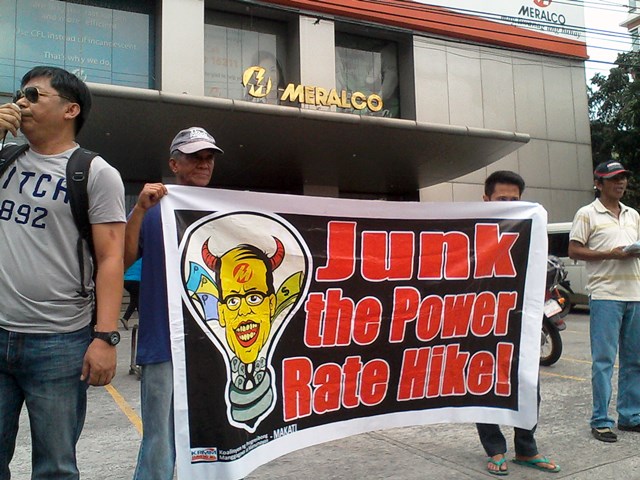 Instead, there remained the NAPOCOR debt despite the sale of most of its assets. Worse, the KPMM said, power rates are “skyrocketing.”

On top of this April to July rate hike, a bigger hike looms as the Supreme Court’s Temporary Restraining Order against the P4.15 per kWh rate hike sought by Meralco starting last November is set to expire on April 22nd.

Soluta of KMU said their simultaneous picket-protests in 11 Meralco branches this morning (Apr 14) are part of their contribution to the intensifying campaign against power rate hikes. The KMU and KPMM urged the public to support their campaign.

Meralco is the Philippines’ biggest distributor of electricity. It reports last year a “flat” profit growth that amounted to more than P17 billion.