MANILA – Six months after super-typhoon Yolanda (international name Haiyan) battered central Philippines, hundreds of thousands of families are still in need of appropriate relief and rehabilitation efforts. Various concerned groups emphasize the word appropriate, because each day, since Day 1, it has become apparent to them that the Aquino government holds in mind a different manner of relief and rehabilitation. According to People Surge, a region-wide alliance of survivors of the disaster, Aquino’s responses constitute another man-made disaster — so far, it has included militarization and increased presence of US troops, ‘color-coded’ relief distribution, and a profit-driven ‘rehabilitation’ scheme.

Tulong Kabataan Volunteer Network, a group of students and youth participating in disaster response and risk reduction, held a candle-lighting ceremony at Plaza Miranda, May 8, to mark the sixth month of Yolanda. They are currently deploying volunteers to Yolanda-hit areas in the Visayas. Members of Bagong Alyansang Makabayan also marked the typhoon’s sixth month by lighting lanterns calling for justice, and remembering the victims through a mobile photo exhibit also at Plaza Miranda. In Eastern Visayas, similar gatherings were held by the survivors. 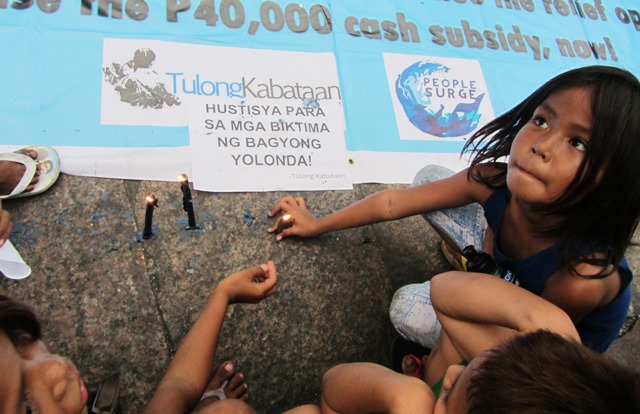 “The government didn’t respond promptly after the storm hit Eastern Visayas. After six months, hundreds of thousands are still at risk of worsening poverty because there is lack of support,” said Michael Angelo Rivera, national coordinator of Tulong Kabataan.

Despite the claims of the Aquino government that they are doing their best, typhoon survivors still dwell on tents today; they still suffer from hunger; there is still no meaningful program for reconstructing their livelihood; and worse, they are called various names by officials of the Aquino government. Recently, presidential rehabilitation assistant Panfilo Lacson called them “lazy.”

The same official has dubbed the protesting survivors as “leftists” in the past few months.

Instead of orchestrating a speedy relief and rehabilitation, the Aquino government is demonstrating something else. According to statements of various progressive groups, the Aquino government response showcases corruption, criminal neglect and acts “reeking of” petty rivalries over who would corner what in terms of business contracts and political mileage.

Temporary bunkhouses built for the victims have been criticized by experts for being substandard and overpriced. Social Welfare and Development Secretary Dinky Soliman and her agency were embroiled in an issue of handing out spoiled goods as more donations rot in warehouses. Meanwhile, there are still no programs for permanent housing and sustainable jobs or livelihood for the victims.

In fact, there is still no “final rehabilitation plan” up to now, as a spokesperson from the Office of the Presidential Adviser for Rehabilitation and Recovery’s (OPARR) reportedly admitted at a Senate hearing, May 7.

OPARR spokesperson Karen Jimeno blames the delay in the creation of a rehabilitation master plan on the failure of the National Disaster Risk Reduction and Management Council to submit the requisite final “Post Disaster Needs Assessment” (PDNA).

“It has been six months, the negligent BS Aquino regime has not delivered meaningful aid, and his cabinet secretaries even chose this date to engage in fault-finding. The people cannot eat their blind items,” said Gabriela Women Party Representative Emmi de Jesus, in reaction to blind items about dysfunctional disaster officials and the blame game playing out between Panfilo Lacson and Interior and Local Government Secretary Mar Roxas.

According to de Jesus, there is no difference between the handling of so-called rehabilitation by these feuding officials. “Both of them should realize that their so-called rehabilitation programs are anti-poor plans that cater to the government’s privatized rebuilding projects. While people are evicted from No Dwelling Zones and made to endure continuing lack of schools, jobs and health care, Lacson and Roxas want crony investors to get juicy contracts to build tourist clubs and business centers that drive away people from their villages.”

A report released by international NGO Oxfam said the Philippine government is focusing on relocation efforts, referring to the Aquino government’s forced relocation of at least 200,000 people mostly fishermen and vendors away from the coast, the source of their livelihood.

In the absence of a final master rehabilitation plan, what the Aquino government has to show for, six months since Yolanda, is a business-led reconstruction effort, which the research group Ibon Foundation said has been proven a failure in other countries.

The Aquino administration’s “Recovery Assistance for Yolanda” or RAY, the only document so far outlining its rehabilitation efforts for Yolanda-affected areas, underscores the leading role of foreign aid and big business in various recovery and reconstruction areas in Eastern Visayas, according to IBON. These cover housing and resettlement; infrastructure; facilities and utilities; education; health and other services; agriculture; local government operations; short-term employment opportunities and enterprises.

Aquino is applying to the Philippines the business-led rehabilitation strategy “Build Back Better” promoted by the World Bank and the United Nations, said IBON. It noted that this rehabilitation strategy has not yielded benefits for the public globally, citing the experience of Haiti after the earthquake in 2010 and Aceh in 2004. Both countries went through controversial reconstruction efforts in the hands of local and foreign big businesses and involving huge amounts of funds.

The Philippine Congress has passed a P14.6 billion ($324 million) supplemental budget for the typhoon survivors, and the Aquino government has received international pledges of over P24.9 billion ($553 million). But there is hardly an improvement in the typhoon-ravaged provinces of central Philippines, according to Kabataan Partylist Rep. Terry Ridon.

Some of these funds are being spent on public-private projects, with corporations allowed under RAY to choose among the Yolanda-affected areas based on the government’s subdivision of these into “development areas or clusters”. Early this year, nine giant corporations owned by the country’s richest including Gokongwei, Zobel-Ayala, Aboitiz, Pangilinan, Ty, Razon, Sia, Lopez, Zamora, Gaisano, Cojuangco, Ang, Tan, Sy and Yuchengco, have already committed to adopt 16 out of 24 development areas. These corporations have diverse interests in property development and real estate, mining, water and power, transportation and tourism, among others.

It is the projects under this mode of ‘reconstruction’ that are “on track”, as Lacson reported last Wednesday. Yet, these projects are anti-people and not sustainable in nature, said the youth group Anakbayan, who also dubbed the “Build Back Better” agenda as “nothing but a legal corporate land grab in the guise of a rehabilitation program.”

“Lacson and Aquino’s habit of daydreaming might stop if they themselves are forced to live in substandard overpriced bunkers,” Anakbayan said in a statement. The group suggested kicking these officials out of their position, “for their blatant incompetence that has intensified the suffering of the Victims of Yolanda.”

“The buck stops in Malacañang and ‘lazy’ government officials who are sorely remiss in their jobs should be fired, including those who are using this disaster to make more political profits from the misery of our people,” said Bayan Muna Rep. Carlos Zarate.

Aside from the big business groups, the US government is also seen as taking advantage of the Yolanda disaster.

Immediately in the aftermath of Yolanda, US Marines had arrived in Tacloban claiming to assist in relief efforts. Their presence bolstered the Aquino government’s deployment of more soldiers seeking to regain control of the typhoon-hit areas.

Camp Downes in Ormoc City is now being restored and Tacloban Air Field is more frequently in use after the Aquino and Obama governments signed the Enhanced Defense Cooperation Agreement, Rivera of Tulong Kabataan noted. Yet, the group noted that rather than militarization, what the survivors need are trained volunteers, experienced social workers and medical experts. 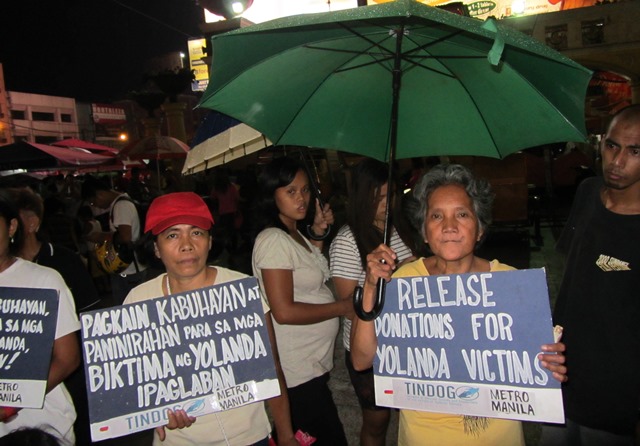 “It is detestable for Aquino to exploit the Filipino people’s misfortunes to justify invasion of foreign troops in Philippine soil,” said Velasco of LFS. If Aquino and his government had carried out their people-given mandate to serve the country and its people, we would not have any need for those troops in the first place, the youth leader continued.

Six months after Yolanda, survivors and their supporters are still demanding for the speedy delivery of the minimum demands of the Yolanda survivors’ alliance People Surge, to address the basic needs of the survivors.