MANILA –Students and other youth groups led by the National Union of Students of the Philippines (NUSP) stormed the main office of the Commission on Higher Education (Ched), May 14, to demand a stop to increases in tuition and other school fees for the incoming academic year.

“For this year, students have consistently and vigilantly involved themselves in the campaign against tuition increase. Researches, critiques and analyses have been laid to monitor such hikes, and how these hikes have perennially hindered the access of students and the youth to basic, secondary and tertiary education in the country,” Sarah Elago, national president of the NUSP, said. 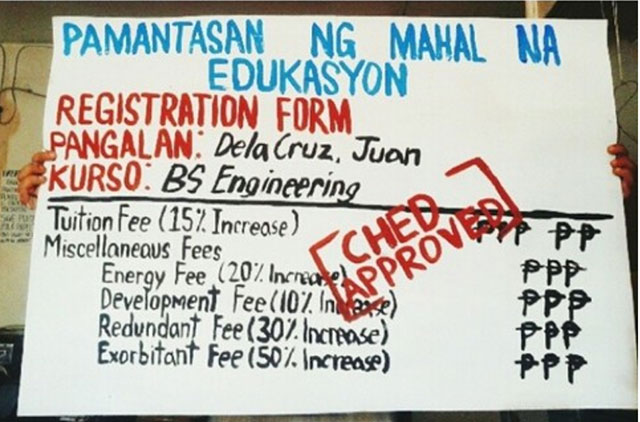 Higher education institutions are mandated to comply with the Ched Memorandum Order No. 2 series of 2012, or the guidelines for tuition and other fees increases. The NUSP said that many HEIS violate the guidelines. The most common violation, according to the NUSP, is the absence of democratic process of consultation between the students and the school administrations.

Anakbayan chairman Vencer Crisostomo said Ched should address the issues that are being raised by the students. “Under Republic Act 7722 or Higher Education Act of 1994, Ched should ‘take appropriate steps to ensure that education shall be accessible to all’, which is in contrast to Ched’s role today as the spokesperson and defender of capitalist educators and their tuition fee hike schemes.”

‘Scholarships are not solution’

Elago lambasted Ched’s statement that students who cannot afford to pay tuition can look for scholarships to finance their studies or to just transfer to state universities and colleges. “How alarming it is that Ched has the gall to tell us that if we cannot afford the high cost of private education, then we should just go ahead and transfer to state universities and colleges (SUCs) or even look for scholarships, which are limited,” said Elago.

Christopher Tejada, father of Kristel Tejada, the UP freshman who committed suicide after she was forced to go on leave due to unpaid tuition said that applying for scholarship is like begging or asking for alms. “The youth have the right to accessible and affordable education. But the government is not giving it to them. Education in our country has a price and the Filipino youth can no longer afford it https://www.bulatlat.com/2014/03/19/tertiary-education-no-longer-for-the-poor-majority/,” he said in a media forum organized by the NUSP, May 14 at the University of the Philippines in Diliman.

Elago also said that scholarships could never address the real problem of commercialized education. “Moreover, even SUCs are run like private corporations, with tuition and other school fees being increased and imposed here and there. Facilities are inadequate, all because the Aquino administration slashed the education budget.”

Elago said every year, higher education institutions are proposing tuition increases regardless of how the Filipino people and their families struggle to make both ends meet.

Crisostomo slammed the inaction of the administration of President Benigno S. Aquino III on the call of the youth. “What infuriates us is how the Aquino regime and Ched have been tolerating the tuition hikes for a long time. This is a flagrant display of their allegiance to the big capitalist educators who are bleeding the students and their families dry.”