“The purpose of EDCA is not about promoting the interests of the Filipino people because “it was hatched to protect US economic and security interests and maintain US global power protection and military superiority at a low cost.”

MANILA — Barely a month after the signing of the Enhanced Defense Cooperation Agreement (EDCA) between the US and Philippine governments, two separate petitions have been filed, May 26 and 27, urging the Supreme Court to declare the said agreement as unconstitutional. More are expected to follow suit. 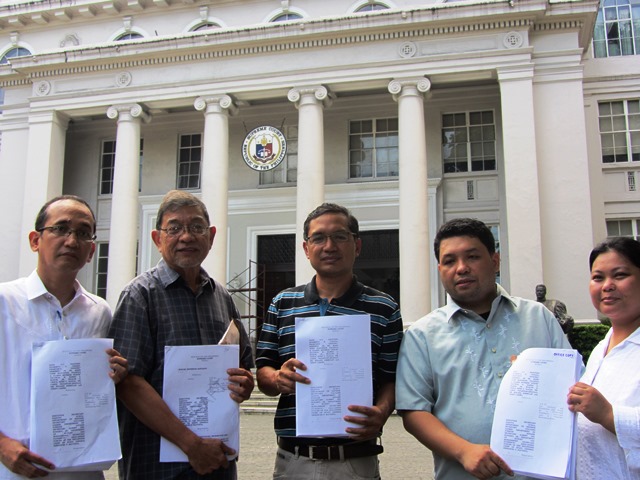 “The writ of certiorari and prohibition is being sought by the petitioners on the ground that the respondents committed grave abuse of discretion amounting to lack or excess of jurisdiction when they entered into the EDCA with the US government in utter disregard of the national sovereignty, territorial integrity and national interest provision of the Constitution, other provisions of the Philippine Constitution and various Philippine laws and principles of international law,” the second petition read.

“As respondents’ actions are causing and will cause grave injustice and irreparable violation of the Constitution and the Filipino people’s rights, and given the transcendental importance of the case, petitioners, as taxpayers and concerned citizens, seek the issuance of a temporary restraining order and/or writ of preliminary injunction ordering the respondents to cease and desist from proceeding with the implementation of EDCA and from further threatening and performing acts that are violative of the constitution,” the petition read.

The petitioners said the agreement “was negotiated in secrecy for nearly two years. During the period that the respondents and the US were negotiating EDCA, only bits and pieces of information were released regarding the terms of the Agreement.”

This view is being shared by Senator Miriam Defensor-Santiago who has been asserting that the EDCA should have secured the concurrence of the Senate. Senator Santiago said she is confident that the Supreme Court will strike down the said agreement on this basis.

Both groups said the EDCA violates the Constitutional ban on the entry and storage of nuclear weapons in the country.

The mention of storage of materials and equipment for “humanitarian assistance and disaster relief,” the petitioners said, is only a pretext for storing of weapons, ammunition and other war materiel, including military drones, which are not just being used for surveillance but also as an offensive weapon.

Rachel Pastores of the Public Interest Law Office said there are a lot of countries providing humanitarian missions in the Philippines even without such military agreement.

The petitioners said the EDCA also violates the Constitutional prohibition on the presence of foreign military bases, troops or facilities beyond 1991 except under a treaty duly concurred in by the Senate. The petitioners said the activities authorized to be conducted under EDCA constitute basing activities and that facilities to be constructed and military equipment that would be stored in agreed locations “are consistent with the features of a foreign military base.”

The petitioners said the government definition of a foreign base: extraterritoriality, exclusivity and ownership applies to EDCA. Such arrangements, according to the petitioners, have brought back the US bases but under a different name but in a more flexible arrangement.

“Imagine if there would be 100 agreed locations that would be approved. This means that there would be 100 military bases in the country where the US may exercise full power and authority. How can we allow this kind of agreement?” Rachel Pastores of the Public Interest Law Center, which represents the second groups of petitioners, said.

The Philippine Supreme Court has the power to look into the Constitutionality of a document or agreement. But the EDCA stipulates that any dispute on the said agreement cannot be brought to any court in the Philippines, said Rommel Bagares, lawyer from Center for International Law, which represents the first group of petitioners. He said this is a violation of our Constitution.

Likewise, the petitioners said, the EDCA deprived the Supreme Court of judicial power over the acts of US forces and contractors committed within the Philippines, resulting to any civil, criminal or administrative liability.

The petitioners said with the EDCA, the Philippine government waived the country’s sovereignty. This, they said, constitutes a derogation of our country’s dignity and an unconscionable sellout of our sovereignty.

Within the “agreed locations,” the petitioners said, the US Armed Forces is being given “free and blanket access and authority to conduct activities that are limitless in number, boundless in areas, and are as yet unidentified.”

The petitioners added that giving the US forces exclusive use of the “agreed locations” deprived the Philippine government of its right to exercise police power.

“The respondents, through the EDCA, with grave abuse of discretion, authorized the Americans blanket authority to take ‘appropriate measures’ to protect US personnel and private contractors, which may include arrests and even use of lethal force. The US is merely obliged to ‘coordinate’ such powerful measures with the Philippine government,” the petition read.

Indefinite stay of US troops 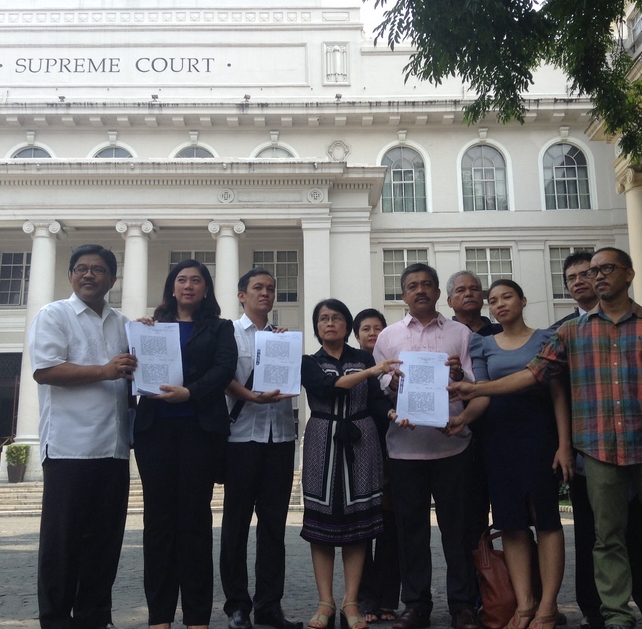 The EDCA practically gave the US Armed Forces unlimited use of Philippine facilities, according to the petitioners. While the agreement has an initial term of 10 years, the agreement stipulates that, “it shall continue in force automatically unless terminated by either Party by giving one year’s notice through diplomatic channels of its intention to terminate this agreement.”

Bayan Muna Rep. Carlos Zarate said “This is a treachery to the people. Long after Aquino is no longer president, the US military base would still be here.”

Zarate warned that President Aquino “would be haunted by the Filipino people for his shameful surrender of sovereignty to the US government.”

The petitioners also raised before the Supreme Court a provision in EDCA that provides that the “United States shall not intentionally release any hazardous materials or hazardous waste owned by it, and, if a spill occurs, shall expeditiously take action in order to contain and address environmental contamination resulting from the spill.”

“Implied in the said provision is the fact that US forces are allowed to bring into the country hazardous materials or hazardous wastes, threatening the right of the Filipino people to a balanced and healthful ecology and their right to health,” the petition read.

Citing a Supreme Court decision back in 1993, petitioners said, “Our Supreme Court held that right to a balanced and healthful ecology enshrined in our Constitution is self-executing and judicially enforceable.”

Petitioners also questioned the vague provisions on the environment stipulated in EDCA, adding that the US is not even made to account for ‘unintentional’ release of hazardous materials or waste.

Clemente Bautista of Kalikasan-People’s Network for the Environment said the destruction of Tubbataha reef, contamination of sea water, among others could be repeated under EDCA.

“EDCA is anti-environment. It should be scrapped,” Bautista told reporters.

Gabriela Women’s Party Rep. Emmi de Jesus said American soldiers are also being given a place for “rest and recreation” at the expense of the Filipino women.

Prostitution, she added, is one of the social costs brought about by the continuing presence of US troops. “Commodification and objectification of women will worsen,” De Jesus said.

The petitioners also denounced as “false hopes” the supposed gains from EDCA and the suggestion that the US will come to aid the Philippines in a conflict with China.

Casiño said that Obama made clear they are not here to contain China. He said the US has close trade and economic relations with China, “they will not rock the boat.”

“EDCA will never be a deterrent, contrary to the illusions of the Armed Forces of the Philippines. It is in fact a magnet for attack,” said Olalia. He explained that because we are not involved in any war, while the US has many enemies, nothing would now stop the enemies of the US from attacking us.

“Deploying troops, equipment, having facilities here with nuclear weapons, war materiel – we are now like one big aircraft carrier of the US,” Olalia said. He added that that makes us a target of US enemies.

In their petition, they cited that under International Humanitarian Law, the nature, location and purpose of troops, military facilities (like those of the de-facto US bases in the Philippines) are legitimate objects of attack.

At the same time, rather than helping resolve the country’s territorial dispute with China, the EDCA “is stoking the fire, aggravating the situation,” said Olalia. It is clearly not to the advantage of the Philippines, said the petitioners.

After EDCA was signed, Bagares said, the Chinese media issued a statement saying that the Chinese government views it as a hostile move on the part of the Philippines and US.

“It is clear to the Chinese, EDCA is in aid of the US pivot to this region (Asia-Pacific),” Bagares told the media.

The petitioners argued that the purpose of EDCA is not about promoting the interests of the Filipino people because “it was hatched to protect US economic and security interests and maintain US global power protection and military superiority at a lower cost.”

The first group of petitioners is not only questioning the EDCA, but also its mother treaty the Mutual Defense Treaty.

The Mutual Defense Treaty lost its legal mooring because it has already been superseded by the 1987 Constitution, which renounces war as a national policy, said Bagares.

“We say in the Constitution, we renounce war as a national policy, but the MDT embodies a view, from the Cold War, focused on running a system based on war,” Bagares said.

Reversal of the people’s gains

“In 1992, we were able to repudiate the US military bases. It took a long time for us to do that,” said lawyer Esteban “Steve” Salonga, son of Senate President Jovito Salonga who led the Senate in nixing the US bases treaty.

For Salonga, EDCA means “we’re retracting all that and allowing entry here of US troops, arms, war materiel, at the expense of the country’s interests and Constitution.” He said EDCA tarnishes the image of our country, as if we are all part of the US Armed Forces now, and we’re allowing the US to launch war against others, using the Philippines.

He said it’s time for the Philippines to make independent moves vis-à-vis Chinese actions, rather than following and kowtowing to US actions. He urged the Supreme Court to examine EDCA closely, saying the high court must know that President Aquino, who promised he would defend the Constitution, has instead violated it.

Reyes said, “Fifteen years ago, we went to the Supreme Court to question the VFA based on the fear that it would lead to the return of US bases and permanent troop presence. We have been proven right as we now have the EDC,A which would allow the return of US bases under a different name. The EDCA is but the latest in a long line of unequal agreements with the US that violate our sovereignty. It is time for the SC to strike down this heinous affront to our national sovereignty, dignity and national interest.”