Republic Act No. 9745 or the Anti-Torture Act of 2009, signed into law under then President Gloria Macapagal Arroyo, but the way the government has been handling cases filed under the said law lends truth to the legal maxim “Justice delayed is justice denied.”

MANILA – Human rights defenders assailed the snail-paced justice for torture victims who filed cases against state security forces. This calls into question the government’s sincerity in implementing the Anti-Torture Law.

“The torture cases filed by the arrested health workers or the Morong 43 and Rolly Panesa are snail-paced. It is an indication that the government is not serious in holding perpetrators of torture accountable for the crimes they have committed,” said Jigs Clamor of the Samahan ng Ex-Detainees Laban sa Detensyon at Aresto (Selda). Clamor was among the protesters who marched to Mendiola on the commemoration of the International Day in Support of Victims of Torture on June 26.

Human rights defenders had welcomed the passing of Republic Act No. 9745 or the Anti-Torture Act of 2009, signed into law under then President Gloria Macapagal Arroyo, but Clamor said that at present, cases filed against the perpetrators are hardly prospering.

These two cases exemplify how army and police officers charged with torture even moved up the hierarchy or were dropped from the complaint by government prosecutors. 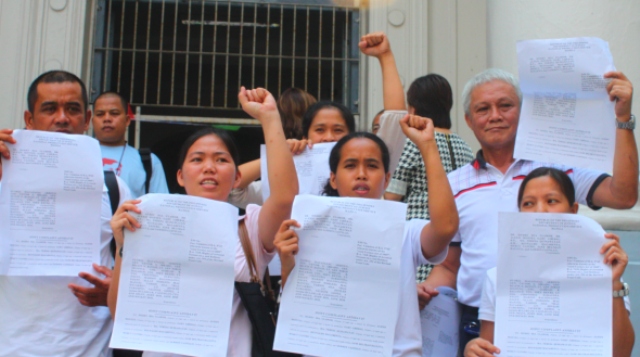 The 43 health workers, collectively referred to as the Morong 43, were arrested on Feb. 6, 2010. They were branded as members of the New People’s Army (NPA) and charged with illegal possession of firearms and explosives. Arrested at gunpoint, they were made to kneel and were blindfolded for 36 hours. They were interrogated, deprived of sleep and were forced to admit that they were members of the NPA. Even at the detention center, they were heavily guarded and remained handcuffed, so that they needed to be spoon-fed or to have a guard pull down their underwear when they urinate.

Most of the 43 health workers were released 10 months later.

In 2012, eight of the Morong 43 filed criminal charges against former President Arroyo and officials of military and the police for violating the Anti-Torture Act of 2009.

The health workers, in their joint complaint-affidavit, said they were subjected to torture, both physical and psychological. Medical certificates were attached to their complaint annexes to prove their allegations.

Ephraim Cortez of the National Union of Peoples’ Lawyers (NUPL) told Bulatlat.com that after two years, the Sandiganbayan has yet to issue a resolution on the complaints filed by the health workers.

The Commission on Human Rights too has yet to come up with a resolution on the complaints, Clamor said.

Instead of holding to account members of the military who were involved in the arrest and detention of the Morong 43, Clamor said, the perpetrators were, instead, promoted.

In 2012, Major General Jorge Segovia, former commander of the 2nd Infantry Division of the Philippine Army, was promoted to lieutenant general and assumed the post of commanding officer of Eastern Mindanao Command.

Apart from torture charges, six of the Morong 43 also filed a civil case against Arroyo and other military officials. The case, too, is hardly moving. 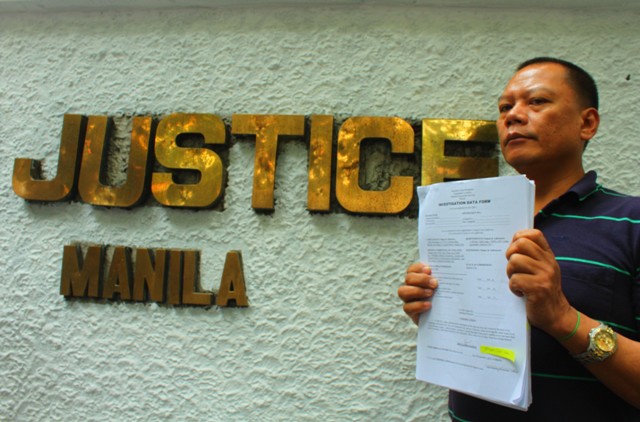 Panesa was arrested on Oct. 6, 2012 and was detained for 11 months. The military claimed that he is Benjamin Mendoza, an alleged high-ranking official of the Communist Party of the Philippines (CPP) in Southern Tagalog and has a bounty on his head amounting to $133,000.

In a previous Bulatlat.com report, Panesa’s partner Marites Chioco said Panesa’s face “was bloated, blood dripping from his ears, his lips broken” when she saw him the following day after his arrest at Camp Vicente Lim in Canlubang, Calamba in Laguna.

In a decision dated Aug. 27, 2013, the Court of Appeals ordered Panesa’s release, saying that it was a “case of mistaken identity” and that Panesa “is a simple security guard and not a high-ranking officer of the CPP-NPA.” He was released on Aug. 30.

On Sept. 4, 2013, Panesa filed charges of torture, unlawful arrest, incriminatory machination and perjury against several military, police officials and witnesses they presented before the court.

This June, the Department of Justice, in a resolution, dropped high-ranking military and police officials such as Major Generals Alan Luga and Eduardo Del Rosario, Police Supt. James Andres Melad, Sr. Supt. Manuel Abu and Chief Insp. Reynaldo Mendoza from the torture charges as “there is nothing in the complaint that specifically alleges their participation in complainant’s ordeal, while he was in custody except for the press releases issued upon his capture. They are seen as remotely associated to those who effected the arrest and those who held the complainant on custodial investigation.”

It also absolved lawyer Alex Alberto Popanes of the Judge Advocate General Office for the crime of incriminatory machination and found no probable cause to indict Col. Generoso Bolina and military witnesses Luis Grajo Rayos, Michael Rojo Alvarado and Erwin Rosales for perjury.

Respondents such as Police Insp. Bonifacio, SPO1 Christopher E. Flores, PO2 Ariel Dela Cruz, PO2 Joseph Fernandez were, on the other hand, indicted for less serious physical injuries, violation of section 4b (mental and psychological torture) of the anti-torture law, violation of the rights of arrested persons and grave coercion.

Karapatan chair Marie Hilao-Enriquez disagreed. “It is a clear and established fact that Panesa was harassed, intimidated and tortured not only mentally and psychologically but also physically to force him to admit he is ‘Benjamin Mendoza.’ His badly beaten face is a telling evidence that he was heavily tortured, while being interrogated by the PNP and the AFP,” she said.

The NUPL, Panesa’s counsel, filed a 26-page petition before the Department of Justice seeking a partial review and reversal of its resolution that absolved the high-ranking police and military officials from the torture case.

The NUPL said, “that to uphold the findings of the DOJ prosecutor would be a dangerous precedent and would negate the intention and purpose for which the anti-torture law was enacted.”

Military and police officers, the NUPL said, “were included in the complaint on the basis of the principle of command responsibility, citing Section 13 of the Anti-Torture Law which holds superior military, police or law enforcement officer or senior government official who issued an order to commit torture or immediate commanding officer of the AFP unit concerned or the immediate senior public official of the PNP and other law enforcement agencies criminally liable for acts of torture.”

Citing the Supreme Court decision on human rights victim Noriel Rodriguez, Cortez said the president, commander-in-chief of the military, could be held to account for human rights violations under the principle of command responsibility.

He added that Panesa was mistaken to be a certain Benjamin Mendoza, said to be secretary of the CPP- Southern Tagalog, his arrest, detention and torture “would surely not just involve low-ranking military officials.”

“Torture happens not just because there is an abusive police or soldier. It is a systematic way to repress the struggle of the people. There is always a higher official behind it,” Cortez said.


The Anti-Torture Act of 2009 prohibits “secret detention places, solitary, incommunicado or other similar forms of detention where torture may be carried out with impunity.”

Yet, Clamor said the military has not yet followed what is enshrined in the law, which tasked them to divulge the location of such detention centers.

“To top it all, despite the anti-torture law and other human rights laws passed, the Aquino government circumvents it and use it as a facade to tell the public that they are doing something. But in reality, perpetrators have yet to be convicted,” he added.

Retired Major General Jovito Palparan remains scot free, Clamor said. Palparan is one of the top military officials accused in the enforced disappearance of University of the Philippines students Karen Empeño and Sherlyn Cadapan, and peasant Manuel Merino. The three had been missing since June 26, 2006.

In a protest action for the commemoration of the International Day Against Torture, human rights groups called on the government to hold to account human rights violators, not just the three senators involved in the infamous pork barrel scam, referring to Juan Ponce Enrile, Ramon “Bong” Revilla Jr. and Jinggoy Estrada.

Clamor said instead of sending human rights violators to jail, activists and consultants of the National Democratic Front of the Philippines have ended up behind bars.

There are 489 political prisoners and the number would most likely to go up as the same counterinsurgency program continues to be implemented, Clamor said.

Karapatan, in a statement, said “torture by any form and whatever circumstance a victim may be must not be applied to anyone. Several of the political prisoners now languishing in jail have been tortured. Therefore, we raise our voices to stop torture and free all political prisoners.”

The Anti-Torture Law “ensures that the human rights of all persons, including suspects, detainees and prisoners are respected at all times; and that no person placed under investigation or held in custody of any person in authority shall be subjected to physical, psychological or mental harm, force, violence, threat or intimidation or any act that impairs his/her will or in any manner demeans or degrades human dignity.”

Acts of torture, as stipulated in the law, include, but are not limited to physical torture such as systematic beating, food deprivation, electric shock, cigarette burning, rape and sexual abuse, among other means to cause severe pain, exhaustion, disability or dysfunction and mental and psychological torture such as blindfolding, threatening them or their relatives of harm, confinement in solitary cells, prolonged interrogation, among others.