“Do the members of the claims board understand that it was martial law, when military power took over civilian institutions? How do you expect victims, many of whom are farmers and ordinary people, to acquire such documents? How could they ask for legal papers when they were massacred, abducted, arrested and tortured in huge numbers?”- Karapatan

MANILA – There is no recognition or reparation, but instead disenfranchisement for martial law victims demanding reparation.

Human rights defenders criticized the poor implementation of the Human Rights Victims Reparation and Recognition law saying, martial law victims were made to go through the proverbial eye of the needle to apply for the indemnification that is long denied them.

“After two months of the law’s supposed implementation, problems are piling up. Aside from the former PNP general’s appointment as head of the claims board, the application process does not accommodate and even discourages martial law victims to file,” Marie Hilao-Enriquez, chairwoman of Karapatan and one of the petitioners in the Hawaii class suit, said.

“Also, there is no categorical statement from the claims board that it shall recognize the 9,539 members of the class suit and the 24 direct action plaintiffs against Marcos in Hawaii,” the Karapatan chair said. 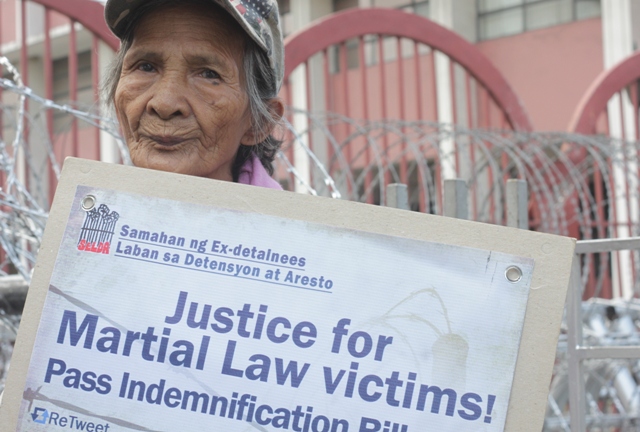 Enriquez said she and fellow martial law victims monitored how the application process was being implemented in HRVCB’s main office at the University of the Philippines and its on-site regional centers.

The implementing rules and regulations of the Human Rights Victims Reparation and Recognition Act of 2013 stipulated that victims would only need to present an affidavit narrating the circumstances of the violation they experienced, a government-issued ID and other supporting documents.

Legal heirs, on the other hand, are required to present their birth certificate as proof of their relationship to the victims.

Enriquez, however said, this is not what is happening on the ground.

“The claims board asks for too many requirements from the victims, many of which were outright unnecessary,” she said. Victims were required to produce certificates of birth, marriage and, for some, death that were issued by the National Statistics Office.

Enriquez said paralegals and lawyers working for the claims board had seemingly forgotten the incidents that happened during the martial law.

“Do the members of the claims board understand that it was martial law, when military power took over civilian institutions? How do you expect victims, many of whom are farmers and ordinary people, to acquire such documents? How could they ask for legal papers when they were massacred, abducted, arrested and tortured in huge numbers?” Enriquez said.

Enriquez said only a small percentage of thousands of those who arrived to file before the claims board was accommodated in the regional on-site centers, which operated for only two to three days per location.

In Angeles City in Pampanga, the first regional on-site center held, Enriquez said the claims board only accepted 300 applicants on its first two days. Hundreds were not able to file their application.

In Lucena City in Quezon, only 93 out of the more than 600 victims present were processed. In Iloilo City, 268 out of 800 victims were able to file application.

“The application process should accommodate the majority of those who have come forward to file. It is the claims board’s task to prove the veracity of their claims application. Denying application forms this early is contrary to the principle of recognizing victims,” explained Enriquez.

The HRVCB said they will return to accept other pending applications at least in Central Luzon. But Enriquez noted that no exact date was set.

“Their actions lead us to ask, is it the interest of BS Aquino’s claims board to recognize victims, or another callous effort to disenfranchise them?” said Enriquez.

Former Bayan Muna Rep. Satur Ocampo, who was detained and tortured during martial law, said the claims board should automatically recognize the 9,539 members of the Hawaii class suit against former President Ferdinand Marcos.

“We demand that the claims board acquire a copy of the masterlist of class suit members where the 9,539 victims are listed and were the ones remain intact,” Ocampo said.

Ocampo is among the more than 2,000 victims who were delisted from the class suit and are unable to claim reparation.

Sabotaging of the law

Enriquez said the Aquino administration is sabotaging the implementation of the law intended to recognize and indemnify the sufferings they experienced during the martial law.

“When BS Aquino was quoted by media reports as saying that there are ‘those who would want to sabotage this law,’ he was definitely talking about us who vehemently objected his appointment of PNP Gen. Sarmiento as HRVCB head. Now, by his actions, it is the Aquino government that is sabotaging the law at the expense of martial law victims,” Enriquez said.

Enriquez warned Aquino “not to disenfranchise victims more by violating the law which we, the martial law victims, fought for in a long and hard struggle to be passed and implemented.”

She added, “We ousted a dictator who denied the people of their rights. We hope BS Aquino can learn the lessons of history.”