“The price of war has been incalculable…Listen to the anguish of men and women.”

Over 500 Church people, representatives from the academe, human rights defenders, workers, peasants, indigenous peoples and other sectors gathered at the launch of Kapayapaan, July 15 at the Claret School in Quezon City. Kapayapaan is a broad campaign for a just and lasting peace.

The formal talks between the GPH and the NDFP have been stalled since 2011 and the so-called special track hit a snag since 2013. Both parties accused each other of setting preconditions to the talks.

Bishop Emeritus of Kalookan Deogracias Iñiguez, co-chairman of the Ecumenical Bishops Forum and convenor of the Philippine Ecumenical Peace Platform, said Kapayapaan would be an additional force for the campaign for peace.

In separate statements read during the launch, Bishop Sergio Utleg of Tuguegarao, Bishop Arturo Bastes of Sorsogon, Bishop Gerardo Alminaza of San Carlos, Negros Occidental and Bishop Jose Cabantan of Malaybalay, Bukidnon called on both parties to go back to the negotiating table and address the root causes of the armed conflict.

Fr. Ben Alforque, MSC, spokesman of Kapayapaan, said, “The price of war has been incalculable…Listen to the anguish of men and women.”

Alforque said the poor and the marginalized suffer most under the current system. “When the people’s rights are violated, there is no peace,” he said.

Among the major agreements signed were the The Hague Joint Declaration, the Breukelen Joint Statement, Joint Safety and Immunity Guarantees (Jasig), agreement on the ground rules for the conduct of meetings, ground rules for the Reciprocal Working Committees and the Comprehensive Agreement on Respect for Human Rights and International Humanitarian Law (CARHRIHL).

The CARHRIHL, the first substantive agenda item in the peace talks, was signed in 1998 by former President Joseph Estrada. Ocampo said the CARHRIHL was praised as a breakthrough and landmark agreement by the European Parliament and the European Commission. 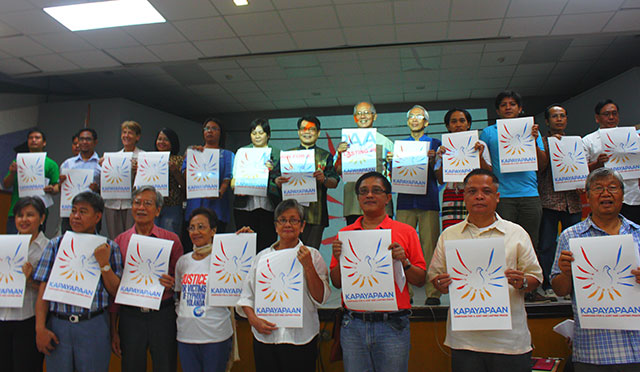 Ocampo lamented that the GPH violates three of the most important agreements.

Second is the The Hague Joint Declaration (THJD), which sets the framework and the four substantive agenda items in the peace talks. Ocampo said the GPH called the THJD a “document of perpetual division.” He added that the GPH would also insist, on several occasions, that the Philippine Constitution be made as the framework for the talks. This, he said, is contrary to what is stated in the THJD. Under the international law, the NDFP enjoys a belligerent status, meaning it has its own organs of political power, territory and army.

Third is the Jasig which the GPH violated through the detention and filing of common crimes against 15 NDFP consultants. Ocampo said the Jasig remains in effect despite the declaration of the GPH that it is inoperative. Citing the effectivity provisions of the Jasig, Ocampo said Jasig may only be terminated after 30 days if either party issues a written notice on the termination of Jasig.

“These 17 agreements would be put to waste if these would only be violated,” Ocampo said.

Piya Malayao, secretary general of the Kalipunan ng mga Katutubong Mamamayan sa Pilipinas (Kamp) and a Bontoc-Igorot from the Mountain Province, discussed the historical oppression and exploitation of the Igorots and other indigenous peoples in the country.

Malayao said the plunder of natural resources by foreign corporations and the neoliberal policies of the government worsened the poverty and social injustice experienced by the Filipino people.

“Without addressing the roots of the armed conflict, there can be no peace,” Malayao said.

Response from the NDFP

In his statement, NDFP negotiating panel chairman Luis Jalandoni, said the NDFP is willing to hold informal talks with the GPH without any precondition.

The NDFP added it is ready to negotiate with the GPH regarding the second substantive agenda in the peace talks, the socio-economic reforms.

Kapayapaan convenors said they asked both the GPH and the NDFP to send their messages for the launch.

Lorena Santos, one of the emcees during the program, said the Office of the Presidential Adviser on the Peace Process (Opapp), has not replied to the request of Kapayapaan.

Edita Burgos, mother of missing activist Jonas Burgos and one of the convenors of Kapayapaan, said the network would launch signature and education campaigns for their three main calls in the coming months. The three main calls of Kapayapaan are: Resume the GPH-NDFP peace talks. Honor all previously signed agreements. Address the roots of the armed conflict.

A peace caravan is also slated on September 21, the International Day of Peace and anniversary of the declaration of martial law in the Philippines.