The protesters said that no amount of reports or studies could cloak the workers’ slide into worse conditions, and the more appalling poverty in urban poor communities where they also live.

MANILA — Workers and urban poor in Makati and Pasay cities brought empty plates, spoons and forks to dramatize the effect of low wages during a protest action held today July 16 in front of the Philippine Institute on Developmental Studies – National Economic Development Authority (PIDS-NEDA) offices in Amorsolo St., Makati. The protesters took issue with the government agency’s recent statements attacking the minimum wage and casting it as an impediment to employment in the country.

PIDS-NEDA has recently released a report advancing such a conclusion in “Labor Policy Analysis for Jobs Expansion and Development,” written by Vicente Paqueo, Aniceto Orbeta, Leonardo Lanzona and Dean Dulay. Also, in a presentation of PIDS Economic Policy Monitor Seminar three months ago (April 3, 2014), it said: “The case of Minimum Wage is, generally, not only unhelpful but highly detrimental to the welfare of the common man and the disadvantaged.”

Unionist Gabby Delos Reyes from Wyeth Philippines Progressive Workers Union (WPPWU) said in a statement that workers today including those in the gleaming business district of Makati and Pasay cities are in need of a living wage. He said the current minimum wage is not enough for the day-to-day needs of Filipino families. 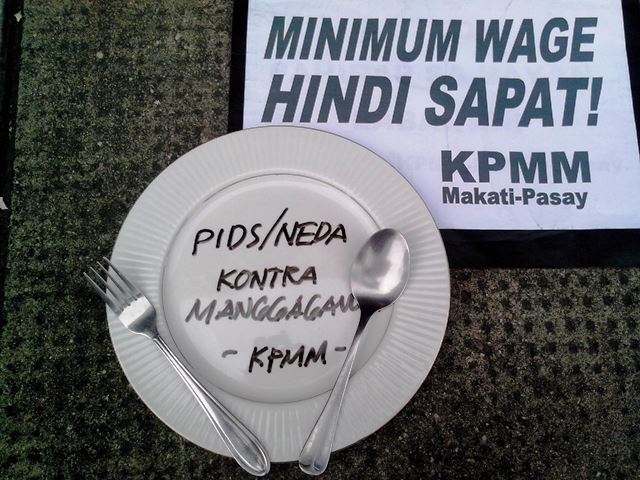 Yet, a government thinktank has all but claimed that the minimum wage should be weeded out. “This implies that the government is in a campaign to stamp out any demand for wage increase, and to further dampen current salary levels,” Delos Reyes said.

“There is not a single iota of truth in this report. And this is clearly a part of a bigger government scheme to pose the country as the cheapest and most flexible source of labor. We heard this from President Aquino himself when he stepped into office. . . and we condemn such an anti-worker position,” said Lito Cobrado of Malayang Samahan ng Manggagawa sa Mead-Johnsons (MSM-MJ). 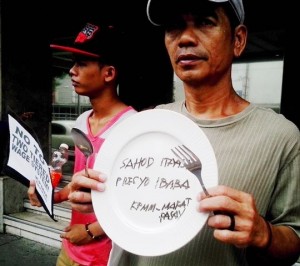 The unionists gathered for an hour-long “lunch-break protest” armed with empty plates. According to the organizers led by KPMM (Koalisyon ng Progresibo at Makabayang Manggagawa) chapter in Makati and Pasay, this lunchbreak protest symbolizes the increasing market prices of basic commodities especially rice, garlic and ginger, amid lower wages. KPMM Makati-Pasay is supporting the call of workers for the passage of Congressional Bill on the P 125 across-the-board increase for private corporations nationwide. The group is also a member of the Taxpayers Alliance Against Pork Barrel System (TAXAPO).

They said that no amount of reports or studies could cloak the workers’ slide into worse conditions, and the more appalling poverty in urban poor communities where they also live. 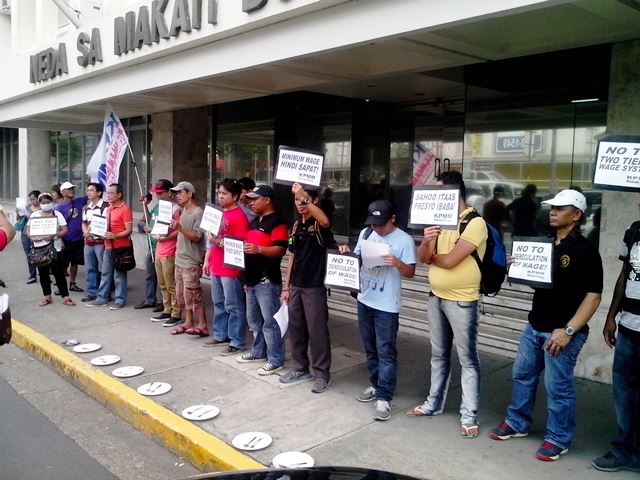 “Minimum” Wage-fixing in the Philippines has, for 25 years now, been under the Wage Rationalization Law that created the Regional Wage Boards. It determines the “minimum” wage levels in their designated region and industries. The labor center Kilusang Mayo Uno said, in an earlier picket July 1 in front of the Labor Department in Intramuros, that since the “wage rationalization” was implemented under the first Aquino government, workers received only meager adjustments. As a result, over the years, the gap between the minimum wage and the family living wage has widened. As such, they claim the workers of today are more oppressed, exploited and destitute.

A May 2013 study of independent think-tank Ibon Foundation shows that the gap between the minimum wage in Metro Manila and the family living wage has increased by 108.7 per cent since March 2003. 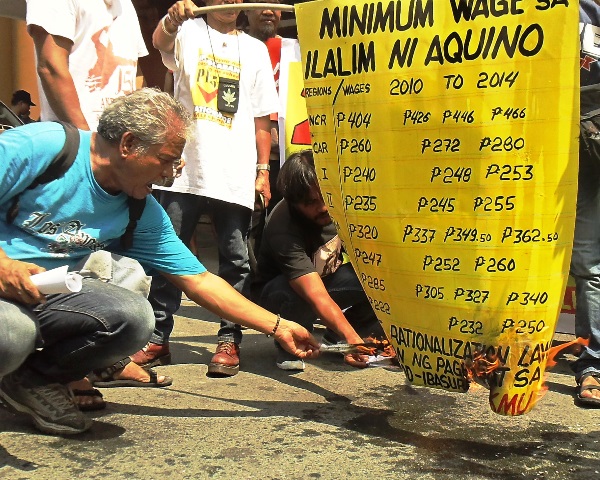 Another study by labor NGO Ecumenical Institute for Labor Education and Research, which uses 2006 Consumer Price Index, shows that the cumulative increase of P62 ($1.40) in the minimum wage in Metro Manila since Pres. Benigno Aquino III assumed office did little to improve the workers’ purchasing power.