Huge chunk of DAP did not benefit the poor – think-tank

“In qualitative terms, the DAP as a whole did not meet stimulus standards of immediately and significantly creating jobs, raising incomes, and stimulating local economic activity.”

Ibon Foundation assessed the DAP projects using the Department of Budget and Management (DBM)’s definition of DAP: a stimulus package to fast-track public spending and push economic growth by investing on high-impact programs, projects and activities.

According to the reseach group, 33.2 percent of DAP projects had no impact on the economy, 11.9 percent had low impact, 53.1 percent had uncertain impact and a mere 1.7 percent of the DAP created jobs.

Jose Enrique Africa, executive director of the Ibon Foundation, said, “In qualitative terms, the DAP as a whole did not meet stimulus standards of immediately and significantly creating jobs, raising incomes, and stimulating local economic activity.” 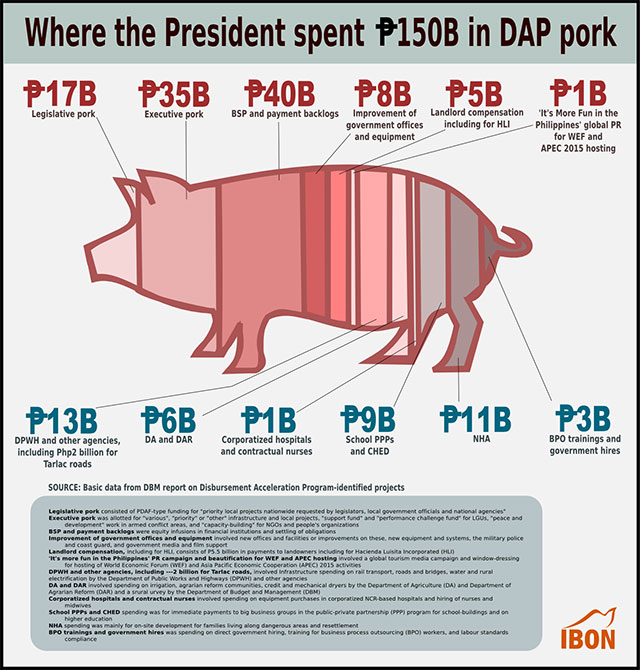 Africa said unemployment and underemployment did not improve from 2011 figures, the year the DAP was implemented. In 2011, there were 4.37 million unemployed and in 2013, the year the DAP was terminated allegedly due to its success, jobless Filipinos even increased to 4.49 million. The same goes with underemployment. From 7.16 million in 2011, it went up to 7.32 million. Poverty incidence remained at 25.2 percent in 2012, Africa said.

Africa pointed out that it is wrong to call DAP as a stimulus program, saying it is not an addition to the budget but only an acceleration of government spending.

One-third of the DAP or Php49.8 billion went to virtually no-impact spending – consisting of equity infusion or payments to financial institutions, landlords and big business, Africa said. He cited the P30-billion DAP fund that went to the Bangko Sentral ng Pilipinas (BSP) as one of the examples of no-impact projects. He said that a check with the BSP annual reports revealed that only P31 million or 0.1 percent of the total amount received by the BSP was given as credit to small and micro entrepreneurs. 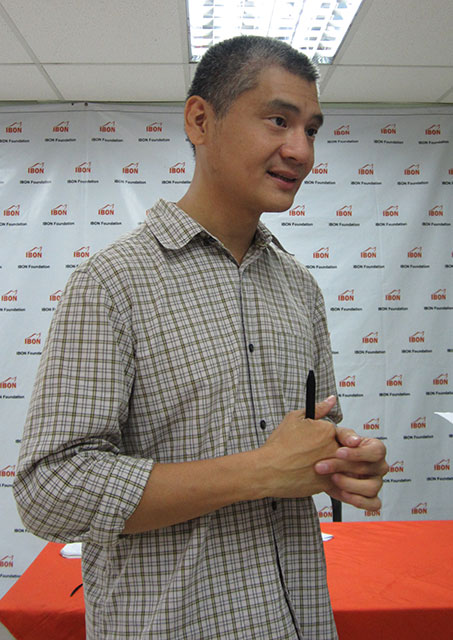 Twelve percent of the DAP went to low-impact spending, Africa said. These included the P10.4 billion of DAP used to pay for foreign services, foreign goods and equipment. One of these is the P450-million Jalaur River multipurpose project. Africa said the amount was used as an initial payment to Korean corporations for the pet project of Senate President Franklin Drilon.

The P500-million DAP fund for the Department of Tourism (DOT) was used for its global advertising campaign, Africa said.

The Ibon Foundation also assailed the spending of P7.56 billion to upgrade government structures and facilities. This, Africa said, has not benefitted the poor.

The independent think-tank said that almost half (45.1 percent) of the DAP clearly went to no- or low-impact spending. Ibon cited the P53.2 billion of the DAP that went to legislative and executive pork barrel projects. Ibon said these projects of uncertain impact include at least Php35.2 billion in lump sums for “other”, “various”, “local” and “priority” infrastructure projects nationwide, P7 billion for LGUs, P10.9 billion for “peace and development” projects, and others.

Only P2.49 billion of the DAP was used for job creation, Africa said. Of the amount, P1.3 billion was used for the expanded government internship program, P861 million for hiring non-uniformed personnel of the Philippine National Police and P294 million for the hiring of nurses and midwives.

“The general pattern of DAP spending is not consistent with a stimulus package designed to address the country’s most urgent socioeconomic problems,” Africa said. He said if the government wanted to stimulate the economy, it could have prioritized labor-intensive rural infrastructure projects.

Africa said the pattern of DAP spending confirms the dangers of centralizing decisions for projects in the office of the president and select Cabinet members. “The executive unilaterally decided on DAP spending, violating the existing budgetary processes,” Africa said.