“We will have an election budget filled with lump sums and one that does not adequately address social development.” – Leonor Briones, former national treasurer

MANILA – When former National Treasurer Leonor Briones was 16 and studying statistics, she remembered her Harvard-educated professor telling them, “Figures don’t lie, but liars figure.” Now 73, she has already retired from a long career in public service but, as she remarked in a media briefing on President Aquino’s proposed 2015 budget, this is what happens when old people still get involved.

She began her discussion with a clarification on President Aquino’s claim of a three-point drop in poverty rate during his 5th State of the Nation Address. Noting that the basis of computation was changed, she said, “Don’t compare two figures with different assumptions.”


She avoided making politically charged conclusions despite insistent media questions, preferring to challenge the media and the public to draw their own conclusions because, she said, she has to keep close to what figures say. And based on their study of the 2015 National Expenditures Program, the figures in Malacañang’s proposed 2015 budget are already worrying.

Power of the ‘coin purse’

Budget deliberations in Congress have entered its second week and legislators especially from the progressive partylist bloc have already pointed out certain details bedeviling Malacañang’s proposed 2015 budget. These include, so far, the persistence of pork under various guises; the seemingly built-in danger that budgets approved by Congress could be transformed into pork; the suspicious allocations that could be diverted to the campaign kitty of the ruling party for the 2016 elections; the budget’s seeming design to once more declare “savings” prematurely; and the fact that also built-in with this budget are plans to worsen debt dependence.

In the budget briefing convened by Briones with Social Watch Philippines, of which she is the lead convenor, they higlighted more “vulnerabilities” (to fund misuse) in the budget. These stem from lump sum appropriations, which fall under the discretion of the executive alone, and as such are considered pork.

In fact, the P2.606 trillion ($59.73 B) proposed budget does not reflect the whole picture, according to Briones. Adding all up, the projected 2015 expenditures would amount to P2.758 trillion ($63.214 B), or higher, if the P123 billion ($2.82 billion) Unprogrammed Appropriations, and the P29 billion ($665 million) off-budget accounts and direct remittances from the Philippine Gaming Corporation (PAGCOR) and Philippine Charity Sweepstakes Office (PCSO) are included. Funds that could be spent by the Executive could even be higher because the direct remittances may be higher, she added. These two slabs of pork, divided into chunks which showed drastic increases, are not to be looked into by Congress at all. (See chart, Aquino’s Unprogrammed Funds for 2015, which are not in the P2.606 trillion [$59.73 B] submitted to Congress)

On top of amounts undeclared in Aquino’s proposed appropriations, in the P2.606 trillion declared proposed budget, Briones pointed to “pervasive” lump sums and automatic appropriations which, she said, render the budget vulnerable as these sums have limited transparency and accountability.

Briones expressed pity for the lawmakers, saying its power of the purse has diminished through the years. From her discussion, only about P600 billion ($13.752 billion) of the entire proposed national budget would be subject to the lawmakers’ scrutiny.

In sum, out of the proposed expenditures of P2.758 trillion ($63.214 billion), Congress would only deliberate less than half of it in detail, amounting to P1.361 trillion ($31.2 budget) of government agency budgets, of which P761.231 ($17.45 billion) are for Personal Services, which traditionally the Congress does not debate on. Meanwhile, P866.231 billion ($20.312 billion) will be automatically appropriated, Briones said.

Lump sums, pork in the budget

In Malacañang’s proposed 2015 budget of P2.606 trillion, the General Appropriations Act (GAA) to be approved by Congress would amount to only P1.740 trillion ($39.9 billion) or two thirds of the submitted budget. This is the amount for which Congress will spend four months of committee hearings and debate, Briones said. But of this, only P1.361 trillion ($31.2 billion) in agency budgets will fall under Congress’ scrutiny. Minus Personnel Services, this would amount to only P600 billion ($13.752 billion.) As such, less than a quarter of the president’s proposed budget would be under congressional inquiry.

The President’s Special Purpose Fund, or what is commonly referred to as the President’s pork, comprise the first significant lump sum appropriation in his proposed budget. At P378.603 billion ($8.68 billion), it is 34 percent bigger than this year’s P282.569 billion ($6.48 billion). 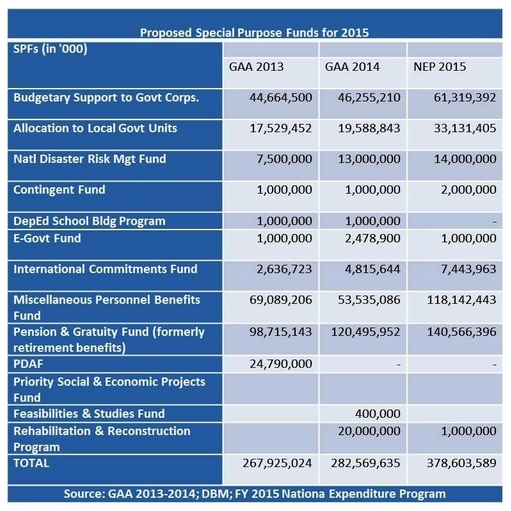 Under this pork, Aquino proposes to increase Budgetary Support to Government Corporations from P46.26 billion to P61.32 billion ($1.06 billion to $1.41 billion).

“Miscellaneous Personnel benefits Fund increased dramatically from P53.53 billion ($1.23 billion) to P118.142 billion ($2.71 billion) for 2015,” Briones said. She finds the doubling in this fund “interesting,” saying that this fund has been proven “overstated” before, when the Aquino administration sourced some funds for Yolanda from here.

“Did the number of elderlies suddenly increase?” asked Briones.

These increases in lump sum allocations for towns and provinces constitute one of the reasons why the Makabayan bloc and Briones of Social Watch Philippines believe that the 2015 proposed budget is an “election budget” for the ruling party.

This is on top of the allocation for bottom-up budgeting renamed as GPB (Grassroots Participatory Budgeting) which, in a separate critique, Kabataan Partylist Rep. Ridon said also has provisions similar to the Disbursement Acceleration Program (DAP). Social Watch Philippines made no note of the GPB.

These funds are distinct from the Internal Revenue Allotment (IRA), which is under automatic appropriations. Aquino proposed an increase in the IRA from about P341.544 billion ($7.829 billion) this year to P389.860 billion ($8.94 billion) for 2015.

The year 2015 is the year before elections. While the government routinely increases expenditures, the increase in pre-election year is “not normal,” Briones noted. The areas with significant increases in the budget happen to be areas where politicians benefiting from it can make “pakitang gilas” (impressive show).

After years of studying public finance, Briones said there is a pattern of larger spending every pre-election year. In a year like 2015, she says the politicians would strive to implement projects, distribute money and other gifts. Looking at where the 2015 budget shows significant increases, Briones concluded that “This is definitely an election budget.”

Another lump sum allocation not scrutinized by Congress, said Briones, are the Unprogrammed Funds, which amount to P123.056 billion ($2.820 billion). Aside from the IRA, the Automatic Appropriations calculated at P866.231 billion ($19.854 billion) contain other significant items such as Debt Servicing (P372.863 billion or $8.55 billion).

Among the “Unprogrammed funds” are the controversial sources of pork such as Malampaya funds and Motor Vehicles Fund.

On Debt Servicing, Briones noted that while the government is planning to borrow a total of P700.822 billion ($16.1 billion) from local and international sources, it will only receive P310.435 billion ($7.12 billion) due to the costs of borrowing and other charges.

Kabataan Partylist Terry Ridon questioned in previous budget hearings why the Aquino fiscal program is premised on perpetuating debt dependence, and not in breaking its vicious cycle. Briones added that lawmakers should in fact look more closely into the automatic appropriations for debt servicing, saying experience had shown that it is “usually overstated by the Executive as a means to liberally move around funds in the budget,” since it is automatically appropriated, anyway.

In 2014, the legislators’ pork barrel was inserted – around P21 billion ($481.3 million) of the P24 billion ($550.1 million) pork, according to reports – in the budgets of government agencies such as the Department of Social Welfare and Development (DSWD) and the Department of Public Works and Highways (DPWH).

Two examples of these cases were mentioned in last weeks’ budget deliberations in Congress when Higher Education Sec. Patricia Licuanan and Health Undersecretary Janet Garin talked of billions of funds placed in their agencies for projects of lawmakers.

In 2015, the lawmakers’ pork has grown to P90 billion ($2.1 billion), Prof. Briones said, recalling that she personally witnessed how some congressmen were hastening to submit their list of “recommendations” (infrastructure, education, etc., projects) to beat the deadline.

“This is what (ACT Teachers’) Congressman Tinio said when he showed an example of a form to be filled up with recommendations. It has no letterhead, just blanks for lists from Congressman so and so,” said Briones.

“It wasn’t official, there is no paper trail, it’s not in the budget, but Congressmen like Tinio and several others confirmed it,” said Briones. She added also that it is something the lawmakers know among themselves.

In a separate statement on Malacañang’s proposed budget for the Department of Public Works and Highways (DPWH), Kabataan Partylist Rep. Ridon noted that the DPWH is asking for a higher budget, almost P332 billion ($7.61 billion) from this year’s about P282 billion ($6.5 billion). And yet, Ridon said, the DPWH has a “low absorptive capacity,” bringing rise to the question whether its proposed budget is designed to produce “savings,” which Malacañang would seize in 2015 for projects of its own choosing. 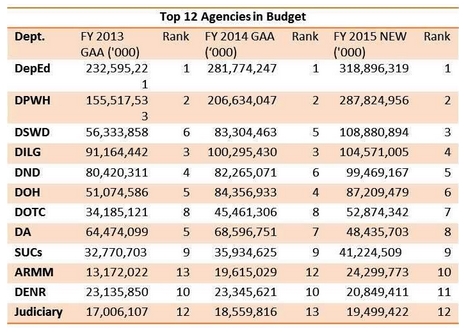 Asked if the 2015 budget submitted by Pres. Aquino is designed to generate “savings,” Prof Briones told Bulatlat.com that indeed, “it is very possible” some items in the budget will be declared as savings.

There are now three bills in Congress on changing the definition of “savings,” to circumvent the Supreme Court ruling declaring the DAP as unconstitutional. She said these included Rep. Ben Evardone’s bill, Sen. Chiz Escudero’s bill, and the Department of Budget and Management Bill.

But, she added, if a lot of “savings” would be declared in 2015, this would show Malacañang’s inefficiency. “Palace makes the budget then says overestimated pala,” said Briones.

Bayan Muna Rep. Neri Colmenares has previously warned that the Philippines may have two budgets as a result of Aquino’s insistence on using his definition of “savings” despite the SC ruling against it. One of the budgets, the official one, is the GAA; the other budget is the executive’s version after declaring “savings” here and there from the GAA-enacted budget and then realigning the funds.

Prof. Briones said the decision to allow that lies with the Congress, “at a time when balance of power is considered very sacred and the lawmakers themselves are seeing how their dignity is being eroded.”

A budget that allocates differently from what it claims

In presenting their proposed budget, President Aquino said it is geared to address poverty. But in the study of Social Watch Philippines, said Briones, regional allocations to major islands show great disparities and do not back up the government’s declarations of spending for social development and the poor.

The majority of the budget, at 63 percent, still goes to Luzon.

Visayas and Mindanao where the poorest live receive only 16 percent and 21 percent respectively.

“The budget also falls short in prioritizing sectors of development, like health, employment, and the sciences,” observed Briones.

Unemployment and underemployment are still at record levels under the Aquino administration despite claims of economic growth. According to the Labor Force Survey, underemployment decreased to 18.2 percent or 7.03 million Filipinos in the second quarter of 2014 from 7.1 million or 19.5 percent in January 2014. But, according to Briones, this data is understated because these excluded Leyte, a Typhoon Yolanda-affected province.

Toward the end of the briefing on Aquino’s proposed budget, Briones challenged Congress to reclaim the power of the purse. She aired her group’s demand for a special audit on the Special Purpose Funds and other lump sums to establish transparency and accountability on use of these funds.

“We need to remove vulnerabilities in the budget disguised as a need for Executive flexibility,” Briones said. She warned that next year, “We will have an election budget filled with lump sums and one that does not adequately address social development.” She asked Congress to do its duty to serve the people, prioritize what needs to be prioritized, and reclaim the balance of power in government, something that is an important component of our democracy.