Attack on job security begins after Nestlè takeover of Wyeth

“We are calling for reinstatement because we should not have been dismissed in the first place. We are calling for regularization because we deserve to become regulars for the years of hard work we rendered to the company.” – Jhondel Estabaya, 33, president of SAMA-Ako (Samahan ng Manggagawang Kontraktwal) in Wyeth.

MANILA – For years, activists have called on consumers to boycott Nestlé milk and coffee products saying that these have been tainted with blood, figuratively speaking, due to Nestlé’s alleged blood debts to unionists. Nowadays the global food giant is expanding and it has bought into Wyeth. In the Philippines, Wyeth claims to be the maker of the no.1 baby formula milk. With a workforce of more or less 1,000, it produces baby milk brands such as Promil, Bonna, Bonakid, S-26 and Bonamil.

The two-year “protection” that seems to have covered most of Wyeth workers since it was taken over by Nestlé is nearing its end. Rico Dimaano, 39, a quality assurance inspector in Wyeth and union president of its rank and file union, told Bulatlat.com that as of now, contractualization is more rampant in Nestlé (compared to Wyeth). There are work lines in Wyeth, such as packaging, engineering and maintenance, that are still maintained by regular workers. In Nestlé these lines are already being handled by agency (contractual) workers.

Now there is talk of “alignment” of work positions, according to Dimaano. Since September last year, Nestlé and Wyeth conducted an audit of contractual and temporary positions in Wyeth. The Wyeth Philippines Progressive Workers Union, a local union of the Drugs and Food Alliance (DFA) under Kilusang Mayo Uno, noted that Nestlé has been outsourcing work positions it considers as “non-core” to manpower agencies.

Since Nestlé took over Wyeth, the union here also noted that it has guarded more zealously the ranks of regular workers, and is stricter when it comes to temporary and contractual workers.

Contractual Wyeth workers formed their organization Samahan ng Manggagawang Kontraktwal or SAMA – AKO on April 9 this year and filed for regularization before the National Labor Relations Commission on May 18 and 22 because they feared the Nestlé takeover would result in their termination.

Indeed, some 87 contractual workers mostly in sanitation of Wyeth were terminated from May to June this year. They have worked an average of eight years in the company. The termination came six months after Nestlé started conducting an audit of Wyeth Philippines’ contractual and temporary positions, and just after the longtime contractuals filed a case in the Calamba office of the National Labor Relations Commission seeking their regularization.

In a picket this Wednesday (Oct. 22) at the offices of the National Labor Relations Commission in Calamba, Laguna, Elmer “Bong” Labog, chairperson of Kilusang Mayo Uno (KMU), denounced as “revolting” Wyeth Philippines’ refusal to regularize its many long-standing contractual workers and its illegal dismissal of the said workers. He calls it a “double whammy” on workers job security.

“We are calling for reinstatement because we should not have been dismissed in the first place. We are calling for regularization because we deserve to become regulars for the years of hard work we rendered to the company,” said Jhondel Estabaya, 33, president of SAMA-Ako (Samahan ng Manggagawang Kontraktwal) in Wyeth.

Before his dismissal, Estabaya has worked with Wyeth’s sanitation for 10 years and six months. His job included making sure the equipment used in every stage of production of Wyeth baby milk products are clean.

SAMA – AKO in Wyeth said they are performing functions that are necessary and desirable to Wyeth Philippines’ usual business, since they ensure that the milk produced by the company are clean and safe. Based on the Labor Code, workers whose performance are found satisfactory after a fixed period of probation on a job that is necessary and desirable for the company’s business ought to be regular on that job.

But Wyeth Philippines seems to have skirted that by using manpower agencies and cooperatives, which, on paper, employed the contractual workers. In reality, these workers render continuous work for Wyeth.

When Estabaya, for example, applied for a job through a cooperative in 2003, he was told from the start that he would be working in Wyeth. It was his first job. He hailed from Sorsogon. He used to work for an aunt who later found a job abroad. He worked next in the bakery of another aunt, but it was not selling bread fast enough to earn. So in 2003, he applied for a job and that was how he came to work for Wyeth. 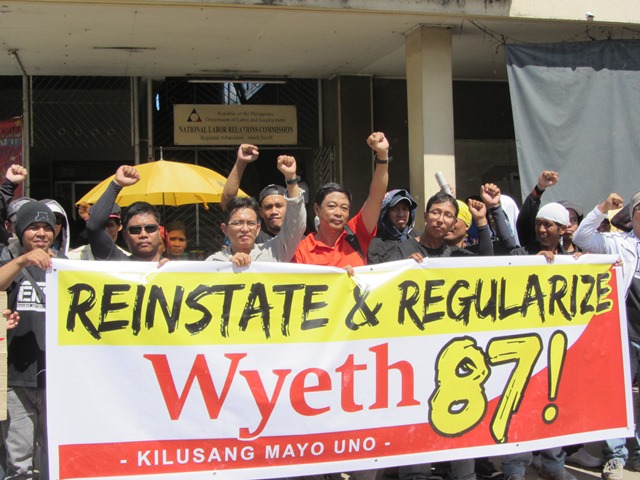 After more than 10 years on the job in one of the most profitable milk companies, Estabaya was still receiving the prescribed minimum wages for Region 4-A.

SAMA – AKO in Wyeth was formed April 9 this year after a lapse in maintenance was summarily blamed on all 13 contractual workers assigned in the area.

Estabaya said job termination is a yearly occurrence among contractuals in Wyeth. But many contractuals have worked continuously for the company for years that they now have an average of eight years length of service, so their regularization on the job has become a paramount issue.

After Nestlé audited the contractual and temporary workers in Wyeth, the dismissals of longtime contractual workers followed. Estabaya said in his speech during their picket in front of NLRC this Wednesday (Oct. 22) that the global food giant is trying to evade responsibility and accountability in complying with the Labor Code and regularizing them on the job.

SAMA – Ako views the termination of 87 longtime contractual workers as without basis. “We were told to go to our cooperative, which told us that we failed our evaluation.” Estabaya said.

Jennifer Competente, 33, warehouse receiving clerk in Wyeth, said she was on maternity leave until March this year, but she was no longer allowed to go back to work by April this year.

While some of the longtime contractuals like SAMA-AKO-Wyeth president Estabaya was under a cooperative who did not even issue him yearly contracts, others were under agencies.

Two cooperatives and four agencies supply Wyeth with workers. The agency workers get one-year contracts, which are renewable. The same agency renews the same workers’ contract, further giving weight to their demands to be regularized.

Leny Regino, 29, worked for Wyeth for more than eight years, under two agencies. She was one of only four female members of SAMA-AKO in Wyeth. She was forced to go back to her family in Quezon after she was dismissed on the job in May. She used to rent a room near her work, and just send whatever she could save to her family but now she comes to Calamba only when SAMA – Ako has activities.

When the fired contractual workers demanded to see the evaluation cited for their dismissal, Estabaya said, the cooperative had nothing to show them. When they asked who evaluated them, the cooperative also had no answer.

If not for contractualization, the 87 longtime Wyeth contractual workers should have been regularized years ago and as such, they should have been part of the established union in Wyeth Philippines. But as it is, the president of Wyeth Philippines’ rank and file union worries that their efforts to correct the ongoing violation of workers’ rights will further face difficulties ahead.

“Contractual workers should not be barred from joining unions. Workers’ organizing should not be hindered just because they are contractuals,” Dimaano said in a speech during the picket of so-called Wyeth 87 in front of NLRC.

Dimaano, president of Wyeth Philippines Progressive Workers’ Union, said it must have been clear to Nestlé as well after their audit that these workers’ positions should have been regular.

With the “alignment” of Nestlé and Wyeth, in a condition where there are more regular workers than contractuals in Wyeth compared to Nestlé, it appears that the longtime contractual workers are just the first on the firing line.

Dimaano calls on all workers to continue holding mass actions “against actions like these by capitalists and this Department of Labor and Employment, which doesn’t defend us but legalizes contractualization.”