You Are Here: Home → 2014 → November → 11 → Tens of thousands of survivors gather in Tacloban to demand justice

Tens of thousands of survivors gather in Tacloban to demand justice

“We are angered that it is the survivors whom they accuse as liars. After we were robbed, neglected, driven away from our land and jobs, the government tells us that it is our fault. In our name they amass funds and they commit more crimes to exploit these funds.”

TACLOBAN CITY — Survivors of storms, earthquake and military siege held a mammoth rally in this city November 8 to mark the first year since supertyphoon Yolanda hit these parts the hardest. Estimates put their number from 22,000 to 25,000. Many of them stayed at the city’s Astrodome the night before, after a concert and a day of activities dubbed as “first wave” of protests.

Protesters held a fluvial protest, a program at UP Tacloban, a program in Samar followed by a march with torches across San Juanico Bridge, the longest bridge in the Philippines. The Nov. 8 protest for justice for Haiyan victims capped a week of activities across Eastern Visayas, including the arrival and conferences here of survivors of disasters and militarization in Bohol, Zamboanga and other parts of Mindanao and Metro Manila.

International delegates of women from Gabriela also integrated with Haiyan victims and probed the complaints about not receiving the donations sent in by donors, as well as the policies that compounded the misery rather than help the survivors. These include cases of allowing mining in devastated areas, increasing deployment of military, accusing and intimidating citizens critical of Aquino’s policies and handling of post-Yolanda efforts, and cases of using government’s meager aid such as CCT (conditional cash transfer) or 4Ps to dissuade the people from joining People Surge, or voicing out complaints against threats of renewed demolition amid a beautification frenzy for the upcoming papal visit.

The Eastern Visayas-based alliance of survivors People Surge, formed two months after Yolanda, has been joined this week by survivors of other disasters in the country. Typhoon Sendong Survivors Collective, Barug Katawhan (Stand up People), Indug Katawhan, Balsa Mindanao, Bangon Zamboanga, Bangon Bohol and other supporting peoples organizations such as organizations of health workers and urban poor based in Metro Manila have formed the national alliance of survivors called Daluyong, a Filipino word which is understood in many regions as referring to a huge wave. 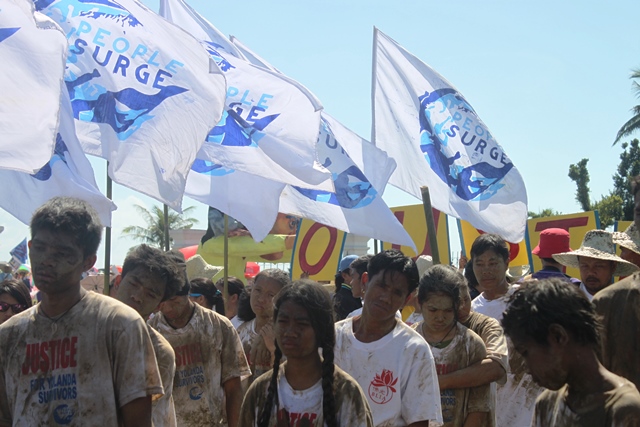 In a national conference of disaster survivors early this week, they noted common trends in the aftermath of disasters: one, the people largely fend for themselves in times of disasters, and take charge of their rehabilitation; two, that in the guise of rehab and relief the government and business groups only use disasters to make more money and entrench themselves in politics; and three, if survivors demand their economic and political rights for relief, rehab and a say in all of it, they get maligned, harassed and worse, murdered, as in the case of People Surge’s two volunteers and some leaders of Barug Katawhan.

Daluyong brought at the protest an effigy of President Benigno “Noynoy” Aquino III, who they branded as “Waray pulos,” (no use). They burned Aquino’s effigy at the conclusion of the program.

The mainstream media quoted President Aquino, DSWD Sec. Dinky Soliman, and DILG Sec. Mar Roxas reciting figures of what they supposedly gave to Yolanda survivors. But at the protests in Tacloban City, and in Samar the day before, the survivors consistently questioned and disputed these claims, and criticized Aquino’s “cowardice” in fleeing from the gathering of the organized survivors.

Stand-up comedian and former Aquino campaigner Mae Paner, aka Juana Change, publicly announced her mistake at having believed and campaigned for Aquino. She described President Aquino now as heartless and unconcerned. She joined the rally at Tacloban without her usual caricaturist costume. She said during the program, “Noynoy Aquino, mayroon kang maling ginawa. Kaya kami nandito. (Noynoy you did something wrong that’s why we’re here.)”

Juana Change voiced the messages that the leaders of survivors’ organizations have been saying in different activities during the week. She also attended the earlier conference of survivors of disasters in the country. “You need not hold rallies; you don’t have to demand for relief; these should have been given to you outright,” she said at the program in Tacloban.

On the first anniversary of Yolanda, the survivors’ demand for justice is fueled by love, Juana Change said. Love for those who died and those who survived. “If you didn’t receive help, why not fight? Why be content?”

“We are angered that it is the survivors whom they accuse as liars. After we were robbed, neglected, driven away from our land and jobs, the government tells us that it is our fault. In our name they amass funds and they commit more crimes to exploit these funds,” Crisostomo said at the program.

Bayan Muna Rep. Neri Colmenares asked: “What kind of government is this? They have completed only one percent of the houses that need to be built and still they castigate the people for complaining too much.”

About the Aquino government’s so-called rehabilitation plan finalized only a week before the first year commemoration of the day Yolanda hit the country, Elmer “Bong” Labog, chairman of Kilusang Mayo Uno, said only big capitalists and Aquino stand to benefit from its components, such as the already much criticized No-Build Zone.

“It seems Aquino is now ‘touched’ by the plight of Yolanda survivors, Labog said. “But even these are not really for the survivors”.

“If Aquino is suddenly in a construction frenzy in Tacloban, it’s because he has to have a showcase for donors. Some of them are now asking where the money went. The government must have something to show to donors in time for various international meetings next year,” Labog told the gathering of survivors.

The disaster survivors trace the increasingly devastating storms to policies prescribed by international creditors and adopted by the Philippine government. These policies supported and liberalized mining, logging and expansion of plantations, which severely reduced the environment’s ability to absorb rainfall and mitigate waves and floods.

These policies also rendered the farmers and workers who make up the majority of citizens poorer, and thus with little to no ability to prepare for disasters.

“Workers work increasingly harder and longer but get little wage or job security in return,” said Paul Escalona of KMU- Eastern Visayas. Forecasting more disasters to come, he urged all survivors of disasters to unite and act for justice, to participate in movements to change the political system.

“Something is wrong in the kind of government that prioritizes not the safety and welfare of its citizens but bigger profits for a few,” various speakers at the Haiyan program asserted.

Dr. Jojo Carabeo, spokeperson of the anti-reclamation alliance People’s Network for the Integrity of Coastal Habitat and Ecosystems (People’s NICHE), asked, “What kind of government do we have that doesn’t even seek to establish our own medicine industry and forces us to rely on imported medicines? What kind of government neglects, even attacks, its scientists?”

Carabeo noted the lack of healthcare, health services especially in the countryside, where majority of Filipinos live. Taken together, these conditions intensify the impact of disasters on Filipinos, the survivors had noted at their conference.

“A facet of Aquino’s deception we must not forget is his continuing disastrous militarization,” Bayan Muna Rep. Carlos Zarate told Bulatlat.com. In areas devastated by Typhoons Pablo, Sendong, Agaton and in Samar today are battalions of military deployed not for rehabilitation efforts but for plunder, Zarate said. He recalled that Aquino did not immediately send relief but instead deployed more military from the very first days of Yolanda.

Zarate added that these soldiers, including the thousands of US troops who came, had hardly helped the Yolanda survivors. On the contrary, he accused the US troops’ giant aircraft as the reason parts of Tacloban airport were wrecked. “It wasn’t built or designed with warplanes in mind,” he said. He added that the flotilla of warships immediately sent in by the US also did not help much, except for a few showcases of administering first aid.

Yet, Pres. Aquino and the DFA immediately used Yolanda as justification for the signing of the Enhance Defense Cooperation Agreement (EDCA) between the US and the Philippines.

For having done all these and for the combination of neglect and attack packaged as relief and rehabilitation, “Pres. Aquino fears to face the people, esp. the survivors who have banded together to form a national alliance,” Zarate said.

Aquino received insults from the survivors for having avoided Tacloban City when his administration marked the first anniversary of supertyphoon Yolanda (international name Haiyan). Zarate said that such action belies Aquino’s claims that storm victims have recovered.

“Aside from holding Aquino accountable, it is important also for survivors to grasp the role of capitalism in disastrous climate change,” Casiño of Bayan said at Tacloban.

“You aren’t victims but heroes because you survived over disasters wrought by the environment, the imperialists and Pres. Aquino,” Casiño told the survivors.