“From contract to contract, an untenured worker is threatened with unemployment and hence is forced to surrender entitlements labor have fought for and won in its long history of arduous struggle…”

MANILA – On the same day the government reported about “better quality jobs,” a new alliance of workers’ unions, associations, federations and individuals from the public and private sector launched a campaign demanding to make contractualization an illegal and criminal act. The campaign puts to question the government claims about generating quality jobs. 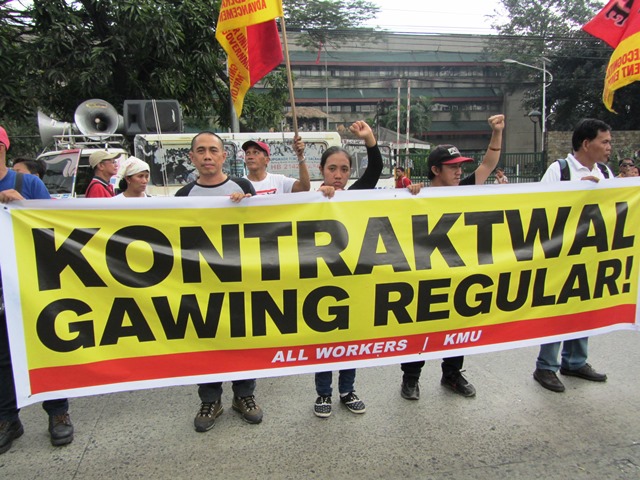 Arsenio Balisacan, Economic Planning Secretary and director general of the National Economic and Development Authority, said in a statement that “Employment figures for October 2014 revealed that better quality jobs were generated and unemployment dropped to its lowest in 10 years.” The higher employment posted by all major sectors (more than half or nearly 54 percent are in services) provided for Mr Balisacan “an optimistic outlook on the country’s economic performance” in the last quarter of this year.

But for workers the situation is far from cheery. In fact, the All Workers’ Unity (AWU) likens the growing trend of contractualization among the employed to a gun aimed at their head, forcing them to surrender their rights to decent pay and tenure. In a protest rally at the Elliptical Road in Quezon City last Friday (Dec. 12), they launched the campaign against the ‘criminal’ employment setup. Their coming together for this campaign is “a momentous occasion in the labor movement’s history,” said Kilusang Mayo Uno chairman Elmer “Bong” Labog. The campaign brings together workers and employees from private and public sectors, organized or individuals, from the cities and the countrysides, from industries, agriculture and services, employed or unemployed.

Contractualization of jobs is an employment setup where one gets a job for only a fixed time frame, usually less than six months per contract. Workers condemn it as the employers’ way of avoiding the eventual regularization of employees after six months on the job as prescribed by the country’s Labor Code. Being regular on the job means getting a relatively better wage and benefit package including leave with pay, job security and retirement benefits.

The AWU said more employees in the country today are in contractual jobs. They estimate that there is a prevalent ratio of 10-percent regular, 90-percent contractual labor in various enterprises, factories and offices.

Considering that contractualization seems to violate and circumvent the labor laws, Courage is alarmed that the government itself is “among the top culprits guilty of this crime against all workers.” Government offices itself implement contractualization, unionists affiliated with Courage said. 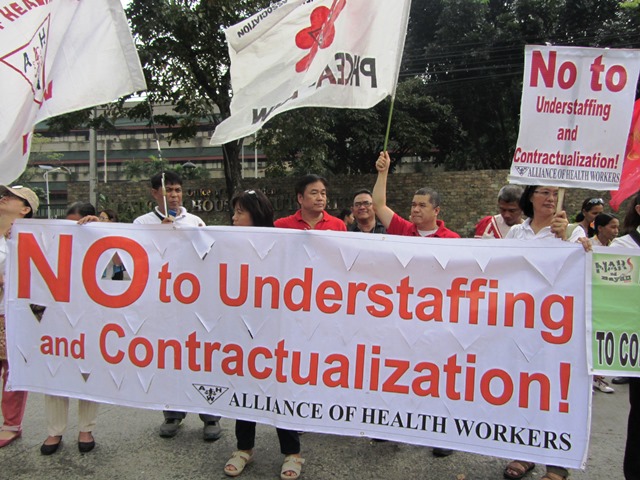 In government-owned Philippine Heart Center, for example, the employees’ union president said they are “full of contractual doctors, nurses, health workers.” The contractuals number almost as many as half of their current regular workforce.

Speaking before other members of AWU picketing at the Elliptical Road, Bonifacio Carmona, president of employees’ association in Philippine Heart Center, said the same trend of growing number of contractuals is happening also in other government hospitals.

Today, the hospital has nearly 500 contractuals working on plantilla positions or positions mandated to be filled.

The contractuals grew to this number and the setup of contractualization even worsened under President Benigno “Noynoy” Aquino III, Carmona said. What happened was, everytime an employee retires, he or she is replaced by a contractual rather than a regular.

Since Aquino became president, contractualization worsened with the implementation of “COS or contract of service,” Carmona said. Unlike the former type of contractualization implemented in government hospitals, employees under a COS have no benefits, no employee/employer relationship, and they can be fired anytime, Carmona added.

The Philippine Heart Center has employees who have been contractuals for years now.

In the Philippine General Hospital, Jossel Ebesate of Alliance of Health Workers said the “Job orders” being implemented there now also worsen the old form of contractualization and undercut the promised regularization of some contractual nurses who should have been regularized in the place of retiring plantilla nurses. 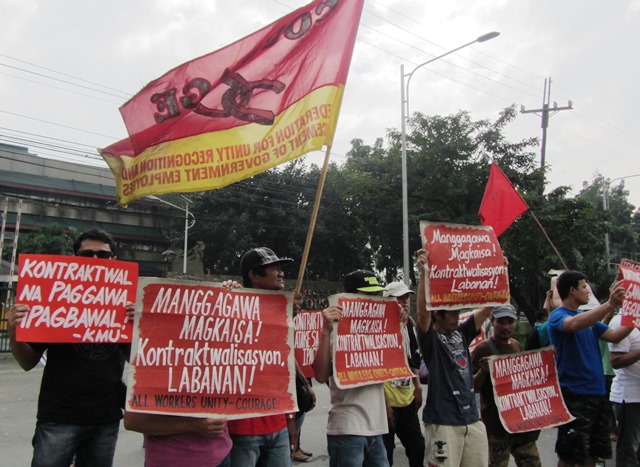 Gaite of Courage cited in addition “a glaring example” provided by the DSWD (Department of Social Welfare and Development). He said its 23,000 personnel complement is composed of 20,000 “Memorandum of Agreement employees” and only 3,000 are regular employees.

“From contract to contract, an untenured worker is threatened with unemployment and hence is forced to surrender entitlements labor have fought for and won in its long history of arduous struggle… From contract to contract he must compete in a shrinking job market until he has lost his ‘competitiveness’ and eventually joins the ranks of the bourgeoning army of unemployed,” Jossel Ebesate, chairman of Alliance of Health Workers, described the plight of contractuals.

Even amid the “better quality jobs” reported by NEDA for the past quarter, there are data that revealed the limitations of these jobs. The number of underemployed is still on the rise. In the recent NEDA jobs report, underemployment which shows the proportion of those who are already working but still need to find other jobs to earn more income, rose further to 18.7 percent (or approximately 7.3 million underemployed workers) compared to the 18 percent registered in October 2013.

The Members of Samahan ng Manggagawang Kontraktwal (SAMA-AKO) Wyeth Chapter who joined last Friday’s launch of the campaign against contractualization helped explain why the employed would opt for more work even when they are already beat from their jobs.

“No matter how many years a contractual worker gets renewed on the same job, he or she has little to no opportunity to defend what little wage hike he or she gets. Often, our wages also revert to the minimum rate when our contract expires and we move to another company,” a statement distributed by Sama-Ako Wyeth chapter said in Filipino. 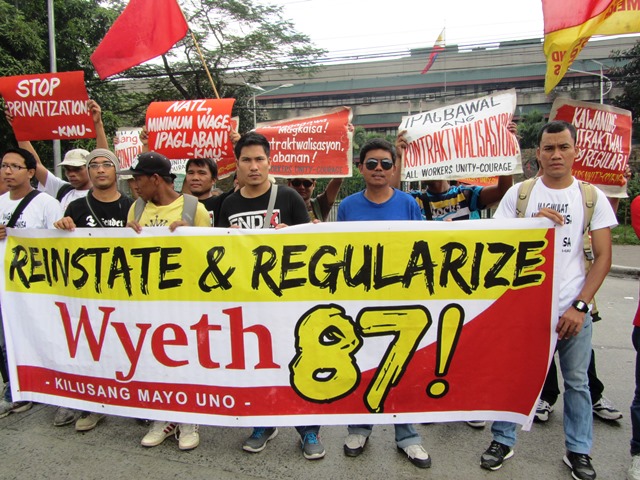 SAMA-AKO among Wyeth contractual workers whose 87 members were dismissed on the job after they formed a union last year also shared that “it is normal” for contractual workers to work 12 hours a day. Some companies pay their overtime work, and it becomes a way for the low-wage contractuals to augment their low income.

Contractualization has also become the dreaded future of the youth. “Most young people now are subjected to worse working conditions, cheaper labor and endless ‘endo’ (end of contract) cycles because of contractualization,” Vencer Crisostomo, national chairperson of Anakbayan, said in a statement.

Similar to what the older labor leaders from the public and private sectors were saying, Crisostomo assailed the Aquino government for continuing to implement various laws and policies allowing contractualization. These include the 1974 Labor code, DOLE order no 18-A series of 2011, Executive Order 366, among others.

The youth leader said a nationwide fight is needed to push for the banning of such a ‘criminal’ employment scheme. He urged all workers to join big rallies and demonstrations for this cause.