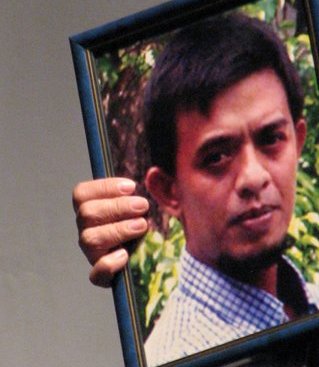 “We are up against the entire institution, which has resulted in the culture of impunity.”

Just as they fight hard to hold perpetrators accountable and surface their missing loved one, the accused, Major Harry Baliaga Jr., remains very active in the military.

He is currently in charge of looking into the application of soldiers and officials seeking clearance before the Commission on Human Rights (CHR).

Such job, under the Office of the Army Adjutant General, was once referred to by Lt. Gen. Noel Coballes as a “less sensitive” position because Baliaga, he added, is innocent unless proven otherwise.

Burgos was abducted on April 27, 2007 while in a restaurant in Quezon City. He remains missing as of this writing.

Baliaga was positively identified by an eyewitness as among those who abducted Burgos.

In October 2013, the Quezon City Regional Trial Court Branch 216 issued a warrant of arrest against Baliaga. The Phiippine Army, however, was quick to post bail, amounting to P40,000. The military also provided him with a counsel.

Now, he is one of the high-ranking officers who sign the Summary of Information (SOI) of soldiers and officials, which is submitted to the CHR. The CHR in turn issues a clearance that the officer has no record of human rights violation.

The clearance is needed for their promotion, CHR’s Carlos Royeras told Bulatlat.com. Royeras was part of the CHR’s investigating team on the Burgos’ disappearance.

“He remains very active in the military,” Royeras, said.

He added that a recent five-page SOI, dated Jan. 7, was submitted before the CHR, signed by no less than Baliaga.

Asked for a reaction, Burgos’ younger brother JL said their family expected the military to coddle the likes of Baliaga.

Unlike retired Gen. Jovito Palparan, Baliaga is charged with arbitrary detention, a bailable offense, according to lawyer Ephraim Cortez of the National Union of Peoples’ Lawyers.

Palparan is facing kidnapping and serious illegal detention charges in relation to the enforced disappearance of two University of the Philippines students. He is detained at the Phil. Army custodial center in Fort Bonifacio, Taguig City.

Public officers who detained a person without legal grounds could be charged of arbitrary detention, according to the Revised Penal Code.

Although bailable, Cortez said a charge of arbitrary detention is in line with the rights’ activists stand that human rights violations, such as enforced disappearances and extrajudicial killings, are carried out as part of a government program, not on a soldier or official’s mere “individual capacity.” This was the sense of the kidnapping charge against Palparan.

During the Court of Appeals hearing in 2011, eyewitness Jeffrey Cabintoy, the busboy in the restaurant where Jonas was abducted, positively identified Baliaga as one of those who forcibly took their “customer,” the “one who was eating.”

Cabintoy said the CHR investigating panel presented to him with at least 300 photos where he identified Baliaga, who was not part of the two cartographic sketches made shortly after Burgos’ abduction.

Baliaga, the eyewitness said, was the “man who was texting” and even approached him and told him not to intervene. He added that could not forget the Baliaga’s face because he “looked like one of his friends.”

Cabintoy heard one of the abductors say that their “customer” was involved in illegal drugs. Burgos was dragged out of the restaurant, shouting that he was no criminal but an activist.

The eyewitness immediately pointed to and identified Baliaga as soon as he entered the court room in a hearing before the Special 7th Division of the Court of Appeals in May 2012.

Baliaga, for his part, said during the Court of Appeals hearing on May 23 to 24, 2012 that he was, along with his aunt, on board a bus to Baguio City at the time of Burgos’ disappearance. He claimed that he arrived in their hometown in Besao, Mt. Province on April 28, around 4 p.m., where he stayed until May 1, 2007 to join a family reunion.

The Burgos family, however, was not convinced of his alibi, saying that he failed to provide evidence of such.

Meanwhile, the cross-examination of Royeras today, Mar. 5, was reset to Apr. 13.

Baliaga told Judge Alfonso Ruiz III of the Quezon City Regional Trial Court Branch 216 that his lawyer Bumin Pasiwen could not make it to the hearing as he was not feeling well.

Cortez manifested that Pasiwen should present a medical certificate in the next hearing, which Judge Ruiz granted.

Royeras, who was part of the investigating team formed under former CHR secretary Leila De Lima was presented as one of the witnesses of the prosecution panel on Feb. 17.

During his direct examination, he said that they conducted interviews and sought for possible witnesses on the case. He added that Cabintoy positively identified Baliaga from the photos of PMA graduates as one of those who forcibly took Jonas.

In Baliaga’s motion for reconsideration filed before the DOJ in September 2013, the defense camp described the CHR’s investigation as a “result of a fishing expedition” and a “witch hunt.”