“All public officials who claim to be serving Filipinos should echo the call to save Mary Jane’s life.”

At the Labor Department in Intramuros, Manila, workers led by national labor center Kilusang Mayo Uno held a picket in condemnation of the agency and the Aquino government for “the chronic lack of decent jobs in the country and their Labor Export Policy.” These, they said, are the reasons why Filipinos like Veloso become prey of drug trafficking syndicates.

“Mary Jane is primarily a victim and should be spared from the death penalty,” said Elmer “Bong” Labog, KMU chairman. Until the government creates decent jobs in the country, he warned that Filipinos will continue to face the death penalty in many countries.

The KMU leader decried how Labor Secretary Rosalinda Baldoz “cannot even recognize that the chronic unemployment in the country is a factor that led to the predicament of Veloso and many other Filipinos.” They took issue with Labor Secretary Rosalinda Baldoz’s mere warning to overseas Filipino workers against being used by drug syndicates, which they said only reiterated the statement of Indonesian government.

“All public officials who claim to be serving Filipinos should echo the call to save Mary Jane’s life,” Labog said.

At the Mendiola Peace Arch near Malacañang, youth groups League of Filipino Students (LFS) and Anakbayan also held a protest action at about the same time as the workers’ picket, also in condemnation of “severe joblessness in the country reinforced by Aquino’s labor export policy and the new basic education curriculum, K to 12.”

The youth groups stressed how joblessness is affecting the youth. Citing Ibon data, they noted that most of the jobless come from the youth — almost half of the unemployed are youth 15 to 24 years of age, and almost a third are 25 to 35 years old. Ibon Foundation’s data said 4.3 million are unemployed, and another 6.9 million are underemployed.

Ibon Foundation also estimates that the unemployment rate remains within historical highs of 10 to 12 percent since 2000, or an average of 11 percent over the last 15 years.

“After crawling their way through college, fresh graduates will now be added to the sea of 11.2 million unemployed Filipinos. Many will have to seek for opportunities abroad as contractual workers,” said LFS National spokeswoman Charisse Bañez.

The youth also expressed fears there will be more Mary Jane if the government continues with its policies.

The youth protesters donned mock graduation attires and held diplomas which had the words “unemployment,” “ready for export,” and “cheap labor” written on them.

Like KMU, the LFS blames the Aquino regime’s labor export thrust and the lack of sustainable industries for causing the chronic unemployment in the country. 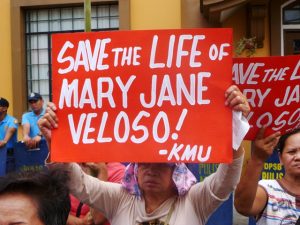 “Aquino wastes the skills of the youth and drowns them in hopelessness and misery by creating measly domestic jobs,” said Bañez. In 2014, she said, only one million new jobs were created with 40 percent or nearly half of it being part-time jobs.

The youth groups and the workers groups demand change from the government’s policies of “adhering to foreign countries’ demand for cheap labor.”

Particularly with K to 12, Bañez of LFS said it is meant to create high school graduates “ready-for-export, ready to be fed to corporations.”

“The parents and students are forced to bear the burden of additional school years, while foreign countries enjoy the perks of having a pool of cheap labor,” said Vencer Crisostomo, Anakbayan national chairman.

Instead of these thrusts and policies, the workers and youth groups demanded reforms, such as the P16,000 national minimum wage. With the increase in profit of corporations and stagnation of wages in the same period, the youth groups said a substantial wage hike is only justified.

LFS said the country doesn’t need to reform the education system through K to 12 but national industrialization that will provide sufficient jobs for the people.

Mary Jane’s background – her father who hailed from La Paz, Tarlac is a sacada or seasonal farm worker in Hacienda Luisita, her family lived in deep poverty and misery due to absence of genuine land reform — shows the need for genuine land reform and national industrialization, said Anakpawis Rep. Fernando “Ka Pando” Hicap in another statement. He explained that these thrusts alone would provide the poor sectors jobs and sources of livelihood, and they would not be compelled to seek dubious work abroad.

The group said most OFWs come from peasant families or poor workers in small town centers, and that their having migrated “is primarily due to the government’s failure to realize genuine land reform and national industrialization.”